In June, a group of investors led by the former Citigroup investment banker Michael Klein reaped more than $60m from a $25,000 investment. The stunning return was achieved in less than two years. More impressive still: it was only a partial sale and their remaining stake is worth about $400m.

The windfall helps explain why special purpose acquisition companies — which raise cash on the stock market and hunt for a private company to take public — have become the hottest product on Wall Street.

Few have replicated Mr Klein’s success, which he achieved after using a Spac to take the data company Clarivate Analytics public in 2019. But many have tried. The prospect of quick riches has attracted all sorts of copycats from hedge fund managers to retired political figures and sports executives.

So far this year, 156 Spacs have raised more than $55bn, and 76 Spacs in the US have announced acquisitions with a combined value of $95.2bn, according to the data provider Refinitiv.

A Financial Times analysis of Spac deals by four prominent sponsors of the vehicle within the last two years shows just how lucrative the structure can be for the sponsors who are paid in the form of a “promote”.

Sponsors argue that public investors have the option to not invest. Still their money is tied up. It’s a great deal for the promoters and underwriters

The promote usually involves sponsors taking 20 per cent of the Spac’s equity for a nominal purchase price of $25,000. That stake converts into a smaller slice of equity in the new company when the Spac executes a merger, and can lead to a big pay-off if, like Clarivate, the acquired company prospers.

The analysis found that promotes for the four sponsors were now worth a combined value of almost $2bn across the 10 deals.

The biggest rewards have naturally come from companies that have performed well on the stock market. However, even those Spac-sponsored companies that struggle can leave backers holding sizeable profits.

Bill Ackman, the hedge fund billionaire, believes the structure is “one of the greatest gigs ever for the sponsor”.

“You get 20 per cent of the company tax free until you sell the stock,” he told the FT. “That’s why you have so many people doing it.”

Mr Ackman launched his own Spac this year, Pershing Square Tontine Holdings, which in July raised a record-breaking $4bn. However, he chose not to create founder shares.

“[The] compensation structure [on the standard Spac] creates a misalignment of incentives,” Mr Ackman said. “The massively dilutive nature of founder shares often makes it difficult to complete a deal on attractive terms for the Spac’s shareholders.”

The promote has also caught the attention of Jay Clayton, the chairman of the US Securities and Exchange Commission. He expressed concern about the impact on ordinary investors. “We want to make sure that investors understand those things and then at the time of the transaction . . . that they’re getting the same rigorous disclosure that you get in connection with bringing an IPO to market,” he recently told the CNBC business news channel.

Public investors ‘in the hole’

Founder shares, given out for a pittance, can create a drag for ordinary investors who typically pay $10 for each of their shares in a Spac. After a deal, the company can even fall in value and sponsors with discounted shares may still come out ahead.

“The public Spac investors start, effectively, 25 per cent in the hole,” said Steven Kaplan, a private equity expert at the University of Chicago Booth School of Business, referring to the 20 per cent promote and other standard fees. “Sponsors argue that public investors have the option to not invest. Still their money is tied up. It’s a great deal for the promoters and underwriters.” The promote is typically viewed as payment to the sponsor for their efforts in finding the target company and executing the merger. That work often includes installing a management team for the company as well as locating other cornerstone investors for the deal.

For his stable of Spacs, branded Churchill Capital, Mr Klein’s investors include his own firm, M Klein Associates, and other financial backers including Oak Hill Capital and Magnetar Capital, as well as a team of “operating” partners with industry experience such as Ford’s former chief executive Alan Mulally and Apple’s former design chief Jony Ive.

Mr Klein also uses his eponymous firm M Klein and Company as an adviser on all his Spac deals, raking in millions of dollars. Churchill has separately agreed to pay The Klein Group, an affiliate of his advisory firm, almost $50m on the three deals agreed so far. Mr Klein declined to comment.

That is not the end of the list of ways in which Spac sponsors can juice their returns. Typically they get the option to purchase warrants in the Spac, which allow them to buy shares of the merged company at a particular price. If the stock rises to the point that the warrants are in the money — typically this happens at $13 — the sponsor has another inexpensive source of profits in addition to the promote and deal fees.

In an email, Mr Palihapitiya said it would be “inaccurate” to analyse the value of the promote without considering additional cash he had put into the company. He also invested $100m in Virgin Galactic at a cost of $10 a share when it went public.

Mr Palihapitiya, who together with Mr Osborne has raised another $2.1bn through three new Spacs, has separately committed at least $150m to his subsequent merger targets.

The good times ending with ‘Spac-offs’?

There are signs that the promote is becoming less lucrative for sponsors. A consequence of the boom in Spacs is that private companies can now negotiate a better deal. In “Spac-offs”, private companies pit various cash shell suitors against each other. The final deal terms are now increasingly seeing promotes whittled down, to the favour of the selling companies.

When Mr Klein’s Churchill announced in 2018 that it would merge with the private equity-backed Clarivate, it agreed to an unusual provision that it said better aligned itself with other shareholders. Stock belonging to the promote group would not fully vest until Clarivate’s stock price hit $17.50, and lockups were put in place to prevent the investors from dumping the stock straight away.

That moment in June in which Mr Klein and his partners cashed in more than $60m came after the stock had doubled to more than $20, in part thanks to a deal to buy the intellectual property management and technology company CPA Global. Onex and Barings, the two private equity firms that owned Clarivate before it went public via Mr Klein’s Spac, also sold stock at the same time.

Clarivate’s share price has since risen to $27.69, so the value of Mr Klein’s remaining stake has continued to swell and his investor group still holds shares worth $395m. The group also has separate warrants on top further augmenting their potential profit.

Another successful Spac deal, involving the sports-betting site DraftKings, has soared to as high as $63 a share less than a year after announcing its merger in December. Its backers, serial Spac sponsors Mr Sloan and Jeff Sagansky, made similar concessions in merging their vehicle with DraftKings by giving up a portion of their promote and only letting some of their shares vest at higher stock prices. Still, their promote stake today is worth more than $200m.

Repeat success has, however, not come easy for most sponsors. A second deal from Mr Klein, in which he closed an $11bn merger with the healthcare group MultiPlan this summer, has not fared as well as Clarivate. MultiPlan’s shares have traded down to below $8, threatening the ability of Churchill Capital to earn all its promote shares. Still, Churchill sponsors have a stake worth almost $80m. 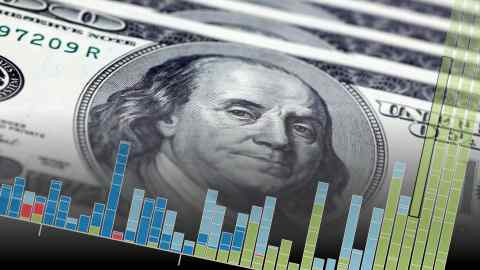 MultiPlan attracted the attention of short-seller Carson Block, who this week revealed he had placed a bet its share price will fall. At the same time, he launched a broadside against the whole Spac phenomenon, which he called “the great 2020 money grab”.

“A business model that incentivises promoters to do something — anything — with other people’s money is bound to lead to significant value destruction on occasion,” his investment firm Muddy Waters wrote.

Whatever the ultimate outcome for MultiPlan, Mr Klein’s ventures have already highlighted the asymmetry of Spac mathematics: the risk in Spacs falls most heavily on outside shareholders even as the return on investment for sponsors looks very promising indeed.

Previous Post“Lockdowns For Thee, But Not For Me” – Newsom, Pelosi Attend Dinner Parties While US COVID Cases ExplodeNext PostOne Third Of Biden’s Pentagon Transition Team Funded By Weapons Industry