Entrepreneurs in California were pioneers of the American oil industry in the 19th and the beginning of the 20th century. One of the oldest still producing oil fields in the U.S. is located in the Golden State in which in 1901 the Midway-Sunset field was discovered.

California was one of the pillars of American energy security. That, however, has changed due to declining production. Since its peak in 1985, production has plunged almost 60 percent to 460,000 barrels per day. Next to this, the Golden State’s oil reserves have declined 25 percent to 2.2 billion barrels. This reversal doesn’t only impact the state’s economic situation, but also its position towards foreign producers who are increasingly required to supply the necessary oil.

California’s demise as an essential producer of hydrocarbons is especially staggering due to the transformation of the American fossil fuel industry. The shale revolution has propelled the North American country into becoming one of the world’s largest producers of fossil fuels. U.S. crude oil production has soared to record heights, rising 140 percent in a couple of years to 12.1 million bpd. North Dakota has become the second oil producing state in the U.S. due to the shale revolution. Fracking technology has unlocked previously unreachable resources which have doubled U.S. oil reserves to 45 billion barrels. 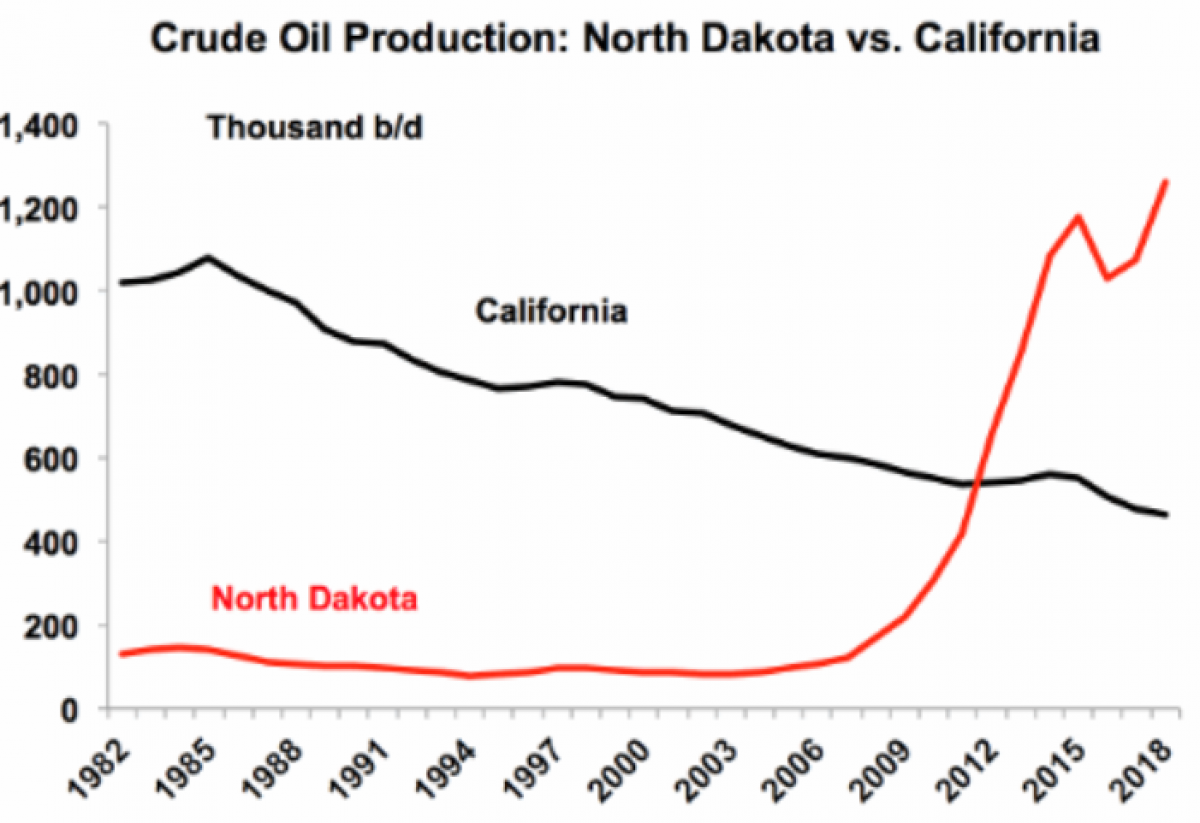 Ironically, California is the second biggest consumer of oil in the U.S. after Texas. Approximately, 40 million gallons of gasoline, 8 million gallons of diesel, and 20 percent of the country’s jet fuel are consumed in the Golden State each day. Notably after Alaska’s production decreased significantly over the years, California has become more dependent on Middle Eastern oil due to stringent environmental rules. The Low Carbon Fuel Standard (LCFS) has hampered the prospect of using heavier crude which is produced locally and in Canada. Instead, lighter oil that is supplied by OPEC’s member states, for example, makes up for 37 percent of California’s oil imports. Related: Why Gasoline Prices Could Be About To Rocket

The state’s predominantly Democratic electorate and leadership generally opposes pipelines that could pump high-quality, lower cost shale oil from other U.S. states. California does hold some promising shale formations in its central and southern parts which could hold at least 20 billion barrels of recoverable oil and gas. Current Governor Gavin Newsom, however, is not supportive of the shale industry. According to a study by the Price School of Public Policy at the University of Southern California, fracking could add millions of jobs and tens of billions in tax revenues. California, however, has chosen a different path when it comes to energy policy.

Despite President Trump’s unilateral withdrawal from the Paris Climate Agreement, the Golden State has declared its commitment to combatting climate change. California’s geography is highly favorable for wind and solar energy production. In addition, the state has set itself the goal of having at least 5 million electric vehicles on the roads by 2030. Although this sounds impressive, it adds up to only 15 percent of the entire car fleet which means that the majority of vehicles would still be running on fossil fuels.

Despite the energy transition, natural gas is still the most important source in the energy mix in the Golden State. In the short term, California could be even worse of when it comes to gas due to declining regional production and reluctance to allow fracking. Already, 95 percent of the consumed gas is imported while neighboring states are increasing their share of natural gas in the energy mix due to environmental and cost-efficiency reasons. Growing competition could lead to an undersupplied market and relative scarcity which increases costs and dependency on foreign suppliers. Fortunately, that doesn’t seem to be the case anytime soon due to the massive influx of fracked natural gas which has lowered energy prices significantly in the U.S.

However, ‘continued decline’ instead of ‘collapse’ are more appropriate words to describe the Californian oil and gas industry. The state’s energy outlook isn’t promising due to the decreasing local production and continued dependence on foreign suppliers which could affect the state’s economic and strategic position without a significant impact on the environment.

READ ALSO  The new kings of the bond market