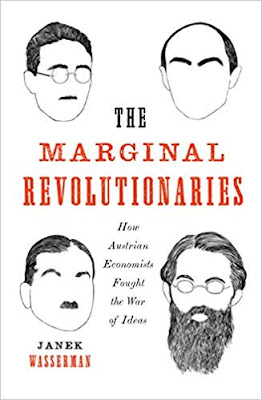 After reading the Jeff Deist review of The Marginal Revolutionaries: How Austrian Economists Fought the War of Ideas by Janek Wasserman. I picked the book up.

I have to say, Deist nailed it in his review. Here are some snippets:

The Marginal Revolutionaries: How Austrian Economists Fought the War of Ideas is indeed a critique of the broad school of economic thought now colloquially referred to as “Austrian,” but it is not only that. It is also a lively and well-paced history of the astonishing influence prewar Viennese intellectuals had on the greater world, and continue to have in areas far beyond economics. The author’s ideology intrudes at times, but never quite so obtrusively as to derail the book’s mission. The Marginal Revolutionaries first and foremost is a worthwhile historical account of major figures from the Austrian school, and not primarily an attempt at academic or ideological refutation…

But Wasserman cannot help indulging himself in the book’s concluding chapter, with its tedious concerns about a so-called Libertarian-to-Alt-Right Pipeline, laughably worried references to supposedly controversial libertarian figures like Murray Rothbard and Ron Paul, and tut-tutting details of internecine fights between the Koch-funded Cato Institute and the Koch-free Mises Institute (your reviewer’s employer)…

[O]ne senses Wasserman’s heart is not in examining the sociology of late twentieth-century libertarianism and issuing indictments. As an historian of central Europe, he’s happier considering the familiar turf of coffeehouse Vienna, and thus finds firmer footing at the beginning of the book — particularly in his opening chapters on the early period and then “golden age” of Austrian economists.

Here we find a fairly robust account of Carl Menger, widely considered the father of the Austrian school owing to his seminal 1871 Principles of Economics, published in Vienna. Menger was less prolific than most of his successors, and almost reclusive later in life. As a result, Principles was not fully appreciated for two decades, until Menger’s publication of a second major book on method in 1883 revived interest in his work. But Wasserman seems to grasp the enormity of Menger’s contribution to a theory of value, an understanding desperately missing from classical and Marxist economics in the late nineteenth century. Wasserman duly credits Menger with helping to birth the “Marginal Revolution,” the critical understanding of how consumers determine the value of any good subjectively, based on the importance of the final, marginal unit of that good to them…

But The Marginal Revolutionaries is a history, not a novel, and thus the central portion of Wasserman’s book deals with dozens of other figures as well. Names like Morgenstern, Haberler, and Machlup will escape most lay readers, while the dates, places, and myriad controversies fade into obscurity. So while Mises and Hayek stand today as the best-known Austrian economists, and giants in their field, the book is a survey with no one figure taking prominence.

I will second Deist’s complaint about the final chapter. The earlier chapters of the book reflect significant research and deep contemplation about the advances of the Austrian school and the different players involved but the last chapter is a completely different animal. It seems to be thrown together after just a short read of some Twitter feeds.

That said, the overall depth of reporting in the rest of the book is detailed and original enough that for anyone interested in the history of the Austrian school the book is a must read.

One example is Wasserman’s reporting on the role of Fritz Machlup (a member of the Mises Circle in Vienna) in the founding of the G30, which is now a major international group of leading financiers, policymakers and academics. I had known of Machlup’s role in the formation of the G30 but there is much more detail in the book:

Writing to Haberler and the economists Willy Fellner and Robert Triffin in 1982, [Fritz] Machlup reminisced about the decades-long collaboration on advisory boards: “the four of us were once called ‘the Quartet’…I can assure you I miss the presence of you [at the group of 30 or G30].”  The G30, a powerful consulting group formed in 1978 to address the problems in the global economy, evolved out of a series of conferences on the international monetary system that “the Quartet’ had orchestrated in the early 1960s. Over twenty-seven meetings Machlup and his colleagues reshaped the Bretton Woods landscape, providing the intellectual foundation for the shift from the post-war gold exchange standard to floating exchange rates and financial liberalization. In coordinating elite networks of academics, government officials and financial leaders, the Machlup Group proved as significant to the neoliberal order as Hayek and the MPS or Habereler and GATT.

Of course, neither Ludwig von Mises nor Murray Rothbard would have supported the anti-gold direction that Machlup took governments, but this is the history that includes, and helps to understand, the breaks and different directions that former students of Mises and Hayek made, for good and bad.