Home Financial news The Revivalist Movement to End the “Sin” of Capitalism and Free Market Liberalism
2019-10-232019-10-23By finanz.dk 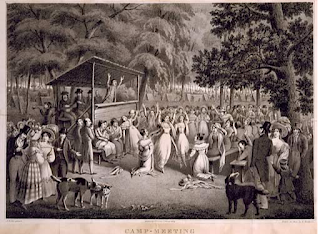 In a new essay Richard Ebeling makes some important points about the current state of collectivist thinking in America:

America and some other parts of the world are facing a “revivalist” movement, but rather than being a religious revival, it is an ideological revivalism calling for a turn away from freedom and the open society, and back to an earlier societal tribalism and tyranny.

It cuts across the usual political spectrum because what one finds is a common faith in political and economic collectivism, but a common faith that is divided up into several “denominations,” each of them asserting that it is the one true and good collectivism. But all are united in a condemnation of and opposition to free market liberalism, with its dedication to and respect for the individual to peacefully live his own life in voluntary association with his fellows for mutual benefit and betterment.

But what they really represent, I would suggest, is a call for a return to variations on the older system of social order before the rise of (classical) liberal thought and policy that ran through the 18th and 19th centuries, and even into the 20 century. These collectivists are all, in fact, counter-revolutionaries – since certainly the idea that individuals should be free to control and direct their own lives in peaceful cooperation with others through free market transactions and the voluntary arrangements of the institutions of civil society was profoundly revolutionary.

Our “progressive” collectivists, therefore, should be considered, instead, as “regressivists,” wishing to return to atavistic conceptions of group control and command over all that the individual does, in his personal, social and economic affairs.

We seem to be living in just such a time of ideological collectivist revivalism. It is the “new” one true faith, with its priests and disciples appealing to join the just cause to redeem humanity from the sins of individualism, self-interest, private property, freedom of association, and free market relationships. The “We,” once again, is being said to be above the “I.”

If necessary, the “I” will be denounced, demonized, and psychologically and culturally decapitated. He must be exorcised from the political body. He is the devil manifested as “the one percent,” or the “racist and sexist,” or “the globalist” or the “nationalist” or the . . .
The ideological devil worse than any competing collectivist heretic who is proselytizing for the “wrong” group, tribe, or collectivist cause is the free market liberal, who denies the collectivist god, who insists that the individual must be considered above the group, because separate from individuals, there are no groups. Individuals have existence, meaning and purpose. It is the collectivists who are preaching to believe in and follow things that do not exist outside of the minds of those who wish to play a political paternalist god.

And who they are:

Combined, these collectivist charges add up to a worrisome and potentially dangerous threat to what has been generally understood as the free society, over especially the last three hundred years or so.