The Political Engima Of The Crude Oil Market Going Into 2021 (NYSEARCA:VDE)

Crude oil is one of the most political commodities. More than half the world’s reserves are in the Middle East. For decades, the United States strived to establish energy independence. Massive discoveries of reserves, technological advances in extracting oil and gas from the earth’s crust, and fewer regulations over the past four years achieved the goal. Under the Trump administration, daily crude oil output rose above the levels from Saudi Arabia and Russia.

In 2016, President Trump ran on a drill-baby-drill and frack-baby-frack platform, promising to eliminate many regulations to expand production. He delivered on those promises. Last week’s 2020 contest between President Trump and challenger Joe Biden was a referendum on many policy issues, including the future of US energy output.

It may be counterintuitive that energy shares fell sharply during the Trump administration. The shares of oil and gas-related companies were steadily declining before the global pandemic. COVID-19 made their prices evaporate. The administration that supported US production did not cause profits and higher share prices for oil and gas companies. In an environment where the stock market moved substantially higher over the past four years, crude oil and oil-related shares went the other way. Time will tell if the counterintuitive enigma of the crude oil market and related companies will continue over the coming four years. The Vanguard Energy Index Fund ETF Shares (VDE) holds a portfolio of the leading US energy companies.

As of the time I am writing this article, there was no declaration of a winner in the 2020 US Presidential election. However, the ballot trends in the remaining states point to an eventual victory for challenger Joe Biden. On November 7, the networks projected that he won the election, and he declared victory. Meanwhile, the close election will wind up in a legal fight over the coming days and weeks. The electoral college, which ultimately selects the President, will not convene until mid-December.

The election was a referendum on many issues, including the future of US energy policy. Democrats favor moving away from or banning fossil fuels. Republicans advocate for energy independence from foreign sources. The Middle East is home to more than half the world’s oil reserves. For decades, the United States has sought to satisfy its energy requirements with domestic production. Technological advances over the past years allowed for oil and gas production from the United States’ shale regions. Fracking became one of the primary methods of extracting energy commodities from the earth’s crust. Meanwhile, fewer regulations over the past four years lifted US daily energy output to a point where the US surpassed Saudi Arabia and Russia.

Democrats favor alternative fuels, while Republicans advocate for the status quo. With the Democrats likely to capture the White House and a majority of Democrats in control of the House of Representatives, it looks like crude oil and natural gas came up as losers in the election. However, the Republicans still have a chance to retain their control of the Senate, which would temper the enthusiasm for far stricter regulations and potential bans on fossil fuel production in some regions of the United States.

President Trump and a Republican Senate supported the US energy industry. While the coronavirus caused demand to suffer a substantial decline, energy shares were in a funk for years prior to that. The Vanguard Energy Index Fund ETF Shares (VDE) holds shares is the leading US traditional energy companies, including: 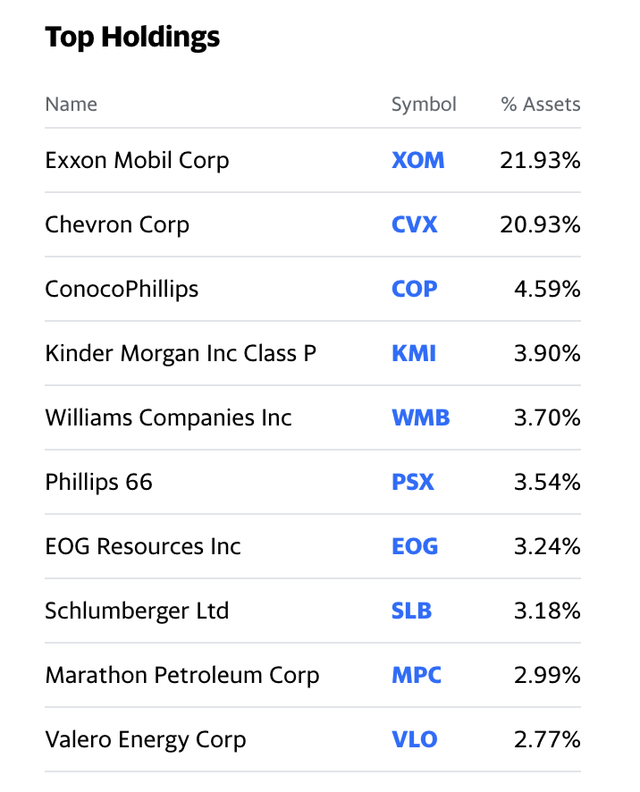 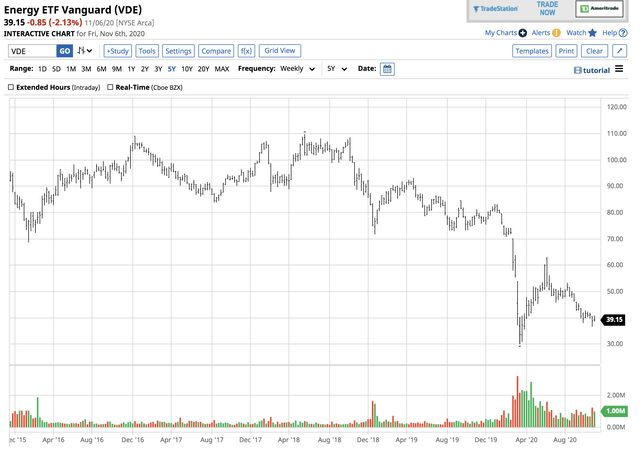 The chart shows that from November 2016 through November 2018, VDE traded in a range from $83.80 to $109.79 per share. After reaching the high in May 2018, energy shares and the VDE ETF have made lower highs and lower lows. In March 2020, as coronavirus-related risk-off conditions gripped the world, VDE dropped to a low of $30.03. On Friday, November 6, the ETF settled at $39.15, a little over $9 above the recent low. While the stock market is significantly higher in 2020 and over the past two years as of the end of last week, the energy-related stocks remain not far from their lows. On Election Day in 2016, VDE was trading over $90 per share. It has more than halved in value over the period. NYMEX crude oil futures were around the $45 per barrel level at the same time in 2016 and was at $38 on November 3, 2020, 15.6% lower. Shares of energy-related companies underperformed the stock market and did a lot worse than the energy commodity.

The Trump administration’s support for US oil and gas production translated to losses for traditional energy-related shares, which was counterintuitive.

After a recovery from $30.03 in March to a high of $63.10 per share in early June, VDE declined to its most recent low of $36.62 in late October. At $39.15 at the end of last week, the ETF was a stone’s throw away from the most recent nadir. Polls had projected a blue wave in last week’s election, with a landslide win for Joe Biden, more Democrats seated in the House, and a majority of Democrats in the Senate. The election was far from a landslide as razor-thin margins did not push either candidates’ electoral college count above the 270 level as of late last Friday. Even if networks decide to call states that drive Joe Biden’s total above that level, a series of court battles are on the horizon. Even if the arguments turn out to be specious, the election results are so close in states like Georgia, Pennsylvania, Nevada, and others, that recounts and accusations need to receive legal consideration.

READ ALSO  12% Yield To Maturity Is Not Worth The Risk For Exterran Corporation Bonds (NYSE:EXTN)

Meanwhile, in Georgia, a Senate candidate must receive at least 50% of the vote to prevent a runoff election that would occur in early January. With the Senate at 48 Democrats and 48 Republicans at the end of last week, the two Senate contests in Georgia will determine the Senate’s balance of power. If those seats were to go to Democrats in January, Chuck Schumer would replace Mitch McConnell as Senate Majority Leader, creating a clean sweep for Democrats to run their legislative agenda. Therefore, the future of US energy policy comes down to a pair of Senate elections in Georgia. While Joe Biden is likely to govern from the center, control of both houses of Congress would allow the progressive wing of his party to push him to the left and adopt a far stricter environment for energy production in the US. The most recent price action in energy-related shares could reflect the uncertainty of the balance of power that would influence the energy agenda for the coming years.

Bullish price action in crude oil is possible and even likely

As last week’s election approached, the number of coronavirus cases were rising in Europe and the US. A second wave of the virus over the coming months world wreak havoc with energy demand if lockdowns become necessary. The price of crude oil had begun to decline on October 21 and continued lower with a spike to the lowest level since late May on November 2, the day before the election. 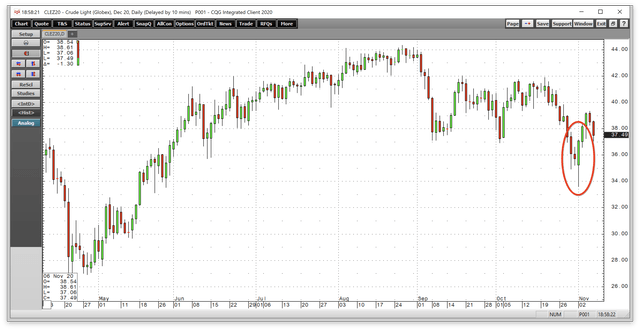 As the chart shows, after falling to a low of $33.64 on November 2, the price action turned higher and put in a bullish reversal pattern on the daily chart. Crude oil was trading at over $37 per barrel at the end of last week.

The following factors could support higher crude oil prices over the coming months:

If 2008 through 2012 is a model for 2020 and the years ahead, we should expect higher commodity prices. The global financial crisis was far different than the worldwide pandemic. However, the central bank and governments’ actions are the same for treating the worldwide economy. NYMX crude oil futures fell to $32.48 in 2008. By 2011, the price traded to a high of $114.83 per barrel.

If energy-related shares fell in an environment where the US administration was highly supportive of the business, the opposite could occur if a change in energy policy tightens regulations and limits output. Those actions may have the unintended consequence of handing control of fossil fuel supplies back to the international oil cartel and its unofficial leader, the Russians.

In a stock market where it is more than a challenge to locate value, oil and gas could be a hidden gem at current valuations. Consolidation should continue across the energy sector as debt-laden companies sell assets or are acquisition targets for the leading companies with the most robust balance sheets. The weak are likely to get weaker or disappear, but the stronger companies could thrive as they acquire assets for pennies on the dollar. The VDE product holds shares in the leading integrated oil and gas, refining, and oil services companies in the United States. The VDE ETF pays holders a blended yield of 6.75%, which is highly attractive in the current environment and compensates for the low expense ratio of only ten basis points, which is lower than the XLE.

The worst performing asset class during one period often becomes the best when it decides to correct. Energy has been a laggard over the past years, and it offers value. Just ask Warren Buffett, who turned around and more than doubled his exposure to natural gas transmission in June when the natural gas price fell to a twenty-five-year low.

Energy stocks are dirt cheap. A contrarian approach and risk-reward favor the upside. The VDE product diversifies risk among the leading US traditional energy-related companies.

The Hecht Commodity Report is one of the most comprehensive commodities reports available today from a top-ranked author in both commodities and precious metals. My weekly report covers the market movements of over 20 different commodities and provides bullish, bearish, and neutral calls; directional trading recommendations, and actionable ideas for traders.