The Political Colour of Fiscal Responsibility: Trump’s Fiscal Policy as a Republican Tradition

Yves here. It really is perverse that Democrats have become the party of spending scolds and fiscal worrywarts. But this post suggests that this behavior has become typical of left parties…which given how far right the Overton window has moved everywhere, means “liberal”.

Note that this post fails to distinguish between currency issuers and currency users. For currency users like Eurozone member states, governments need to worry about debt levels. However, it also fails to consider that politicians merely need to believe in mainstream economic views about government deficits and debt for that to influence their behavior; those stories don’t have to be true.

The growth of the US national debt during the Trump presidency is particularly remarkable given its overlap with a period of economic expansion. But in this regard if few others, the Trump administration is no outlier. This column challenges the claim that Republicans adhere to fiscal conservatism in debt policy. Instead, it shows that Republican administrations since WWII have been more prone to expand government debt than their Democratic counterparts. And broadly speaking, the same pattern emerges in a panel of OECD countries.

In an article published in the New York Times on 25 October 2019, Alan Rappeport notes that the US federal budget deficit has swelled to $984 billion, and is expected to top $1 trillion in 2020. Annual budget deficits have now increased for four consecutive years, in a period during which the economy has been booming. According to Rappeport, “the grim fiscal scorecard shows how far the Republican Party, under Mr. Trump, has strayed from conservative orthodoxy, which long prioritized less spending and lower deficits.”

The Political Colour of Debt

In recent research, we show that since WWII, Republican administrations have systematically been more prone to expand government debt relative to Democratic administrations. Perhaps surprisingly, the same pattern emerges (with some nuances) in a panel of OECD countries. Broadly speaking, right-leaning governments choose lower taxes, lower non-defense government expenditure, and higher debt. Our findings do not challenge the common wisdom that the political right prefers smaller governments. Rather, they dispute the popular perception that Republicans adhere to fiscal conservatism in debt policy.

Determining empirically how debt policies vary with the political colour of governments (i.e. Democrats in blue; Republicans in red) is not straightforward. For example, during Republican Dwight D. Eisenhower’s presidency, the gross debt-to-GDP ratio fell from 70% in 1953 to 54% in 1961. However, this was part of a longer trend of a falling debt-to-GDP ratio after WWII, which persisted until the late 1960s. Similarly, Reaganomics coincided with a period of growth slowdown and high interest rates. On a different front, the debt-to-GDP ratio may mechanically increase during recessions because of the decline in output. This explains part of the increase in the ratio under President Obama. Changing demographics also play a role. Given that the US pension system is largely unfunded, an ageing population yields an increase in pension transfers, health benefits, and government debt.

Methodology of Our Study

In our work, we take these factors into account. First, we control for the outstanding debt-GDP ratio inherited by each government, recognising the significant mean-reverting component in debt policy (as shown by Bohn 1998). Everything else being equal, governments inheriting a ruined budget try to reduce debt and make it converge to some target level. Second, we control for demographic trends, macroeconomic conditions (measured by the unemployment rate or by an indicator for NBER recessions), and war shocks. Our original study (Müller et al. 2016) covers data until 2013, before the onset of the Trump administration. We have now extended the analysis to 2018. The results we report in this column for the US include more recent years.

Republicans Versus Democrats in the US

We find that a switch from a Republican to a Democratic presidency is associated with an annual reduction in gross federal debt (relative to GDP) of 1.8% on average, statistically significant at the 1% level. The coefficient on the lagged debt-GDP ratio is negative, confirming Bohn’s result that debt is mean-reverting.

We also find that, conditional on the debt level, Democratic administrations pursue higher taxes and spending. In particular, the US federal tax revenue over GDP increases by an average 0.8 percentage points. When looking at expenditure, we focus on federal non-defence expenditure as a percentage of GDP. Although defense is a public good, it is fundamentally different from other goods, being largely driven by wars and international factors. For a given debt level, Democratic administrations spend about 0.6 percentage points more than their Republican counterparts.

Another interesting finding is that while Democrats are less prone to issue debt on average, they pursue more aggressive countercyclical policies. When facing deep recessions, Democratic administrations expand more debt and cut more taxes. More precisely, when the unemployment rate is at least four percentage points above its average level, Democratic administrations are more prone to expand debt than are Republican administrations. Tax policy is also more countercyclical under Democrats than under Republicans. The 2018 tax reform under the Trump administration (which happened during an economic boom) conforms to this general pattern. 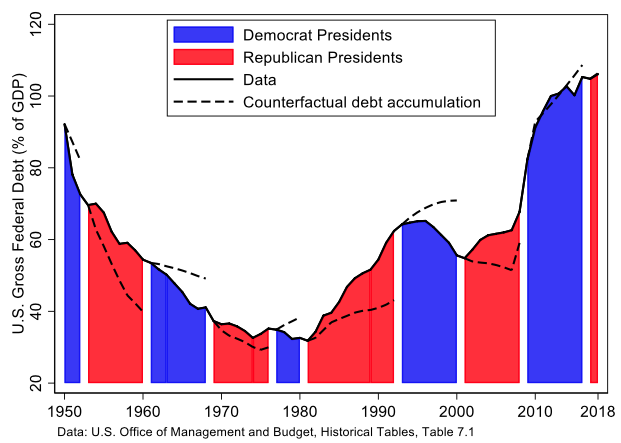 Results for a Panel of OECD Countries

The US is an ideal testing ground for how politics affects debt policy, since it has a fixed-term presidential two-party system where, since WWII, the Republican Party has positioned itself consistently to the right of the Democratic Party. Extending the analysis to a panel of OECD countries raises additional challenges. In particular, identifying the colour of governments is often problematic, due to the presence of coalition governments. For example, is the German grand-coalition left- or right-leaning? With this caveat in mind, we extend our analysis to a sample of 24 OECD economies for the period 1950-2010, using the data on government debt assembled by Reinhart and Rogoff (2010). Similar to the US, we find that left-leaning governments are consistently less prone to issue debt, even after controlling for confounding effects (we include country-fixed effects and common trends). Moreover, during the Great Recession, left-leaning governments expanded debt by an average of 2.7 percentage points (per year) more than their right-wing counterparts.

The cross-country estimates are generally smaller and less precise than in the US. This is not surprising given the measurement difficulties. However, the results are stronger and more precise if one restricts attention to countries with a majoritarian electoral system, where a clear-cut alternation in power occurs between left-leaning and right-leaning governments. In this case, a political switch to the left implies, on average, a reduction in debt accumulation between 0.6% and 0.7%, statistically significant at the 1% level.

These findings are consistent with the positive theory of government debt presented in Song et al. (2012) and its subsequent development in Müller et al. (2016). The theory postulates that the government spends its revenue on financing the provision of public goods (e.g. parks, public health services, schools, etc.) subject to an intertemporal budget constraint. We assume that the economy is dynamically efficient, implying that the government must eventually balance its intertemporal budget and that debt imposes a burden on future generations. We view this as a sensible benchmark for a long-term analysis of fiscal policy (Abel et al. 1989), even though the welfare cost of issuing debt may be low in periods of low interest rates on government bonds, as argued by Blanchard (2019). Given the looming demographic changes with a fast-ageing population, arguing the opposite case seems far-fetched.

In this environment, we introduce exogenous political shocks that shift the voters’ political support for redistribution and public good provision. During a left-leaning wave, the government increases taxation and public expenditure while reducing debt. The opposite occurs during a right-wing wave. Left-leaning governments are less fiscally conservative when it comes to debt policy because their voters not only care more about the present but also about the future provision of welfare policies. Increasing debt today crowds out future public good provision by forcing future governments to cut expenditure. While debt might also increase future taxation, the option to resort to higher taxes is constrained by its distortionary effect (a Laffer curve). Therefore, left-leaning governments are warier of increasing debt.

Our theory is related to the ‘starve-the beast’ political strategy employed by conservatives in the Reagan era, which assumed that expanding the current debt would constrain future governments and limit their spending on social programmes such as education, welfare, Medicare, and Medicaid. In the economic literature, our analysis builds on the insights of Persson and Svensson (1989), who postulate that the main difference across the political aisle is that the left cares more about the public good than does the right. They then derive implications for how reelection probabilities affect debt policies (right-wing governments will accumulate more debt if they believe they will not be reelected). Our theory is also related to the theoretical work of Alesina and Tabellini (1990) and Battaglini and Coate (2008), and to the empirical analysis of Pettersson-Lidbom (2001) and Lambertini (2003).

Like every study, we must acknowledge some limitations. We do not consider the effect of policy on the probability of different parties winning future elections. And we treat macroeconomic conditions and wars as exogenous factors.

The recent debt growth under the Trump administration is remarkable, especially since it occurred during years of economic expansion. The rhetoric of political debate might give the impression that this is an unusual behaviour for a conservative government. For instance, in March 2011, 23 Republican Senators publicly urged President Obama to reduce the deficit to protect future generations. The reality is quite different. Since the end of WWII, Republican administrations have systematically been more prone to expand debt, except during times of crisis. The Trump administration is continuing in this tradition. Our research rationalises these patterns from the standpoint of a rational choice politico-economic theory.

Although the cost of servicing debt is currently very low, we believe that the ageing population trend and slow productivity growth imply that debt will prove a heavy burden on future generations. Debt expansion should not be forbidden, but if there is (as we believe) no ‘free lunch’ in government spending, it is better to save the ammunition for a later day, when the needs for social spending and countercyclical policies loom much larger than they do today.