Investors who sell covered calls on a frequent basis oftentimes don’t have a clue as to why they are utilizing the strategy. Also, they don’t thoroughly understand the principles of management: should we adjust our positions all the time to keep our directional exposure in check or should we stay mechanical to let the probabilities work out in our favor? Before we can start examining a particular strategy, we have to able to backtest it on a sufficiently long time frame and with a couple of programmed conditions. It’s very important that we’re not only looking at the most optimal picture, but also at the most presumable outcome: are we able to manage the position in the real-life world by following the mechanics laid out in the backtesting?

Way too often, backtesting tools are programmed in such a way that they strive to create the perfect outcome, assuming human beings rely 100% on flexible but non-emotional strategy mechanics. If you’re not capable of managing your portfolio every single day, you shouldn’t backtest the historical results for day-trading or high-risk (over-leveraged) strategies, nor should you pay attention to studies performed by third parties. In my case – and for most of the OG’s premium members as well – I don’t have the time to intensively manage positions. I don’t want to over-adjust them, or become emotionally involved and make too many wrong investment decisions. Focus on what’s relevant for your portfolio strategy and risk tolerance.

With that being said, let’s dive deeper into the world of portfolio overwriting, i.e., continuously selling and rolling covered calls on a monthly basis. In this article, we’re going to take a look at American Tower (AMT). The main purpose of this article is to show our readers the impact of a mechanical and strategic covered-call writing approach on your returns and the effectiveness of adding the strategy to a diversified portfolio. It also shows the characteristics of the strategy in any market environment, the probability of success. We shouldn’t rely on backtesting to predict future returns, but utilize it as a way of gauging probability of success and risk.

The graph plotted below consists of 3 curves representing buy and hold investing (excluding dividends) and an at-the-money covered call (or as close as possible) but with a different management tactic. The red line does not roll down the strike when a correction occurs, whereas the green line continuously adjusts this ‘limit’ price. As you already know, this is the price that we’re willing to sell our shares for. Since we want to track the overall performance of selling at-the-money covered calls on AMT, we will sometimes be forced to roll out for a debit. There’s no upside beyond the strike price. If the price of the stock goes up, we roll out regardless of whether or not we’re paying a net debit. That’s because – under real-life circumstances – we still want to hold onto our long-term winners and generate time value by selecting strike prices close to their share price.

Over the past 10 years, the annual returns and annualized standard deviation (in monthly performance) from selling at-the-money covered calls on AMT would have been as follows: 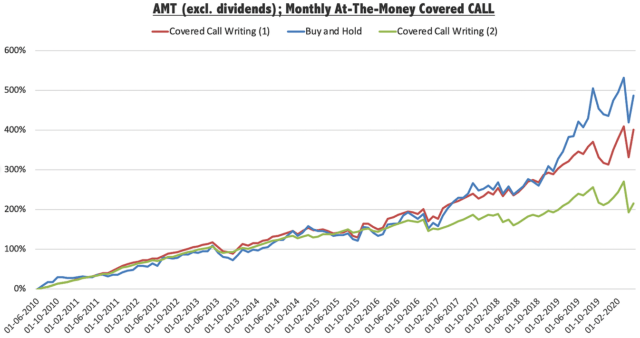 At first sight, the green line severely underperforms the buy-and-hold approach from both an absolute as well as a relative return perspective. The red line is by far the best strategy if one targets considerably higher risk-adjusted returns. However, this doesn’t tell the whole story. Historical results may not interfere with our current strategy. Let’s now take a look at the drawdowns for each strategy.

Rolling down during corrections vs. buy-and-hold strategy

Below, I’ve inserted the drawdown graph for buy-and-hold with AMT (excl. dividends) and covered call writing on a monthly with rolling down during corrections. The drawdowns are based on the values of each individual strategy in order to paint a fair picture.

During steady down markets, rolling down would have made sense if capital preservation is of key importance to you. The reasoning behind rolling down or playing defense is two-fold: we collect a higher credit by rolling down (thereby initially reducing the cost-basis) and we do so in a higher implied volatility environment. One would expect these two factors to contribute to a higher PoP (probability of profit).

For example, in 2013 the at-the-money covered call writing strategy with the rolling down tactic set a new peak 3 months earlier than the buy-and-hold investor. In 2015, the results were even better. From 2017 onwards, the loss-mitigating feature of selling covered calls, including rolling down during corrections, started to fade. Corrections in AMT’s share price tend to be followed by relatively fast recoveries, meaning a lowered strike price will completely cap our returns. Hence, the setback of this approach is that subsequent corrections and rebounds will hinder the strategy from making new highs. Also, as can be noticed on the first graph, the slope of AMT’s rally has increased substantially since 2017 leading to a greater underperformance for any covered-call like strategy.

Without rolling down during corrections vs. buy-and-hold strategy

For covered-call writing without rolling down during corrections the drawdown picture looks completely different, though, not unexpectedly. Since we don’t roll down and start losing the short delta of the call, our position will behave like 100% long stock. However, this comes at a higher reward potential than the ‘active’ covered call strategy highlighted above.

When not adjusting the strike price during corrections, we’re going to see periods of 0%-0.5% returns on our option credit. If we have a well-diversified portfolio filled with other non-correlated strategies (including hedging in low IV), we shouldn’t be too worried about our portfolio overwriting segment. Here’s where our portfolio management webinar starts to kick in, as well as the combination of complex strategies, ITM covered call writing, hedging and call LEAPs.

Although continuously adjusting your strikes in downturns has underperformed the other covered call strategy over the past decade, there were times during which it actually outperformed the passive portfolio overwriting approach (as highlighted by the black arrows). In sideways markets, collecting more credits and benefitting from IV expansion will be more favorable to the active covered-call writing strategy.

However, since 2017 more corrections have taken place along with stronger rallies leading to substantial underperformance for the active strategy, as marked by the red line. Stated differently, the volatility in AMT’s share price has since increased (especially in 2018 and 2020) thereby putting a damper on the more active covered-call strategy. 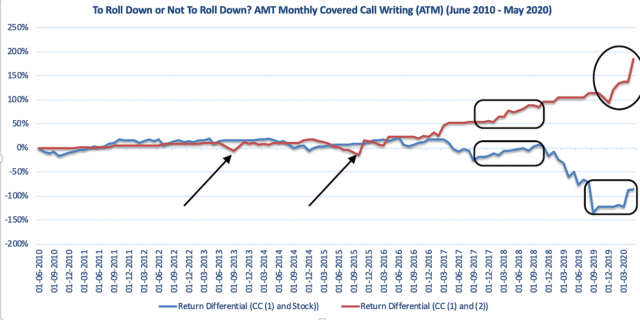 The blue line represents the return differential between the passive covered-call writing strategy and the buy-and-hold approach. Until 2017, both strategies had produced the same kind of returns but the covered-call writing strategy had outperformed on a risk-adjusted basis. In times when the slope of a stock market rally starts to increase, there are very few passive option strategies that will beat the buy-and-hold approach. In 2018, a rather volatile and rangebound year for the entire stock market, the passive covered-call strategy tried to close the gap in which it succeeded.

The more volatility we see in the share price, the worse the returns are going to be for an active, rolling down covered-call writing approach. The higher initial credits and lower cost-basis cannot offset the opportunity cost of missing out on rebound profits. In fact, the risk-adjusted returns are mediocre to the results when ‘doing nothing’.

The annual returns for each strategy are provided below.

2015 was the only year during which the active covered-call writing approach would have outperformed both buy-and-hold investing and passive portfolio overwriting.

5. Probability of profit and tail risk

When it comes to the overall probability of profit, the active covered-call writing approach will see the highest chance of success. At least, that’s what you would suggest… Since the overall profit on the strategy is substantially lower than the two other backtested strategies, there’s only one factor left on the table that can explain its underperformance: tail risk. The rolling down tactic simply doesn’t work out for AMT as we witness a higher probability of facing a 10+ % drop over the course of just one month. The odds of seeing a 10+ % rally over the course of one month? 0%… It should be mentioned that the passive covered-call strategy also sees tail risk, but to a much lesser extent.

The box plot tells the whole story: although we see a narrow distribution range in the monthly returns for active covered-call writing, we cannot neglect the tail risk pushing the average well below the median return. Tail risk shouldn’t be underestimated as highlighted in this previous article.

Only looking at correlation might be deceiving if one wants to assess risk, so let’s take it a step further: beta. The m-value in the equation of a straight line (expressed by y = mx + q) actually represents the beta, i.e. +0.807. This means that AMT is expected to move 20% less than the SPY tracker, as measured on a daily basis. Therefore, given its moderately positive correlation, an investment in AMT has lesser risk than other individual equities. 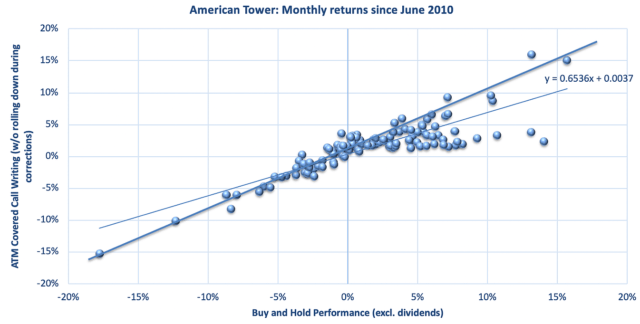 The active covered-call writing approach does see a smaller beta of 0.47, but we cannot ignore the effects of a steeper correction as stated above. The slope of the regression line changes drastically and in fact, rolling down aggressively during corrections and rolling up fast during the subsequent rallies is riskier than buy-and-hold investing. Rolling down or playing defense is therefore oftentimes mistakenly perceived as strategic management. 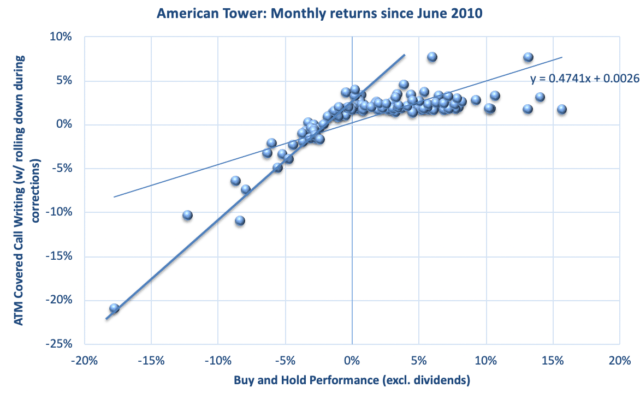 7. What about 2% out-of-the-money covered calls?

Both strategies would have outperformed the buy-and-hold approach by 18% and 10% respectively on a risk-adjusted basis.

Covered-call writing reduces the standard deviation in your P&L, but the correlation with the underlying asset remains noticeably positive as does the beta. By strategically allocating capital to covered-call writing on non-correlated assets, we can create a portfolio that has a lower beta than just buying an ETF. Portfolio overwriting is a great strategy if one doesn’t roll down and roll up aggressively during corrections and rallies. By looking at our entire portfolio and directional exposure, we should feel comfortable selling covered calls on a regular basis.

Covered-call writing is a relatively straight-forward way of investing, but it doesn’t reduce the positive correlation with buying the asset outright. It should therefore be considered a beta reductor. Future articles will dig deeper into how we can lower both the beta and the correlation on our overall portfolio, while improving the risk-adjusted returns too. The exact trade setups will be exclusively discussed with our premium members.

Disclosure: I am/we are long AMT WITH COVERED CALLS. I wrote this article myself, and it expresses my own opinions. I am not receiving compensation for it. I have no business relationship with any company whose stock is mentioned in this article.