Let’s start with an overview of the markets.

Next, let’s look at the performance table of the equity market ETFs:

All the equity ETFs had a strong week, as the markets undertook a massive counter-rally on the backs of unprecedented congressional action. The only difference was the degree of the rebound. But when the worst performer advances 9.6%, you know you’ve had a good week.

Here are the charts:

All of the ETFs hit a short-term bottom during the March 15-23 period. Last week, all rallied from those lows, usually hitting resistance at the 20-day moving average.

Next, let’s look at the core portfolio bond ETFs:

Over the last few weeks, the bond markets have experienced a high degree of illiquidity for a number of reasons. The Fed started a number of new facilities over the last two weeks to ease the pressure. The markets reacted favorably to these developments this week.

The charts show the atypical nature of the volatility

Next, let’s look at the performance table for the income portfolio ETFs:

As I noted above, the markets reacted very favorably to the Fed’s new market-backstop facilities this week. The corporate market was especially strong, advancing 20.5%.

Even income-producing markets have been volatile since the pandemic started. Remember that as companies and investors rapidly convert assets to cash, they sell all assets (stocks and bonds) indiscriminately. That’s why we’re seeing such a high degree of volatility across all asset classes.

Next, let’s take a look at how the core portfolios performed, starting with the SPY/TLT combination:

Data from stockcharts.com; author’s calculations. Green means an increase, while red means a decrease. The first number in the left column is the SPY/VEU percentage, while the second number is the TLT/BNDX percentage. If you’re more conservative, opt for the higher TLT/BNDX percentage portfolio. If you’re aggressive, reverse the process.

This week’s performance numbers show the main benefit of the SPY/TLT combination: Typically, one is rallying while the other is sell-off. Starting with the month performance time frame, the SPY was dropping while the TLT was rallying. This means that the 50/50 portfolio was remarkably stable over all time frames. And the 25/75 portfolios is still higher across all time frames. The 75/25 portfolio still performs reasonably well, all things considered.

Next, let’s take a look at the international core portfolio:

And finally, here’s the table for the 25×4 portfolio:

The overall loss rate is very acceptable given the extremely high volatility over the last few months. I’d take a 6% loss or the quarter any day.

Here’s a chart of how these three portfolios performed: 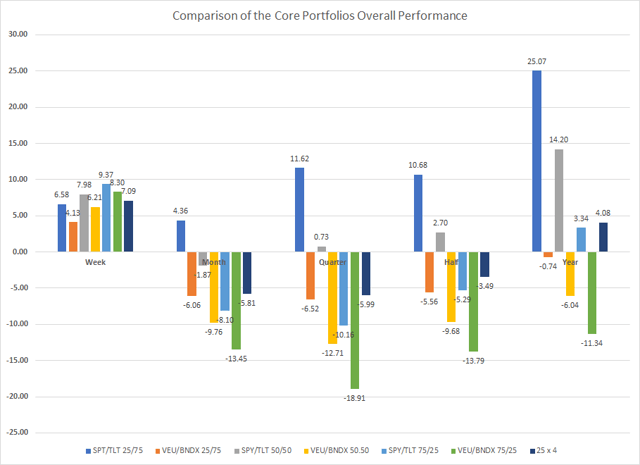 Note the gray bar, which is the second from the left in each series. That’s the 50/50 SPY/TLT portfolio, which has performed very well during all five time frames. The dark blue bar (last on the right in all series) is the 25×4 portfolio, which (again, all things considered) has held up as well.

Now, let’s take a look at the two core income portfolios, starting with the conservative one:

Remember that due to the low interest rate environment, I’ve added to higher-yielding stock ETFs (PFF and VYM). This has increased the volatility of the portfolio, which is an unfortunate byproduct of a low rate environment. Still, the overall performance isn’t that bad in such a volatile environment. As of Friday’s close, this portfolio has a 3.42% yield.

Here’s the performance table for the more aggressive income-producing portfolio:

The performance is obviously more volatile since three-quarters of the portfolio comprises equity-based income-producing investments. This portfolio has a 4.39% yield as of Friday’s close.

Here’s a chart of the two portfolios’ performance over various time frames: 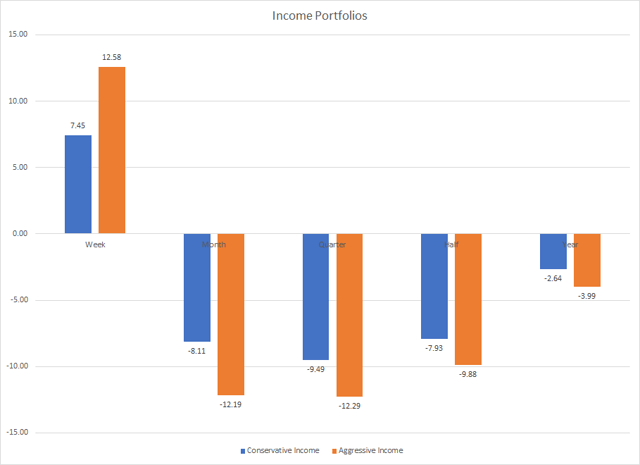 Over the one, three, and six-month time frames, both portfolios have been fairly volatile. But over the one-week and one-year time frame, they’re held up pretty well.

Finally, let’s take a look at the sector performance table for the last week. Remember, I’ll start to use these to varying degrees once we get a bit more visibility.

Last week, all sectors rallied. But notice that the top two performers were defensive: real estate rose 17.59% while utilities advanced 17.48%. That indicates traders are clearly concerned enough about the future to avoid higher-risk areas of the market.

Here are the charts of all the sectors:

All are bouncing off lows, usually hitting resistance at the 20-day EMA. So far, this is a pure relief/dead-cat bounce rally, which means that before we start thinking about adding these to a portfolio, we should wait until there is at least a retest of lows.

That’s it for this week. Stay safe during this crazy time until next week.