The Only Hope For Oil Markets

U.S. West Texas Intermediate crude oil futures are edging higher on Friday as traders shrug off worries about an economic slowdown in China and Brexit uncertainty, and shift their focus toward bullish signals from both the Chinese and U.S. refining sectors. The latest U.S. government inventory numbers came in well-above expectations, but traders seem to be unfazed by the news.

Despite erasing earlier losses on the daily chart, the markets are still on track to finish the week about 1% lower.

China released third-quarter GDP figures on Friday showing the economy grew 6.0% from a year ago. This was weaker than analyst expectations for a 6.1% gain. Beijing’s protracted trade dispute with the U.S. has weighed on its economy, with growth slowing to 6.2% in the last quarter, its slowest pace in 27 years. This could lead to lower future demand growth.

A slightly friendly intraday trend is developing on Friday in reaction to bullish signals from both the Chinese and U.S. refining sectors.

China’s September refinery throughput, was up 9.4% year on year at 56.49 million tonnes, boosted by new refineries and some independent refiners resuming operations after maintenance.

China emphasized Thursday that the U.S. must remove tariffs in order for the two countries to reach a final agreement on trade, Ministry of Commerce spokesman Gao Feng said.

“China’s position, principle and goal for the China-U.S. trade negotiations has never changed,” Gao said in Mandarin at a weekly press conference, according to a CNBC translation.

“Both sides’ ultimate goal for the negotiations is to end the trade war, cancel all additional tariffs,” he said. “This is good for China, good for the U.S. and good for the world.”

Crude oil is being underpinned by the hopes that a Brexit deal between the United Kingdom and the European Union could prevent an economic recession in the Euro Zone.

On Thursday, U.K. Prime Minister Boris Johnson said “we have a great new Brexit deal” via Twitter. He then called on British lawmakers to back the deal when it’s put before Parliament on Saturday. Meanwhile, European Commission President Jean-Claude Juncker tweeted that the deal was a “fair and balanced” one.

The U.K. Parliament has yet to approve the deal before it can be implemented, and this is a problem for investors.

“At the moment, the parliamentary arithmetic is somewhere between “extremely tight” and ‘no’” said Constantine Fraser, a political analyst at TS Lombard. But the “main takeaway is that the Conservative party is now committed to this deal, not no-deal, and will campaign for a majority for it.”

The EIA reported on Thursday that U.S. crude supplies climbed for a fifth week in a row, by 9.3 million barrels for the week-ended October 11. Traders were looking for a 4 million barrel increase.

Traders said the buildup was led by the refinery utilization rate dropping to its lowest since hurricane Harvey in September 2017.

Helping to mute the reaction in the crude oil market to the bearish news were solid draws to both gasoline and distillate inventories.

The buildup in U.S. stockpiles and the broader concerns over Brexit and U.S.-China trade tensions are likely to be the biggest influences on crude oil prices over the near-term.

We should know the outcome of the Brexit deal by Saturday, which could cause volatility early next week. A U.S.-China trade pact seems impossible over the short-run, and as long as the tariffs remain intact, even a partial deal won’t have much of a positive impact on the global economy and future demand growth for crude.

The only hope for stabilizing prices will be a decision in December by OPEC and its allies to make deeper supply cuts. 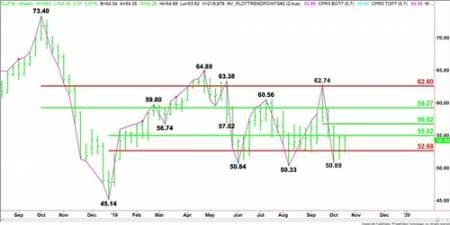 There has not been much movement on the crude oil chart during the week-ending October 18. The main trend is up according to the weekly swing chart, however, momentum is decisively lower. The main trend turned up four weeks ago after missiles destroyed Saudi oil production facilities.

Prices fell sharply when repairs to the facilities were accomplished quickly with a relatively low loss of production, however, sellers have been unable to take out the bottom put in before the attack. This is helping to maintain the slight upside bias. A trade through $50.33 will change the main trend to down.

Based on this week’s price action, the direction of the December WTI crude oil market the week-ending October 25 is likely to be determined by trader reaction to the minor 50% level at $55.02.

A sustained move over $55.02 will indicate the presence of buyers. If this move creates enough upside momentum then look for a potential surge into the pivot at $56.82. Overcoming this level could trigger an acceleration to the upside.

If $52.68 fails as support then sellers are likely to make a run at the $50.89 low and the $50.33 main bottom. If the main bottom fails then look for an acceleration to the downside.