Get An Unfair Advantage In Energy Markets 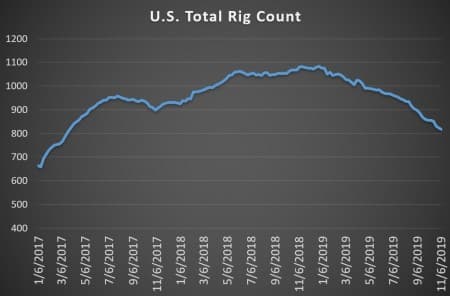 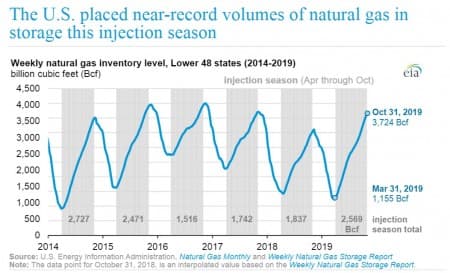 – Natural gas inventories have surged this year, rising from a low point of 1,155 billion cubic feet (Bcf) in April to 3,724 Bcf at the end of October.

– Natural gas stocks are now 37 Bcf above the five-year average.

– The U.S. is entering the winter season with ample supplies, which has weighed on natural gas prices and puts somewhat of a cap on any rally. Gas drillers are struggling financially as a result.

– Occidental Petroleum (NYSE: OXY) is looking to sell oil and gas assets in Wyoming and Colorado, assets that were acquired when the company bought Anadarko Petroleum.

– TC Energy’s (NYSE: TRP) Keystone pipeline was partially returned to service after a major spill in North Dakota late last month. It will operate the pipeline at reduced pressure.

Oil continues to seesaw on every rumor (positive or negative) regarding the U.S.-China trade war. As a result, a lot of attention will be paid to President Trump’s speech today at the New York Economic Club, where he may provide more clues into what to expect next. Markets are betting on an easing of tariffs.

READ ALSO  After Merging, Goldman Sachs BDC Is Expected To Trade At A 20% Discount To Historical NAV (NYSE:GSBD)

Shell and others stop oil exploration in Bolivia. Bolivian President Evo Morales stepped down (or was ousted in a coup, depending on one’s point of view), and is seeking exile in Mexico. The political turmoil could descend into deeper violence. Royal Dutch Shell (NYSE: RDS.A), Total SA (NYSE: TOT), and Respol (BME: REP) “have all stopped or severely limited drilling on exploration wells,” Bloomberg reported. There isn’t evidence that existing production has been affected, but new drilling has been suspended for now. Related: Aramco’s Breakeven Costs Are The Lowest In The World

Natural gas prices sink on weather forecast. A warmer-than-expected weather forecast for the U.S. winter from the National Oceanic and Atmospheric Administration led to a selloff in U.S. natural gas prices. As a result, share prices of major shale gas producers fell sharply. EQT (NYSE: EQT), the largest gas producer in the U.S., saw its share price plunge by 9 percent on Monday. The forecast comes even as freezing temperatures have swept over much of the continent. Low prices are hitting the entire gas sector hard.

Iran announces major oil discovery. Iran said that it has discovered a giant oil field in the country’s south, a field that may hold as much as 50 billion barrels of oil. That is almost as big as all of the reserves held in the U.S., which stands at around 61 billion barrels.

Aramco releases prospectus. Saudi Aramco released a highly-anticipated prospectus ahead of its IPO. In the document, the company acknowledged several risks to its business, including an admission that “terrorism and armed conflict may materially and adversely affect” its operations. The company also acknowledged the threat of peak oil demand. Aramco did not reveal the percentage of the company that it plans on offering at the IPO in December.

Frac sand miners squeezed by drilling slowdown. Frac sand supplier Carbo Ceramics (NYSE: CRR) issued a “going concern” warning on Friday, admitting that it may not be able to survive the shale drilling slowdown. On Monday, the company’s share price plunged by almost 48 percent. While shale drillers cut drilling to reduce expenses, all of the ancillary services related to fracking are bearing the brunt. “If you look at Permian frack sand prices, we estimate they are down about 80% from the peak,” Joseph Triepke, president of consultancy Infill Thinking, told Reuters.

Cyber-attack his Pemex. A cyber-attack hit Pemex computer servers that halted administrative work at the company on Monday. Related: Why One Analyst Thinks Tesla’s Stock Could Soar To $400

Sunpower splits into two companies. SunPower (NASDAQ: SPWR) announced plans to split into two, with one company focused on the U.S. distributed solar market, and another focused on overseas PV manufacturing. China’s Tianjin Zhonghuan Semiconductor will invest nearly $300 million in the manufacturing company.

Total CEO never believed in shale. Total SA (NYSE: TOT) CEO Patrick Pouyanne said he his company stayed away from shale, and that he “never believed in flexible short-term capex,” he said, adding that “it’s not true.” He said that companies in shale have to commit a “quite heavy” capex program, and despite the gold rush mentality, profits have been elusive. Total, on the other hand, is focusing on LNG and deepwater.

Goldman: Shale’s struggles are bullish. Goldman Sachs is out with a note arguing that “what’s bad for the micro is good for the macro,” meaning that the individual struggles by an array of shale companies will translate into slower production growth, which will sow the seeds of an oil price rally in a year or two. After third-quarter earnings, the investment bank said that it’s clear that capital is becoming scarce, discipline from companies is apparent, and productivity data is mixed. Goldman reiterated Buy ratings for EOG Resources (NYSE: EOG), Pioneer Natural Resources (NYSE: PXD) and ConocoPhillips (NYSE: COP), and Sell ratings for Chesapeake Energy (NYSE: CHK) and Southwestern Energy (NYSE: SWN).

Argentina’s Vaca Muerta at risk. Oil companies in Argentina are nervous that an economic crisis could kill off the recent surge in Vaca Muerta production. Drilling activity has fallen by half since the August primary, which sparked a selloff in the currency and forced the government to freeze fuel prices. The price freeze meant that companies were selling oil at a loss, so they all but halted drilling. The price freeze is set to expire within days, although it’s unclear what the new incoming president will do.

Previous PostThe Political Colour of Fiscal Responsibility: Trump’s Fiscal Policy as a Republican TraditionNext PostThe Many Ways Sanders and Warren Are Different & Why It Matters