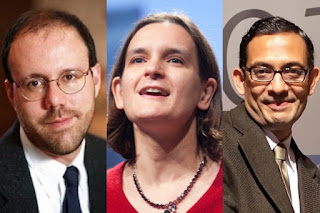 From the Nobel committee:

Despite recent dramatic improvements, one of humanity’s most urgent issues is the reduction of global poverty, in all its forms. More than 700 million people still subsist on extremely low incomes. Every year, around five million children under the age of five still die of diseases that could often have been prevented or cured with inexpensive treatments. Half of the world’s children still leave school without basic literacy and numeracy skills.

This year’s Laureates have introduced a new approach to obtaining reliable answers about the best ways to fight global poverty. In brief, it involves dividing this issue into smaller, more manageable, questions – for example, the most effective interventions for improving educational outcomes or child health. They have shown that these smaller, more precise, questions are often best answered via carefully designed experiments among the people who are most affected.

In fact, these laureates are government technocrats who think at the government level rather than at the foundational level where an appreciation for free markets would make their work useless.

As a direct result of one of their studies, more than five million Indian children have benefitted from effective programmes of remedial tutoring in schools. Another example is the heavy subsidies for preventive healthcare that have been introduced in many countries.

One has to ask, do these three seriously believe they have the answer for five million Indian children rather than leaving things up to the free market where multiple options would develop (without political interference)?

And political interference is not a theoretical question.

Alex Tabarrok reports on one type of interference (one of potentially many kinds):

[W]hen they tried to institute a similar program for nurses in Putting a Band-Aid on A Corpse the program was soon undermined by local politicians and “Eighteen months after its inception, the program had become completely ineffective.”

And government subsidies for preventive healthcare? That is the government, deciding what is proper preventative healthcare, is taken seriously. In other words, the vegans, ketos and paleos get to battle it out to see who gets influence over health policies rather than leaving options?

How confused are these three?

Naturally, they are concerned with politically correct questions.

Duflo and Banerjee have conducted many of their field experiments in India and have looked at not just conventional questions of development economics but also at politics. In 1993, India introduced a constitutional rule that said that each state had to reserve a third of all positions as chair of village councils for women. In a series of papers, Duflo studies this natural experiment which involved randomization of villages with women chairs. In Women as Policy Makers (with Chattopadhyay) she finds that female politicians change the allocation of resources towards infrastructure of relevance to women. In Powerful Women (Beaman et al.) she finds that having once had a female village leader increases the prospects of future female leaders, i.e. exposure reduces bias.

Then there are just silly, poorly constructed models.

Before Banerjee became a randomistas he was a theorist. His A Simple Model of Herd Behavior is also a favorite. The essence of the model can be explained in a simple example (from the paper). Suppose there are two restaurants A and B. The prior probability is that A is slightly more likely to a better restaurant than B but in fact B is the better restaurant. People arrive at the restaurant in sequence and as they do they get a signal of which restaurant is better and they also see what choice the person in front of them made. Suppose the first person in line gets a signal that the better restaurant is A (contrary to fact). They choose A. The second person then gets a signal that the better restaurant is B. The second person in line also sees that the first person chose A so they now know one signal is for A and one for B and the prior is A so the weight of the evidence is for A and the second person also chooses restaurant A. The next person in line also gets the B signal but for the same reasons they choose A. In fact, everyone chooses A even if 99 out of 100 signals are B. We get a herd. The sequential information structure means that the information is wasted. Thus, how information is distributed can make a huge difference to what happens.

Does Banerjee seriously think that restaurants are just signal takers subject to the herd? That they will do nothing to signal the benefits of their restaurants? This model has nothing to do with reality.

The Prize awarded for this silly work is 9 million Swedish krona ($916,000), to be shared equally between the three.

Previous PostSyrienkrigere skal selvfølgelig ikke til DanmarkNext PostPeter Schiff: Trump and the Fed Are Reading Off the Same Script