The ‘New’ Modern Corporation: The Battle For The Future

One reader of my last post asked me the question:

“Your recent articles no longer mention the “new” modern corporation?”

“Without it, your articles are just not the same anymore!”

Let me try to bring all of this together.

Moving in this direction, we are moving to a world constructed of platforms or networks, built exhibiting zero- or close-to-zero marginal costs. This structure is subject to enormous economies of scale. And, this “new” Modern Corporation can generate lots and lots of cash, which also allows it to engage in a substantial amount of financial engineering. Debt is not needed.

The world was moving into the information-based world and most agreed that it was only a matter of time before the transition became complete.

China On The Horizon

One looming factor cannot not be kept out of this picture and that is the presence of China as a competitor to dominate the future information-based world. China still has a ways to go, but most analysts believe that the future is going to be dominated by the pressure that China brings to the United States is terms of controlling the technological future.

Innovation in this space will dominate the drive of China and the United States this century.

And Then the Coronavirus Pandemic Hit

As if there was not enough going on in this transitioning world, the COVID-19 pandemic came upon us and almost everything changed.

But, most of all, the pandemic crisis has resulted in us moving even faster into the future. This is not an abnormality. Historically, major plagues and pandemics result in tremendous transitions taking place, in many respects bringing on the future at a faster pace than could be imagined.

This pandemic is having a similar impact on the current age. And, the world is restructuring right before our very eyes. The downside has to do with what we are seeing happening to current “legacy” companies like Hertz (NYSE:HTZ), J.C. Penney (OTCPK:JCPNQ), and Neiman Marcus (NMG) and J. Crew. These are just a part of what it happening to the “old” world structure.

But, there is the new. I have written several articles on this, but let me bring some others into this discussion. For example, Michael Mackenzie writes in the Financial Times that…

“…disruptive companies in cloud services, digital payments and bioprocessing should play a crucial role in stock selection over the next decade. And focusing on a G2 world of China and the US may be one key takeaway from the great recession of 2020.”

That is the future lies with Big Tech and the competition between China and the US. The stock market is talking to us about this.

On the other hand, relating to the discussion on “legacy” firms,

“The laggards include energy, financials, retailers, transports and industrials — along with real estate companies that face slews of missed rental and mortgage payments. The pandemic shock has only enhanced the leadership of technology and healthcare over the past two to three years, leaving other sectors trailing further behind.”

Mr. Mackenzie presents the following chart to support this statement.

READ ALSO  Welcome To The Corruptocracy 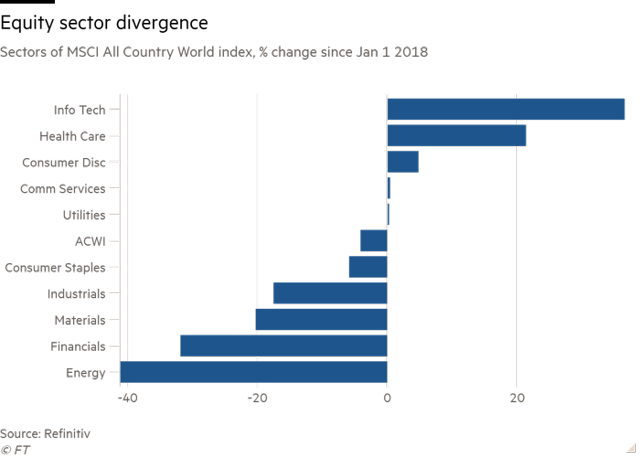 “Big Tech’s biggest advantage — business models which convert cash into innovation, market share and an ever-larger lead over their competitors — is accelerating, thanks to the pandemic.”

“The tech giants that are thriving aren’t merely doing it by acquiring competitors and dominating markets. Like some monopolists of ages past, these companies spend heavily on research and development.”

These are the representatives of the “new” Modern Corporation.

I have written many articles on how the “old” corporations need to move toward becoming “new.” For example, take a look here and another look here. According to the first part of this article, the pandemic is accelerating the change from the “old” to the “new.” I will continue to follow this.

Most analysts reviewing the situation, either looking at the “legacy” companies or the “new” Modern Corporations, conclude that investors are going to have to change the way they look at the situation. The world was changing, causing changes in how investors were looking at things, and now, after the pandemic hit, the world is even changing more and changing more rapidly. Investors must understand this and adapt their investment strategies to the new environment.

An interesting outcome of such a move would be that corporations would use a lot less debt to finance their operations. Large amounts of physical capital requires a large amount of corporate debt. If corporations become more and more dependent upon intellectual capital, there will be less need for a corporation to rely upon oppressive amounts of financial leverage. This, to my way of thinking, would not be such a bad outcome.

And, then we cannot forget China. Competition is going to be fierce. The “new” Modern Corporation is needed to compete. The United State must be ready!

The final point is that we are going to see a lot of changes taking place. We need to keep loose and prepared, so that we can move with the changes and not have to battle them.

Previous PostAston Martin chief to leave, Mercedes-AMG CEO to replace him: sourceNext PostCompanies line up to sell stock as US IPO market reopens