The Natural Gas Nation Every Exporter Is Targeting

Germany’s economy is the biggest and most dynamic in Europe and its gas demand makes it Gazprom’s largest customer in terms of natural gas imports. The country’s gas consumption is projected to increase even further in the coming years due, in large part, to its energy policies and the rising costs of carbon certificates. Although renewable energy is the main focus of German policy makers, the technical limitations of wind and solar power production have created significant room for natural gas.

Intermittency remains the major impediment to large-scale implementation of solar PVs and wind turbines. Until large volumes of electricity can be stored for extended periods of time for a reasonable price, another source is required to balance the grid on cloudy and windless days. Natural gas could be that fuel as it emits as much as 55 percent less carbon dioxide than coal and has a high-energetic value which makes it complementary to renewables. 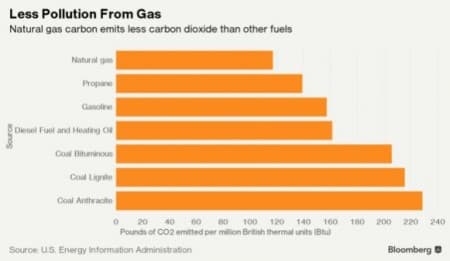 Germany was already an important buyer of natural gas on the international market, but the construction of Nord Stream 2 (NS2) and at least two new gasification plants for LNG will cement its position as a vital importer. With that in mind, the relatively high prices of carbon certificates on the EU’s Emissions Trading System (ETS) are going to become increasingly important.

German politicians have decided to phase-out coal-fired power plants by 2038, while the disaster at Fukushima in Japan has negatively affected German public opinion towards nuclear energy. Berlin, therefore, has decided to shut down its nuclear power reactors by 2022. These measures will eliminate about half of the country’s power generation capacity. To make matters even worse, certain aspects of the German energy transition face ‘headwinds’ such as the expansion of onshore wind. Natural gas is regarded as a ‘bridging fuel’ in this situation. Related: How Much Energy Do Americans Use On Thanksgiving?

Currently, the emission of one ton of CO2 in Europe costs €24, which is 20 percent higher than a year ago. Analysts don’t expect significant changes through to the mid-2020s. Renewables stand to benefit the most from this as they don’t emit any carbon at all. The increasing prices of carbon certificates on ETS, however, rattles the merit order where the competitiveness of a power plant previously was dominated by its efficiency and the price of raw materials (coal, gas, and petroleum products). The rising costs of carbon certificates obviously favors natural gas over pollutant fuels such as coal.

Therefore, German utilities suddenly have an opportunity to restart previously mothballed gas-fired power plants. Uniper, for example, plans to restart 3.5 GW of capacity. According to Uniper’s CEO Andreas Schierenbeck, “the carbon markets have shown they work. This summer, carbon prices were very high and gas very cheap, very competitive. The logic is clear: you need double as much carbon certificates for coal than for gas.” 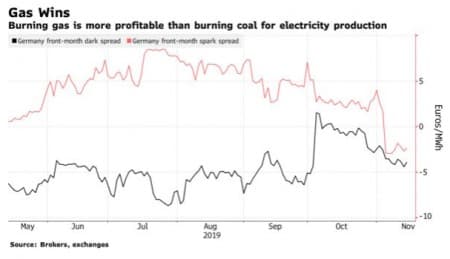 Germany imports 85 bcm of natural gas annually, making it the world’s third-largest importer after China and Japan. A significant part of those imports have traditionally originated from within the EU. However, the depletion of gas fields in the North Sea and the Netherlands’ decision to shut down Europe’s largest single gas field by 2022 have dramatically impacted Berlin’s import options.

Therefore, the importance of foreign producers in supplementing the falling production of traditional European suppliers is growing. NS2 is one of the alternatives. The controversial pipeline will add approximately 55 bcm of capacity to import Russian gas. However, other exporters such as North American shale gas producers will most likely also benefit from Germany’s growing demand.

In a rare sign of bipartisan support, Democrats and Republicans in the U.S. Congress are attempting to block the completion of NS2. The intended bill would impose sanctions on any company working on the pipeline. European firms Allseas and Saipem would be forced to cease activities, which would effectively kill the project despite it almost being completed. Related: Global LNG Markets Are Circling The Drain

However, it remains uncertain whether Washington’s aggressive and unilateral actions are necessary for what the Americans call ‘the protection of European energy security’. European partners of Gazprom maintain their support for NS2 while Berlin views Russian gas as essential due to the phasing-out of nuclear and coal plants. Siberian gas is relatively cheap and easier to transport compared to LNG. 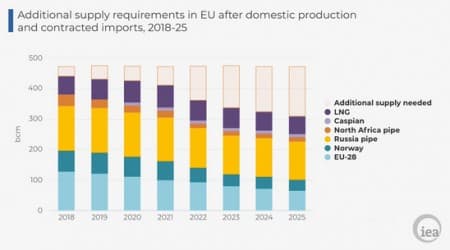 The growing demand for natural gas in Europe and the depletion of domestic reserves strengthens the continent’s importance for exporters. Piped natural gas is essential for the EU due to Gazprom’s capacity to export exceptionally high volumes. The existence of LNG capacity, however, adds flexibility to the market and fixes a price ceiling which has essentially lowered prices in Europe. The significant gap between demand and available production provides the necessary room for both Gazprom and American LNG exporters on the European market.