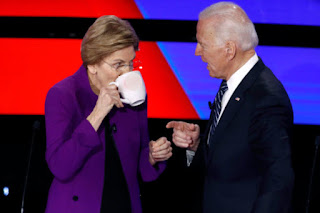 Elizabeth Warren wants to be Joe Biden’s Treasury secretary and will make her case for it if he wins next week, according to three Democratic officials who have spoken with her inner circle, reports Politico.

Warren’s moves could set up the marquee fight between the party’s left and its center over what will be one of the most consequential Cabinet roles in the next administration.

Warren is an anti-capitalist, major league interventionist. If she ends up running Treasury, she will attempt to put roadblocks in the way of capital flows and business in every manner she can.

It must be understood that both the World Economic Forum and the Council on Foreign Relations are pushing for the Big Reset after the COVID lockdowns. This will be horrific enough under any conditions but the last thing you want is Warren having official input on the Reset. The globe would end up looking like some form of a Mussolini economic environment.

Warren wants the power to make such changes.

Warren allies say that the job is appealing because it is a once-in-a lifetime opportunity to enact some of the “big structural change” she talked about during the presidential primary, rather than just pressuring Cabinet officials from her Senate perch. Much of her life’s work has revolved around the intricate rules and levers of power in the executive branch.

Think of Warren as Bernie Sanders with more testosterone.

The only positive is that Biden is bought and paid for by a good chunk of Wall Street and they don’t want Warren in any position of power. That Biden is a crony may be the best hope that one of the other names bandied about for Treasury might be selected.

They don’t have much going for them other than they are not Warren but that is a lot.