The Militarization Of Libya’s Oil Infrastructure

For the second time in less than 45 days, the National Oil Corporation (NOC) of Libya in Tripoli has condemned the militarization of the country’s energy infrastructure by General Haftar and his forces. Of particular concern is the military presence inside the Ras Lanuf oil terminal in central Libya. Our sources inside the NOC say that Haftar’s forces have stormed this terminal and seized one building to house some 80 military officers. They have also attempted to provide a warship with fuel and have seized food stores and housing units for employees at the terminal.

With the NOC chairman, Mustafa Sanallah, calling this act a major threat to the country’s oil infrastructure, he has also indicated that he may withdraw employees if he feels they are in danger. Withdrawing them would effectively hand the terminal over to Haftar without a fight.

That means that Haftar would completely control one of the largest terminals on the shores of the southern Mediterranean, with a storage capacity of 6.5 million barrels of oil.

In the meantime, we have witnessed the first attack on a foreign oil asset in this conflict, with a JV between Eni and the Libya NOC damaged in an air strike on Tuesday that wounded three workers. The airstrike, launched by Haftar’s forces, damaged a storehouse belonging to the JV, Mellitah Oil & Gas. Equipment and warehouse materials were destroyed in the airstrike. 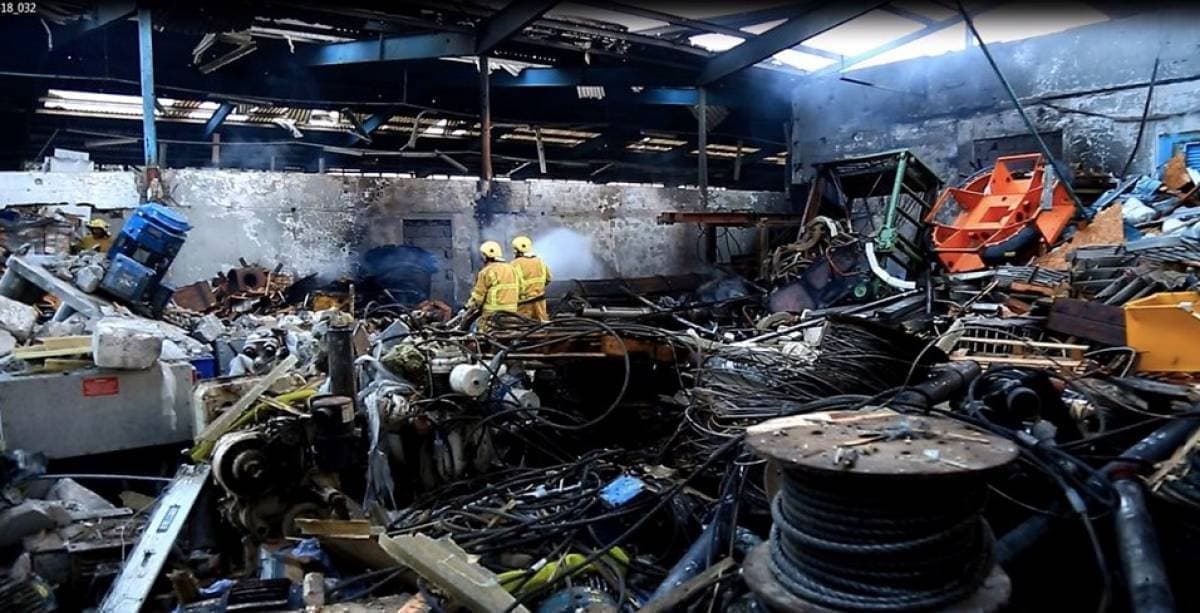 The warehouse was in the east Tripoli area of Tajoura and the airstrikes are in response to the Libyan Air Force strikes against Haftar’s weapons and ammo stored in an area south of Tripoli. The Government of National Accord (GNA) strikes on this target were in response to Haftar’s claims that it had received a Russian defense system, via the UAE, to protect supplies in this area.

The head of the GNA government, PM Fayez al-Sarraj, is now proposing elections this year to end the conflict. Given the carnage and destruction of Haftar’s assault on Tripoli, Sarraj is now convinced of an electoral victory. This, however, will not happen. Haftar will not allow elections at this point and will absolutely not sit down at the table with Sarraj.

There is still no definitive evidence that Iran was behind the tanker attacks in the Gulf of Oman, but this conflict has taken on a life of its own and now we are dangerously near an all-out regional war from which there will be no end-game beneficiaries.

Iran has been backed into a corner and is now reminding the world that its ballistic missiles can take out an aircraft carrier. And Iraq will fall to war first. No further indication is needed than a rocket striking the residential and operations headquarters of oil majors in Basra early on Wednesday, with no claims of responsibility but immediately after Trump announced he would send another 1,000 troops to the Middle East. In the meantime, Washington’s tactics concerning Iran appear to be continually wavering, suggesting that there is no actual policy in place. Late on Tuesday, right after announcing the 1,000-troop deployment, Trump referred to the tanker attacks as “very minor”.

What investors need to know right now is that conflict has been provoked to a point where no single actor is in control. That makes for a very dangerous and uncertain future, especially with the nature of today’s asymmetrical warfare. In attempting to use the conflict with Iran as a 2020 campaign booster, Trump has allowed this to go too far, and appears to be easily swayed by warmongers in his inner circle who were far too quick to put out video footage claiming to be evidence that Iran was behind last week’s tanker attacks, despite the fact that the owners of the vessels in question have definitively refuted this. The US Navy also came out on Wednesday with a statement saying that “mine fragments” “resembled” Iranian mines, which is again not in the realm of conclusive evidence. This is not intelligence; rather, it is propaganda. It does not, however, matter whether it is one or the other at this point.

The Saudi Crown Prince, MBS, whom we have mentioned as the wild card here, is being tempered by Saudi King Salmon, who has publicly declared that the Kingdom does not seek an all-out war with Iran. The UAE, whose royal circle essentially created MBS, is also keen to keep things from escalating and so has not yet outright blamed Iran for the tanker attacks. From that perspective, it is interesting to follow the UAE media, which is calling for calm and restraint (and does so only with royal approval). All are now worried that this may have gone too far to turn back.

For the UAE, it is notable that two of the emirates are particularly impacted: Dubai and Abu Dhabi. Dubai is a major hub for Iranian business, accounting for almost all of the nearly $17 billion in non-oil trade with Iran last year. Sanctions have forced quite a few Iranian firms out of Dubai, and because Abu Dhabi has been one of the key lobbying forces for these sanctions in Washington, Dubai holds it responsible for provoking the situation to the edge of a dangerous conflict. The beneficiaries of all of this have been Qatar first and foremost, but also Oman and Turkey. Ironically, Qatar is under an economic blockade from the Saudis and the UAE, so it seems that all of these plans are backfiring now.

Egypt is also in a precarious position here. While is it expressing support for Saudi Arabia and the UAE – both of whom are its allies in the region – its media is also addressing the issue of Israel, which had the capabilities and motive for staging the tanker attacks in the Gulf of Oman. Egypt has been careful not to explicitly denounce Iran over these attacks. Egypt has also withdrawn from “Arab NATO” – an alliance that was created specifically to confront influence. Some pro-regime media have alluded to the possibility that the tanker incident was perpetrated by the Israeli intelligence apparatus, while others suspected the US had a hand it in as well.

In the meantime, this regional conflict is most notably being played out with Yemen’s Iran-backed Houthis who have now threatened to attack oil sites and tankers in the Red Sea and the Arabian Sea.

The Caribbean Court of Justice (CCJ), after a weeks-long delay, has upheld a no-confidence vote against the ruling government of Guyana, which in theory means that new elections must take place within 90 days. Guyana’s current president, Granger, now says that elections will be held in late November. This is the election date Granger was initially targeting. We see no major upset here for Exxon, as both sides in what is essentially an ethnic-political battle hope to see first production move forward without delay. What they are really trying to do is ensure that their party is the one that ends up controlling the oil revenues, which means controlling parliament.

– Both Greece and Cyprus are planning to push for EU sanctions against Turkey if it is proven that it has indeed started exploratory drilling for natural gas offshore Cyprus, in the Cypriot EEZ. The Greek PM made the announcement this week, clearly hoping that the vague threat of sanctions will push Erdogan to withdraw from his provocative drilling campaign. Cyprus had threatened to block any new membership bids for the EU if Brussels failed to take decisive action against Turkey. Turkey is digging in deeper here, however, announcing plans to deploy a second drilling ship to the area to begin operations in July. Politically, Erdogan would not likely survive sanctions, which are also threatening to come from the U.S. (despite the fact that they are NATO allies) over Russian weapons purchases.

Despite the vastly escalated tensions with Iran, Washington has – very quietly – granted Iraq another waiver to import energy from Iran. This is not to be taken lightly. The waiver allows Iraq to continue importing electricity from Iran. This is another 90-day extension for Iraq. The thought here is that Washington will keep extending this waiver because Iraq really has no alternative to the 1.5-billion standard cubic feet per day of Iranian gas it needs to run its power stations. Not extending the waiver would result in massive unrest in Iraq, which would only play into the hands of the Iranian powers there. While Washington is pressuring Iraq to build the infrastructure it needs to forego Iranian gas, this isn’t going to happen any time in the near or medium-term future. Barring an all-out war with Iran, the waiver is likely to continue being extended. This is a good barometer to watch: The US would have to be very desperate to cancel this waiver because doing so would itself launch a war in the region.

– Petrobras has announced a large discovery in Sergipe basin, where six fields are estimated to hold 20 million cubic meters of natural gas per day. Discovery is expected to generate $1.8 billion in annual revenue for the company.

– Reabold Resources claims to have potentially discovered the largest onshore gas field in the UK, at West Newton in northeast England, estimating that it could contain at least 189 billion cubic feet of natural gas.

– Japan’s Inpex Corp. has agreed on a framework with Indonesia for the Abadi liquefied natural gas project in the Masela block. Field development and the planned LNG export project will cost an estimated $18 billion to $20 billion. Inpex signed an agreement with the Indonesian government in 1998 to develop the offshore Masela block in the Abadi gas field. The Japanese company has a 65% stake. Shell owns the rest.

– Anadarko has greenlit construction of a $20-billion gas liquefaction and export terminal in Mozambique, the largest single LNG project approved in Africa. The facility will have two LNG trains with a total nameplate capacity of 12.88 million tonnes/year. The gas will come from the Golfinho-Atum field in Offshore Area 1 where Anadarko and its partners have discovered 75 trillion cubic feet of recoverable natural gas resources.

– Despite the ongoing conflict with Iran and Israel’s role in this, Qatar (on the wrong side of this conflict and under economic blockade by a Saudi-UAE coalition) has held talks with the Israelis on providing technical expertise and funding for a proposed power line between Israel and the Gaza Strip to aid the Palestinians.