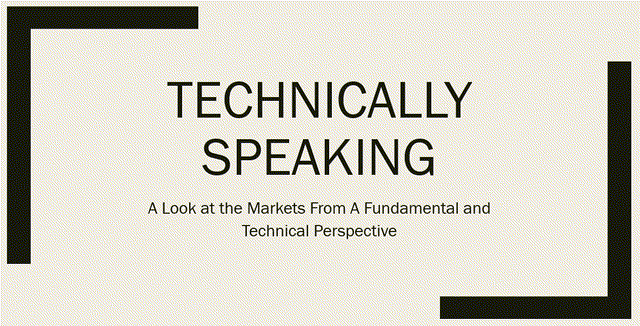 The first section of my Friday market column uses the economic analysis methodology developed by Arthur Burns and Geoffrey Moore, which classifies indicators into long-leading, leading, and coincidental. The purpose is to determine the current economic trajectory of the US economy. The second section looks at the macro-indexes using widely used and traded ETFs. This analysis helps to inform my ETF recommendations.

Currently, the US is in a recession. When looking at the economic numbers, we’re looking for “green shoots” of economic activity that indicate growth is likely to occur.

The Fed’s efforts to calm the credit markets have been successful.

BBB yields (left chart) spiked in March as the credit markets seized. Yields have returned to low levels, lowering the cost of credit. The Fed is also pumping money into the economy (right chart) at an unprecedented rate.

As a result, businesses will be less inclined to hire and add new capital, which will lower demand.

Leading indicators conclusion: The Fed has “set the table” for economic growth, lowering credit market stress, and creating as much money as possible. This hasn’t yet translated into better hard data.

Here, most of the hard data is bearish. 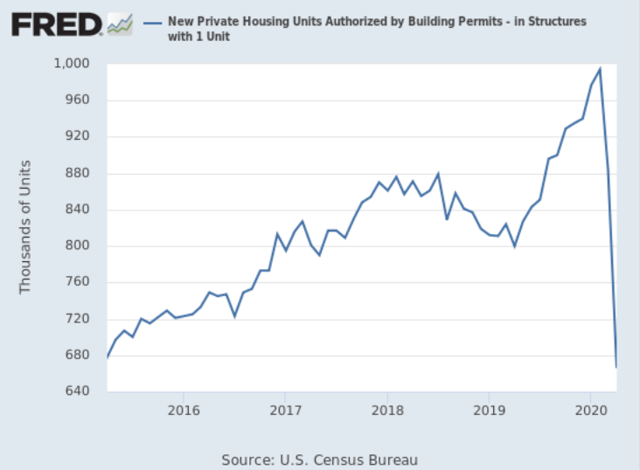 The financial markets, however, are providing a few “green shoots.”

The yield curve has “un-inverted” …

… while the stock market has rallied strongly from its bottom.

Coincidental data conclusion: again, the financial table has been set: credit is cheap, the credit markets are working, and the stock market has rallied. However, harder data is still very negative. This shouldn’t be surprising, however, since the recession is still very new.

Here, the data is horrible:

The above chart converts real retail sales (in red) and industrial production (in blue) to base 100 numbers and uses the end of the last recession (6/09) as 100. In the latest report for each number, both dropped sharply.

The jobs market has wiped out most of its gains that occurred during the last expansion. While the latest jobs report was a welcome turnaround, it barely made a dent in the overall situation.

Coincidental data conclusion: the data indicates the economy is still in a deep recession. Ideally, the large amount of government stimulus will lead to a quick turnaround.

Overall economic conclusion: the good news is that policymakers have taken this threat very seriously and have passed large stimulus measures. While the data hasn’t responded yet, that shouldn’t be surprising; the recession is still very new.

The equity markets dropped pretty sharply this week. The IWMs and IJHs lost nearly 8%; larger-cap indexes were also lower. The entire Treasury market curve rallied this week; the long end of the curve was up slightly more than 4%.

All sectors were lower. At the bottom of the table are ETFs that have done well in the last few weeks. Energy has been strong thanks to a recovering oil market; financials have benefited from a widening yield curve; industrials have also caught a bid as traders bet on a quick economic recovery. At the top are the pandemic beneficiaries of technology and communication services.

At the end of last week, the markets had taken a risk-on stance. Treasuries had finally moved through support; equities were in a strong rally stance. This week, the markets are on a knife edge; Treasuries have rallied again and are now above old levels of resistance/support while equity ETFs are right on trend lines with MACDs giving sell signals.

Let’s start with the Treasury markets.

Above are 6-month charts of the main Treasury market ETFs. Last week, all had broken support, adding fuel to the bull’s argument for a quick recovery. Now, they’re rallied and are again above key levels. So, once again, the fixed income market is projecting weak economic growth, which is at odds with the bullishness of the equity indexes.

Meanwhile, the equity markets are now hanging on a knife edge. 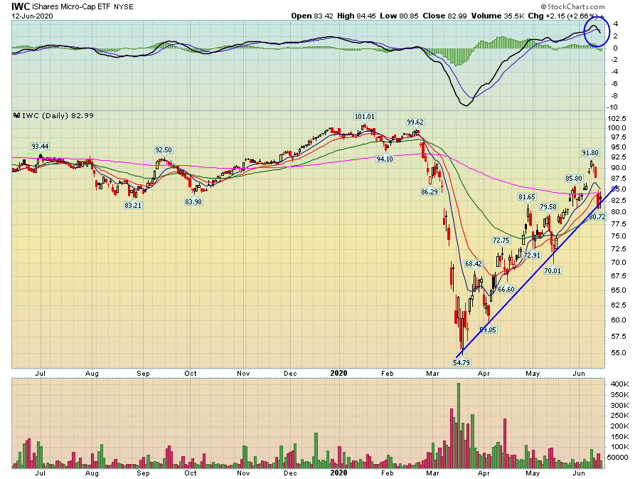 Micro-caps are right at support with a sell signal from its MACD. 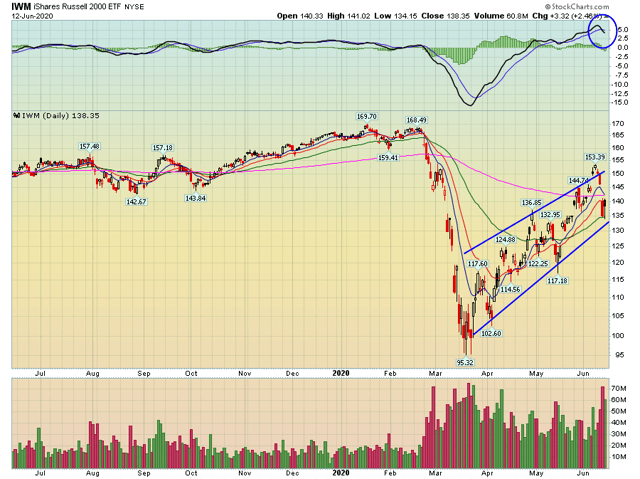 Small-caps’ MACD has also given a sell signal but prices are still in an upward sloping channel. 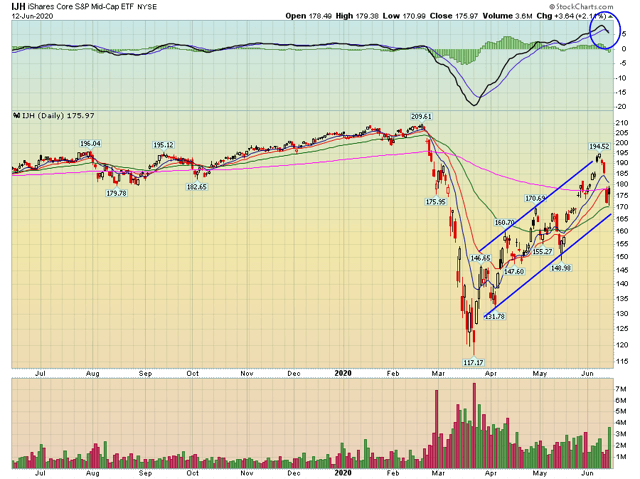 Mid-caps are similar to small-caps; prices are in an upward sloping channel. But, again, the MACD has given a sell signal. 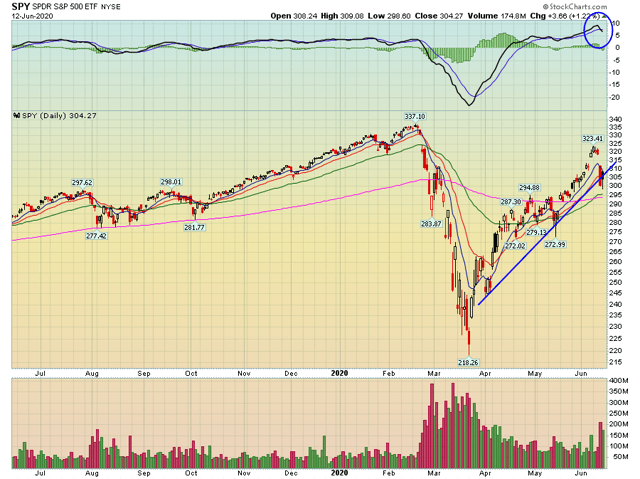 The SPY chart is right at support with a sell signal from its MACD.

So, we end the week on edge. The Treasury market says the economy will be weak for some time, buying into the Fed’s latest economic projections. The equity market had been arguing that the recession would be short, believing the large amount of federal spending would cushion the blow. Now it’s wavering in that assessment.

We have a few days to ponder these developments.

Have a good weekend.