The Market Has Punished Aquestive Therapeutics – But Large Opportunities May Exist At Current Trading (NASDAQ:AQST)

Home Financial news The Market Has Punished Aquestive Therapeutics – But Large Opportunities May Exist At Current Trading (NASDAQ:AQST)
2020-10-122020-10-12By finanz.dk

After a recent run-up since July to a high of $9.09 in mid-September, the market has punished Aquestive Therapeutics (AQST) with a -46.86% change to the downside in around 2 weeks to today’s trading of $4.74. The notable cause is cited as the FDA’s rejection of AQST’s marketing application for their Libervant Buccal Film (LBF), the compound of which claims its effectiveness in the management of seizure clusters. The issue, reported by the FDA, was that certain weight groups incorporated within the study filed with the LBF application did not show the pharmacokinetic responses intended with the indicated therapeutic dosages outlined. Therefore, the application was rejected, which resulted in a large selloff from September 25th until September 30th on enormous total volume of 29,225,943 shares over these 5 days. Shares rebounded very slightly by October, and RSI indicators suggested that at current levels the stock may be oversold and has the potential for momentum to change back to the upside. 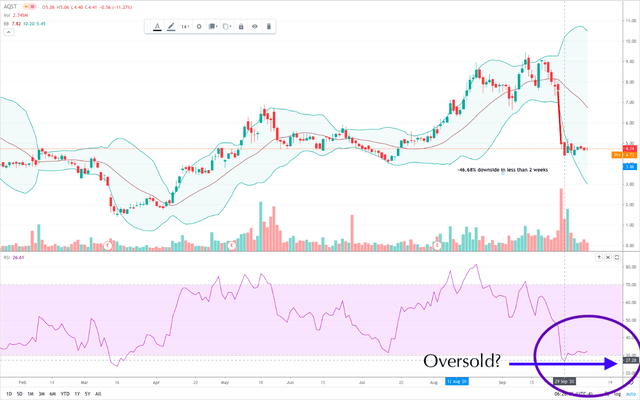 Looking at the charts, we have been in this similar situation 3 times over the past year with AQST, each with a favourable rebound back towards the $6-$8+ range from previous lows. Furthermore, the last 3 times in which prices approached and/or breached the RSI 30 line, large run-ups occurred where shorter-term investors who took profits early benefited greatly. To illustrate, the low as of 21st October, 2019, saw a 176.97% increase to a high of $8.78 by December 2019; in March this year, we reached a post-selloff low of $1.54 before the bulls gained confidence and drove trading to a 247% increase to $6.82 in May; and as recently as July, after a bearish sentiment where investors saw a quarterly low of $4.17, AQST bounced back in a 106.95% increase to $8.63 in mid-September.

Markets have a tendency to overreact to both good and not-so-good news, and empirical evidence is sound in supporting this notion. It could be argued that we have seen evidence of this most recently here with AQST. What is certainly interesting is that each display of support at the levels described earlier has shown similar speed and direction to recovery. Considering the market reaction to the recent news and historical market activity with AQST, significant upside potential exists, which presents an exciting opportunity should the market also see the upside in its growth prospects, and speculators allocate capital towards AQST equities in the hope of entering at a favourable price, for a company that has promising fundamental momentum. Therefore, therein lies a higher-risk play, but with potential compensation matching the exposure to the downside, should circumstances prevail. 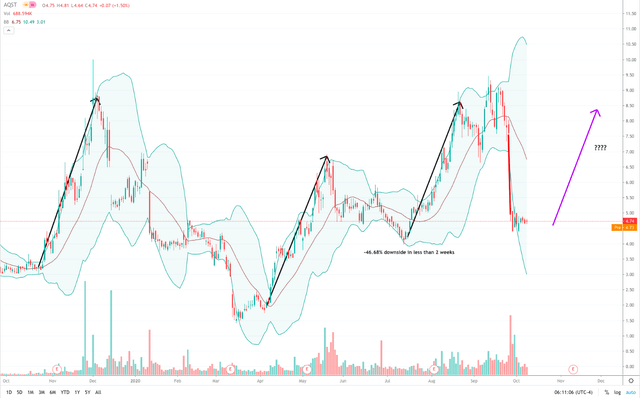 We have previously covered AQST following a strong Q2 exit and found that mid- to long term, the company is in possession of favourable fundamental signals that may verify the investment thesis, should the market agree. For instance, total revenues grew 144% from Q1-Q2 and showed a YoY change of 95% from Q2 2019, whilst gross profit hailed in at a 217% YoY increase on solid margins of 57.90%, to reach a TTM figure of $40.6 million. EBITDA also showed significant growth into profitability for the period, which resulted in a quarterly total of $2.9 million. Key drivers for the change included licensing fees and royalty carryover from the Kynmobi compound, alongside Sympazan sales, which saw 60% YoY growth in sales to the Q2 exit. Kynmobi is an interesting compound, with decent efficacy and indication in the use for Parkinson’s symptomology, as a dopamine agonist that is indicated to manage and potentially alleviate the motor-related components related to Pakinson’s disease.

Company guidance has indicated around $35-45 million in revenue totals for the remainder of the year, which will alleviate margin pressure and allow for potential expansion of gross margins to 70-75%, or $31 million gross in the blue-sky scenario. We believe that this figure is consistent based on our analysis, and in our blue-sky picture, revenues may be slightly higher than $45 million. On this basis, cash burn is estimated at around $9-10 million each month to the end of FY 2020, surmounting to around $50 million in the grey-sky scenario, thus impacting EBITDA and resulting in an annual EBITDA loss of ~$50 million. The outlook seems positive from our analysis, however, which the general consensus is confirming, where we see revenue growth at a CAGR of approximately 58-74% to the end of FY 2025, or around $250-270 million by this period. Running a linear regression approximation over the consensus of analyst estimates yields similar results.

On these revenues, we see FCF growth as slow and only reaching profitability by midway of 2023 at current trajectory, a revision from our previous analysis, and negative FCF margin until this 2023 period. By 2025, we have revised FCF projections to reach around $105-110 million in our upside case. We’ve observed relatively positive correlation between OCF and FCF over the periods to date, and from our modelling, foresee the same to occur until 2025, albeit for FY2021, where we firmly believe this recent FDA rejection will impact cash from operations, and the margin as a percentage of FCF will only reach ~87% of total FCF for this period, whereas historically, it has remained around 100% of FCF to date.

There is significant upside based on our blue-sky DCF analysis, a snapshot of which can be observed below. As usual, we are accustomed to assigning a terminal growth rate related to the PRAT model of DuPont, alongside the sum of the opportunity cost from holding a current risk-less asset and the historical S&P 500 total return. We have revised this valuation based on more recent forecasting, but have opted to keep the period to 5 years, as opposed to a longer outing period, to reduce forecasting risk and to factor in the volatile historical price returns of AQST shares. 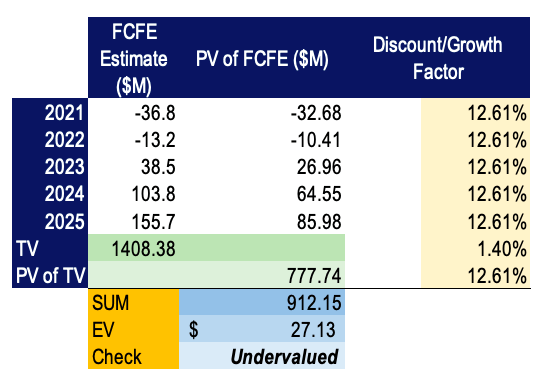 The above analysis shows favourable upside potential on today’s trading price, where the market has punished AQST based on the recent news regarding the FDA disapproval. The upside in valuation is supported by P/Sales of 2.37, and factoring in the company’s debt, the EV/Sales figure of 3.36, both of which sit well below the industry median. It is important to factor in the debt of the company in a complete valuation for AQST, firstly due to the company being currently unprofitable from the bottom line, and secondly, as AQST is highly leveraged and debt/FCF sits around -1.7x, meaning there is little to no chance of accelerating the company’s contractual obligations, both to senior secured note holders (fixed at 12.5%, with a prepayment contingency when premiums may reach 101.5-112.5% of outstanding principal, depending on the lockout period) and to its loan facility originated earlier this year. Any improvement in the debt/FCF figure will place the company in a favourable position to exercise the call provision, thus improving the balance sheet and garnering additional access to capital, should it wish to issue additional debt prior to the 2025 issues maturity date. Additional valuation metrics are unfruitful at this time in the absence of profitability.

The most obvious risk to potential shareholders is value erosion in the form of the current price trajectory continuing south. YTD shareholders have seen low compensation for the downside risk at play. However, this was not the case prior to September 25th, where the smoothed Sortino ratio average for the year was around 2 on the nose. Should the share price shoot back up to pre-selloff levels, then investors will be adequately compensated for the level of downside risk at play. To hedge against the potential downside and volatility in general, one may consider purchasing out of the money November put options at a strike of $7.50, or perhaps set up an iron condor and initiate an option put/call spread, if one believes the stock price will remain within plus or minus 1-2 standard deviations of today’s trading, for example. One may consider this method more viable than owning the underlying stock, also, to further reduce exposure to the downside. Potential risk is limited within a smaller range this way. Consider the purchase costs of the contracts into the total return to be received versus the potential upside, based on the charts and buying the stock alone, and compare the two.

Furthermore, the company sits unfavourably from a solvency perspective, as the interest expense is not well-covered from the EBIT total, at only 0.14x coverage from our last analysis. This may be concerning considering the high coupon on the issued senior secured notes, paying a fixed 12.5% quarterly payment, that is secured by intellectual property. Therein lies risks to the company, as default risk seems high. As mentioned, the company is not in a position to capitalise on the call provision should the premium on each note reach its call value, so this presents as a factor investors should consider seriously. Short-term liabilities are well covered at over 3x coverage, which is satisfying. What is unsatisfying, however, is the company’s poor ROIC, ROCE and ROA, which can be observed in our previous analysis. We often find that valuation is married to these measures, so with poor scores in these areas, perhaps it may be more viable for investors to enter via the option pathway versus holding the underlying stock, if one believes that this figure is unable to turn around. We intend to have a serious look at the company’s progression in these figures in the upcoming earnings call to get a strong insight into what is in store for the near- to medium-term future in AQST’s case.

Provided the market regains confidence in AQST, recent history has shown us that support gathers quickly and in large volume for this company’s stock. Please remember that historical data is not the overbearing indication for future movements, however. There are also fundamental flaws within the company. Though, based on the charts and recent market sentiment, the stock may be oversold and an uptick could potentially be on the way for those with a higher risk appetite. Investors should seriously consider an option setup to benefit from the movements in price. However, if willing and able to bear greater risk, then the potential upside is great to position for a swift exit, provided any run-up to the recent high of ~$9. We would advocate to keep the position size small, also, to allow for greater reallocation scale up to this number, but also to enable a swift exit if the trajectory continues south. We are confident AQST will bounce back from this and the market will continue to see the value in growth here. Besides, the company will refile the application, and once approved, empirical evidence shows that the stock will benefit from this greatly. Markets overreact to good news too, remember.

Disclosure: I am/we are long AQST. I wrote this article myself, and it expresses my own opinions. I am not receiving compensation for it (other than from Seeking Alpha). I have no business relationship with any company whose stock is mentioned in this article.