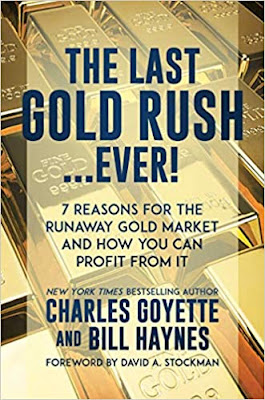 The Last Gold Rush…Ever!: 7 Reasons for the Runaway Gold Market and How You Can Profit from It has arrived in my mailbox.

It is written by  Charles Goyette and Bill Haynes with a foreword by David Stockman.

The Last Gold Rush…Ever! makes a powerful case that the US dollar and the global monetary system are headed for a world-changing crisis, describes the ways it will unfold, and explains why owning gold is a vital means of protecting yourself, your family, and your wealth.

If you had foreseen the financial confusion of the Carter years, or the exploding debt in the Bush years, or the Federal Reserve’s “money printing” spree during the Obama presidency, you might have profited richly from the resulting bull markets in gold and silver.

But today’s governmental recklessness dwarfs each of those episodes. Add other accelerants to the dollar and debt crises—including currency and trade wars, an unaffordable military empire, and a juggernaut of domestic state socialism—now converging to fuel an era of monetary destruction that will drive gold prices to unimaginable heights.

In this unique collaboration, two gold experts—New York Times bestselling author Charles Goyette, with years of commenting and writing about gold, the dollar, and the economy from outside the industry, and Bill Haynes, with decades of trade-by-trade, tick-by-tick experience inside the precious metals markets—triangulate their views to prepare readers for The Last Gold Rush…Ever!

The last Gold Rush… Ever! provides the essential orientation you need for the endgame upon which we have embarked. Washington and the Fed are in the process of putting the coup-de-grace on capitalism and sound money, so if you are to be prepared to protect yourself and your family, nothing could be more timely than this book.

One more thing. Arthur’s Charles Goyette and Bill Haynes have detailed how Keynesian central banking has poured the kerosene that ignites the debt Inferno. But they don’t stop there. They describe a series of accelerants – trading currency wars, a war on cash, a new Washingtonenthusiasm for the deprivations of socialism, weaning worldwide dollar hegemony, and the demise of America’s global military empire – that will make this bonfire of calamities burn hotter, the dollar lose value faster, and the gold price race higher than those who fail to read this book might ever supect.