The End Of The 60/40 Portfolio Explained

A typical financial advisor will preach that a 60/40 stock/bond portfolio based on Modern Portfolio Theory creates outsized returns with adequate hedging. Risk parity is the institutional equivalent of the main street 60/40 portfolio. With over $1.4 trillion of assets under management, risk parity leverages bond exposure to create equal risk (volatility) based on this notion of anti-correlation. This strategy has yielded an average of 10% since 1980 with 40% less volatility than a pure stock portfolio.

Despite this, Bank of America, Morgan Stanley, and a host of investors worldwide are declaring that the 60/40 portfolio is now obsolete. This article will explain why 60/40 has performed so well in the past four decades, arguing that recency bias in the financial advisor industry is exposing investor capital to more risk than either party understands. Next, it explains why this portfolio is now doomed to underperform. Lastly, it offers an alternative portfolio allocation that I believe will outperform risk parity in the decades to come. 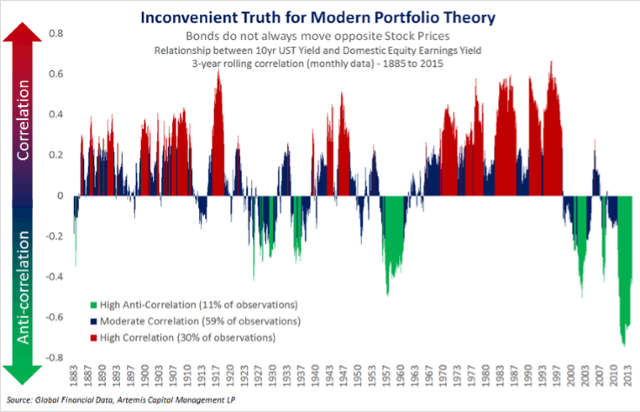 The anti-correlation of bond and stock prices began in the 1990s. Therefore, risk parity was able to outperform the broader indexes during the bursting of the tech bubble in 2000 and the GFC in 2008. Yet the chart above makes it clear that for most points in history before 2000, the idea that gains in the bond market will offset losses in the stock market (and vice versa) simply did not hold true. Institutional finance has convinced itself that anti-correlation is a new paradigm and leveraged the entire financial industry to this idea.

By this point, the reader should understand that the risk parity concept of anti-correlation between stock and bond prices is historically inaccurate. Not only that, but also prices display positive correlation more than not. The last instance where both stock and bond prices fell simultaneously occurred in the 1970s. With most retirement accounts and several hedge funds married to this idea, a reversion to the 1970s paradigm would be disastrous. The next section will more deeply examine why the anti-correlation exists and why it may reverse.

The answer is two-fold. Firstly, the United States has not faced inflation risk since the late 1970s. The last Fed chair to manipulate the rate of interest to combat inflation was Paul Volcker. Secondly, the Federal government continues to increase its debt burden without rebalancing the economy. Therefore, central banks are under constant pressure to maintain aggregate demand by slashing rates.

The market cycle playbook for the last four decades is as such: 1) the U.S. economy experiences weakness because consumers and businesses cannot make their debt service payments after excess debt and leverage exposed by an exogenous shock or a simple attempt at rate normalization, 2) as a theoretical release valve to maintain aggregate demand, the Fed slashes interest rates and expands the money supply, and 3) with interest rates at record lows and plenty of liquidity in the global economy, investors, consumers, and businesses once again take outsized risk that creates new imbalances. Rinse. Repeat.

As stock prices decrease under fundamental pressures, bond prices increase due to the Fed response. If inflation were a risk, the Fed could not cut rates without risking runaway inflation. Because it has not been a risk in roughly four decades, the Fed policy response that creates this anti-correlation has continued unimpeded. However, this response function has reached its limit. The 60/40 bubble will not burst due to the return of inflation, but due to the limits of monetary policy.

READ ALSO  Escobar: Baghdad On The Potomac - Welcome To The Blue Zone

Look at the 10 Year Government Bond Yields below. Global Central Banks have pushed yields lower and lower to the nonsensical figures shown. For Japan and much of Europe, yields are negative. For the U.S., Canada, and Australia, rates are below 1%. Only two countries on this list of 20 have 10-year yields above 2%.

At 0 bps, sovereign bonds lose credibility as an asset class. Investors receive no capital gains from bond prices unless yields go deeply negative, and yields are generally below the rate of inflation, guaranteeing that investors will lose money by the time their bond reaches maturity. Sovereign bonds will provide no yield and no returns in the future while a return of inflation would spell disaster for bond prices. Sovereign bonds have all the reward of cash but all the risk of equities. The secular bond bull market is coming to an end and most portfolios are unprepared.

Pensions, insurance companies, endowments, and risk parity funds cannot buy bonds yielding zero percent and still meet their desired 7.25% returns. They will either continue to reach for yield in dangerous places such as junk bonds and equities or will need to restructure their portfolios. Without restructuring, it is likely that these portfolios will need to be bailed out or supplemented for pensioners to receive their promised retirement money.

We will soon reach peak interest rate suppression, and thus peak bond prices. The tools that governments will use to reflate the economy are the Fed printing press and MMT like fiscal policy. The Fed can solve liquidity issues with the printing press, but not the solvency issues created by reduced cash flows from the COVID-19 economic halt. Making up for this lack of demand will be stimulus checks to individuals and small businesses (i.e. helicopter money). This is a new era of combined monetary and fiscal response brought about by interest rates hitting the zero bound before the crisis even took hold.

Post GFC liquidity injections never created the price inflation that many investors assumed it would. This is due to the fact that much of the liquidity remained in the banking sector and eventually made their way to financial assets through corporate borrowing. The quantity theory of money tells us that consumer prices are determined by money supply x velocity of money (mv=py). If money supply increased while velocity decreased in equal parts, prices remain the same. However, if a stronger fiscal stimulus response occurs, I would expect velocity to increase because direct to consumer checks overrides the banking sector. While equities still perform well in an inflationary environment, real assets such as gold, real estate, and commodities will see a new bull market.

Lastly, the risk of currency devaluation runs incredibly high – whether inadvertently through massive money printing and a record $5.8 trillion balance sheet or purposefully through a new Plaza Accord. A weaker dollar has stimulative effects in that it creates economic growth through higher exports and reduces the cost of interest payments on existing debt. The Fed and Treasury want a weaker dollar. Once a weaker dollar is achieved, emerging markets will rise again as they will have less pressure from dollar denominated debt. Emerging market equities and debt replacing western economy debt is an option, but this will not play out in the short-to-medium term.

This article explained why the 60/40 portfolio has been successful and why it cannot continue this success into the future. Unfortunately, most of the industry suffers from recency bias and has not woken up to the reality that holding sovereign bonds is the equivalent of holding cash. Because sovereign bonds provide minimal reward with outsized risk, I recommend investors reduce exposure. As the Fed continues to throw the kitchen sink at markets through unprecedented QE, markets face the risks of currency devaluation and/or inflation. Anything with fixed supply would outperform as currencies devalue.

Disclosure: I am/we are long GLD, SPY, BTC-USD. I wrote this article myself, and it expresses my own opinions. I am not receiving compensation for it (other than from Seeking Alpha). I have no business relationship with any company whose stock is mentioned in this article.