Major market moves are like a big spring; markets contract, building potential energy, and then expand with accelerated force. The trick is to avoid the big contractions and ride the expansions with confidence. To exploit that, it’s important to recognize a subtle distinction between risk identification and market timing. I long ago gave up on identifying every up and down move in the stock market, but I have found a reliable method for identifying high-risk intervals and avoiding them. Sidestepping those periods can exploit that spring effect and earn outsized rewards.

If you’re a trader who relies on the news for buy-sell cues, consider the big flaw in that approach. The media typically reports day-old news in a world that trades in real-time. Even if a news report appears to immediately follow the release of fundamental data, by the time talking heads get the word out and you place a trade, the algorithms have reset market values. That’s a game that can’t be won.

Yet cycles of risk-on/risk-off typically run for weeks; identifying those cycles is not dependent on beating the news reports or beating real-time algorithms. If you can get out of stocks before a serious contraction and get back in to ride the rebound with confidence, there is a lot of money to be made. Media gibberish becomes low-amplitude noise once the big cycles can be identified.

Live trading since October 2019 has confirmed the validity of 13-year modelled data. In documented signals alternating SPY and IEF holdings for the last year, the algorithm produced 57% gains compared to 8% if SPY were held continuously. Recently, Easy VIX members following the algorithm watched from the sidelines as markets fell prior to election day, and then reentered on election day when media memes reflected fear of election night. The S&P is up 5.3% in the 4 days from election day to the following Monday’s close.

On February 21st of this year, we sold equity holdings and reestablished them on March 31st, avoiding almost all of the COVID-driven meltdown. Year to date, the net result has been a 46.1% gain using the algorithm, again alternating between SPY and IEF, versus a 1.5% gain if SPY were held continuously.

But enough about history, why and how can anyone identify risk-on/risk-off cycles?

The VIX term structure consists of the sequence of VIX futures contracts. At any moment, the structure reflects market quotes looking forward for 8 or 9 months; the nearest contract expires less than 30 days from now (prompt month) and quotes extend to contracts that will finally settle about 250 days in the future. For my purposes, I’ll focus on the first 4 contracts.

The first quarter of 2020 provides a good example of how the structure can vary. The following graph shows a healthy market on January 2, 2020 in blue and compares it to a very fearful market during the COVID market collapse on March 16, 2020 in red. 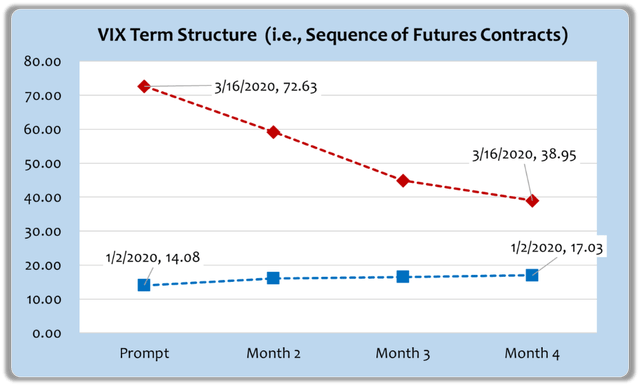 The upward tilt of the normal market is obscured by the extreme values of the March 16th quotes but note that the January 2nd quotes rise about 20% over the four-month span. The terms of art for these market conditions are ‘contango’ for upward tilts and ‘backwardated’ for downward tilts.

To understand why the shape of the structure matters, consider what VIX futures reflect. VIX is a measure of the implied volatility of S&P options, and volatility equates to risk. VIX futures reflect traders’ expectations of what risk environments will exist on each forward horizon. Under normal circumstances (blue curve), the near term is a less risky environment than the long term because current conditions are largely known while conditions in the future are less certain. When the curve goes backwardated as it did in March, VIX futures traders are screaming that current conditions are so risky they can only get better in the future. But, by themselves, neither the level of quotes nor the shape of the curve can tell us how risk conditions are changing, and to identify conditions as they are emerging, we need more.

The term structure carries powerful and exploitable risk messages, but to decode them it takes significant quantitative effort. I’ll use the period from January 31, 2020 through March 31st to illustrate.

The first step is to create a quantifiable metric from the shape of the term structure. I call it the SHAPE metric and it measures the average discount of each monthly contract compared to the next contract. That red March 16th curve above reflects a backwardated (18.6%) SHAPE. It’s shown as a negative number whereas contango shapes would be quantified as positive SHAPEs.

If you were to quantify and then plot the SHAPEs from January 31 through March 31st, you would get this graphic which also shows the buy and sell signals mentioned. 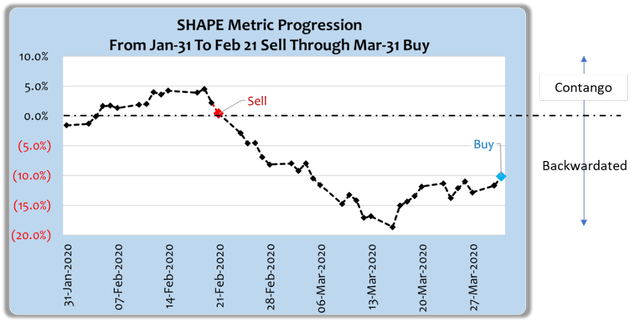 You might think it’s counterintuitive that the February 21st sell signal came near the peak of contango readings while the March 31st ‘Buy’ came closer to the trough of backwardated readings. We need to discuss the rate of change in the SHAPE metric to see how the risk messages can be extracted. Actually, we need to look at the rate of change for two look-back periods – a long-period Slope and a short-period Slope. I capitalize ‘Slope’ to distinguish the metrics from the commonly used word. Let’s look at the Jan-31 to Mar-31 progression through a different lens. 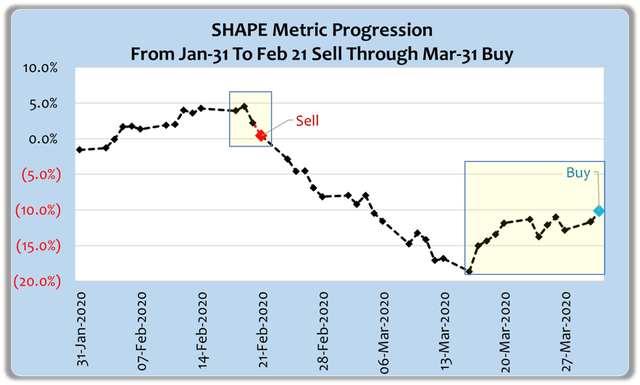 Note the sharp reversal of the trend in the SHAPE readings in the three days ending on February 21st. It’s easy to see how a short-look-back Slope metric would pick that up as a suddenly increasing risk perception on the part of VIX futures traders.

By the way, in large measure the whole approach rests on an empirical observation that VIX futures traders present a sophisticated risk barometer and the quotes that they produce are an accurate indication of emerging risk-on/risk-off cycles. To be a truer indication of risk, VIX-futures trends must diverge from the daily price gyrations which are often driven by media hype. Nearly thirteen years of modeled data and thirteen months of live trading say all that is true.

You could probably look at a graph like that and wonder why some movements trigger signals and others do not. The answer lies in the model calibrations which I will describe next.

The Easy VIX model consists of two component algorithms which I refer to as EZV-1 and EZV-2. Both use the same SHAPE metric and their own Slope metrics of different look-back periods. The key to performance is calibrating, for each algorithm, actionable triggers for the SHAPE as well as the look-backs and triggers for the four (two per algorithm) Slope metrics, and then reconciling the two algorithms in a way that minimizes drawdowns and maximizes returns.

It’s important that those calibrations are not simply back-fitting efforts. Some modelers build a test data set, optimize parameters, and then utilize those parameters for the future. In doing that, results rely on a single calibration and the hope that it will work in the future. If and when it begins to underperform, it becomes necessary to recalibrate the algorithm and hope the new one works better. Algorithm maintenance becomes a routine endeavor, and one never knows if the newly calibrated maintenance effort will work better than the last.

Overfitting is a big concern when your process is a single test-data set because whatever parameters you build into the structure could produce an accidental result for the single calibration. If a process is replicable 3100+ times, it’s unlikely to be an accident. And using trailing optimizations eliminates any need for algorithm maintenance and dealing with questions of deteriorating performance, because of the organic nature of replicable updates.

Here is the performance of the Easy VIX algorithm since October 2019 when the service began; SPY is the dark color and any place that cumulative algorithm performance was inferior, SPY shows in red. 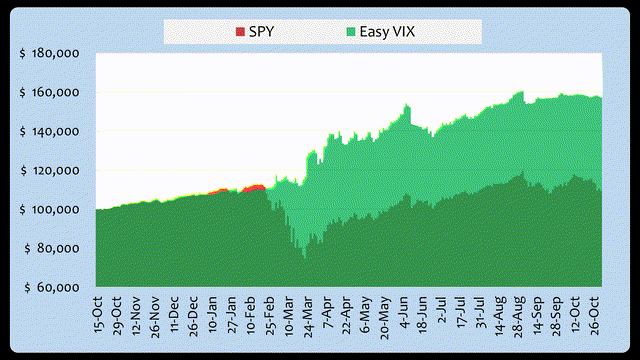 I’ve provided enough information here to stimulate your thinking, and maybe help you make some productive decisions going forward. Obviously, I think you’d do better benefiting from the trailing optimization process I described, but I find that members of the service are thinking people and they only adopt this after some thought. So, I simply ask you to start thinking if your style might fit the approach. And stop believing those talking heads who are largely providing you with stale gibberish.

The Easy VIX celebrated its first full-year anniversary in October and membership has grown to more than 220 members. Look at the all-5-star reviews of the service here. To maintain a balance that allows me to provide the value members expect, pricing will be changing, only for new subscribers, on November 16th. All members at that time will be grandfathered at their legacy rates. Effective Monday, November 16th for new subscribers, the annual rate will move from the current $750 to $900. Monthly pricing will move from $95 to $110. Give The Easy VIX a try.

Disclosure: I am/we are long SPXL. I wrote this article myself, and it expresses my own opinions. I am not receiving compensation for it (other than from Seeking Alpha). I have no business relationship with any company whose stock is mentioned in this article.

Additional disclosure: I trade a basket of ETFs and any tickers mentioned using the algorithm described as well as other analyses. The algorithm monitors daily performance and periodically recalibrates parameters and triggers in a stepwise sequence. New calibrations are applied prospectively only, and not to the historical period from which they were derived. The algorithm described and the discussions herein are intended to provide a perspective on the probability of outcomes based on historical modeled performance. While I track one or more reference portfolio(s), I make no recommendations as to specific investments. I reserve the right to make changes to the algorithm as I deem appropriate. Neither modeled performance nor past performance are any guarantee of future results.

Previous PostNissan’s prospects brighten as China rebounds, but struggle ahead for weakened car makerNext PostEU to buy up to 300m doses of BioNTech-Pfizer’s Covid vaccine