The Dark Outlook For Non-OPEC Oil

The period from 2010 to 2014 witnessed the highest sustained oil price environment in recent memory, with Brent averaging $110 a barrel and WTI $95 a barrel. This high oil price era ushered a period of unprecedented capital investment in oil and gas extraction, as global capital investments rose from $500B in 2010 to $700B by 2014 (do note some of the increase is due to cost inflation, hence, the magnitude of the capital spending increase, and its subsequent decease, is tampered to some extent by changes in unit cost).

Taking in consideration the 3 to 5 years time lag between increased capex and a production response, the impact of the 2010-2014 O&G capital investment surge had been poised to impact global oil production later in the decade:

The delayed response between investments in supply and the resulting new supply has historically been the key reason as to the low correlation between spot prices and global oil supply. It’s only natural that once an oil company has invested billions of dollars in a developing a given oil resource, production would ensue upon completion of so project regardless of price.

Where did all the oil go?

Based on the above overview, one would expect global non-OPEC oil production to have surged over the last three years, and so despite the collapse in oil prices. Looking at the latest EIA STEO, at first glance one would conclude that indeed non-OPEC oil production has surged over the last several years from 60.2M barrels in January 2015 to 65M by May 2019, an increase of 4.8M barrels in 3.5 years. However, a closer look at the data reveals a different picture. Related: Oil Flat Despite Middle East Tensions

The Non-OPEC supply basked is a heterogenous basket of every oil producing country outside of OPEC, the majority of which generate their oil supply from conventional resources, namely onshore and offshore conventional fields. The only two non-OPEC countries that generate the majority of their oil supply from non-conventional resources are: Canada (Oil Sands and Tight Oil) and the US (Tight Oil). Unlike conventional oil production and oil sands production, tight oil production is a short cycle resource, said another way, the time lapse between investing in new tight oil supply and the resulting oil is about six months, a much shorter time frame as compared to other competing sources of supply. In this context, obtaining an accurate picture as to the state of global non-OPEC oil supply, one must exclude US oil production (most of which is from tight oil) from the data.

Non-OPEC supply (with and without US production):

As can be seen from the above, non-OPEC supply (excluding US) has held at an almost perfectly flat 45.4M barrels from January 2015 to May 2019. The reason this has been the case is that production increases in countries such as Canada, Brazil and Russia have been offset by declines in countries such as Mexico, China and Colombia. Basically, the entire growth in non-OPEC supply since January 2015 (4.8M barrels) has been generated by the US alone. This bears repeating: 100% of non-OPEC supply growth over the last 3.5 years has come from a single country: The United States.

Why should investors care?

The aforementioned state of affairs is highly troubling for a number of reasons. First, the US tight oil industry has been a money losing proposition for years, with the top 40 shale oil and gas producers spending $200B more than they brought in over the last decade according to the Wall Street Journal. These sustained loses have soured investors on the industry and sharply reduced its access to external  funding. Furthermore, issues with well spacing, slowdown in productivity improvement and a diminishing inventory of high quality locations are tempering the industry future growth expectations.  This is not to say that US shale oil production is about to collapse, but its expected rate of growth over the next 3 years is unlikely to match the robust rate growth we witnessed over the last 3 years. Related: The “Polar Silk Road” Could Be A Gamechanger For Natural Gas 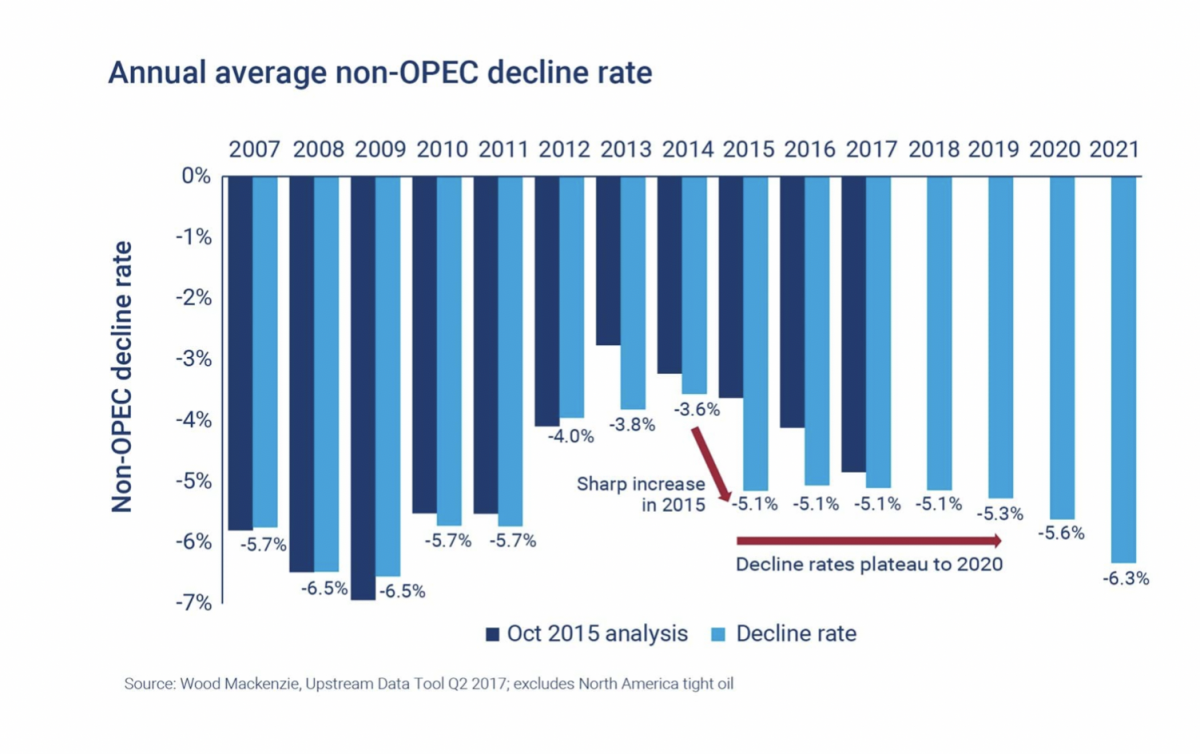 According to a recent Wood Mackenzie study, average non-OPEC oil production decline rate (excluding US tight oil) has held steady at 5.1% since 2015. This is the result of heavy investments made during the boom years and a host of temporary production decline mitigation measures undertaken post the oil price collapse. Wood Mackenzie expects this steady decline rate to exceed 6% by 2021. An increase in the non-OPEC decline rate from 5.1% to 6.3% may seem trivial, but when applied against a 45.4M production base, it translates into 550K in additional annual declines. Most notably such an acceleration in the non-OPEC (ex-US) decline rate is set to take place against a backdrop of a substantial decline in new non-OPEC mega projects supply additions: 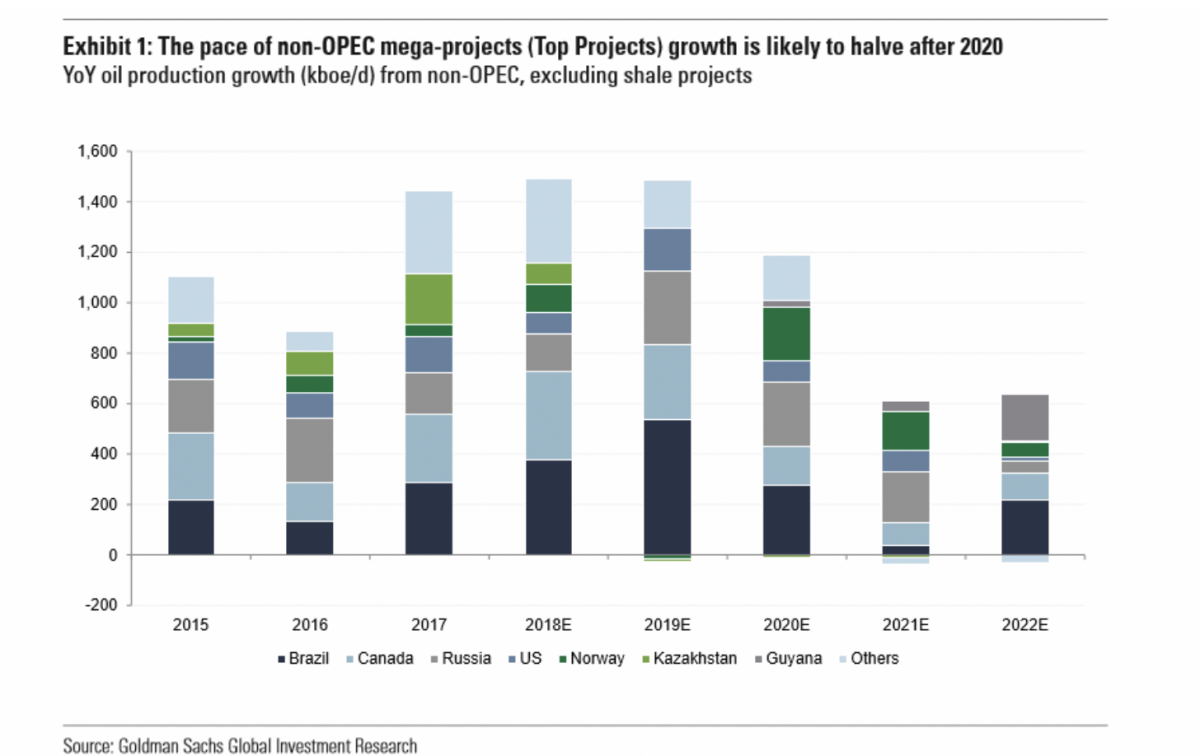 What this analysis indicates is that the impact of the late 2014 oil price collapse is about to hit non-OPEC oil supply from two fronts: through an increase in the global non-OPEC decline rate and through a significant deceleration in new non-OPEC mega projects supply additions. The combined impact of these two forces will exceed 1m barrels in lost production per year by 2021. As non-OPEC oil supply commences its inevitable decent by 2021, the burden of compensating for production declines and meeting demand growth (which remains robust despite the advent of EV cars) will fall on two sources: US tight oil and OPEC.

Can US Tight Oil and OPEC shoulder the burden? 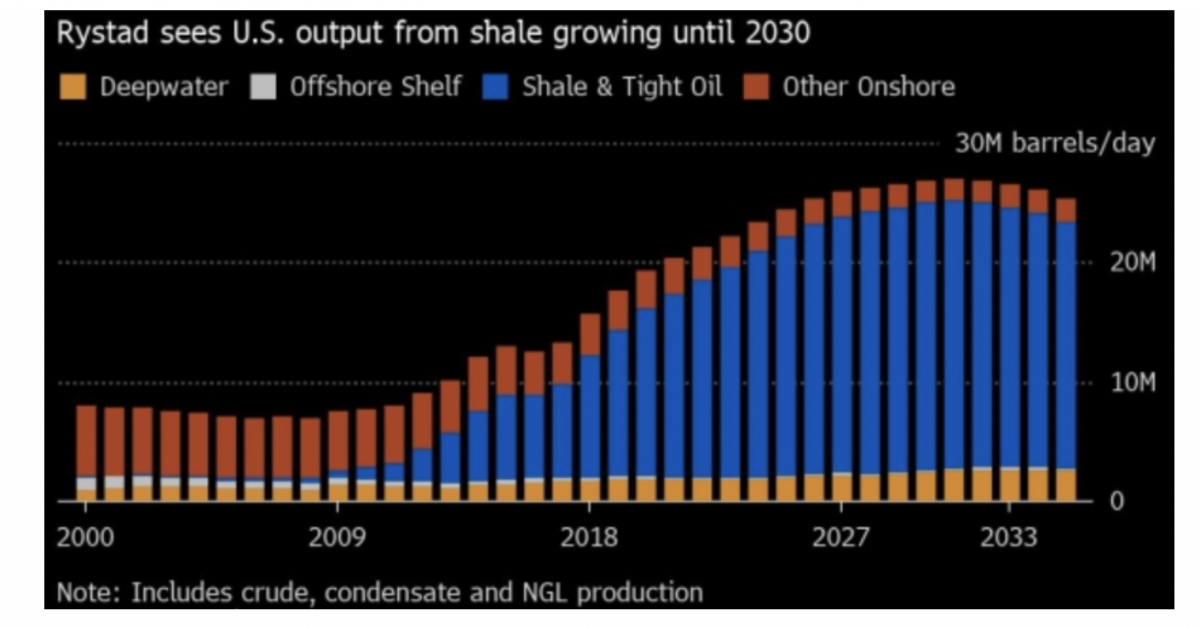 The mismatch between the projected flattening in US tight oil production growth and the expected decline in non-OPEC supply leaves OPEC as the sole source of additional supply.

Theoretically, OPEC has the capacity to materially increase supply in the coming years to compensate for the diminishing role of US shale. Saudi Arabia, UAE and Kuwait are supposedly in position to increase production by 1.5M to 2M barrels in relatively short order. Nonetheless, the cartel capacity to increase supply is limited by a number of factors such as the political will to lower oil prices, and the increasing loss of production due to a number of adverse geopolitical developments: the imposed sanctions on Iran, the political turmoil in Venezuela, the raging civil war in Libya, and unrest in Nigeria.

The oil market has been lulled in complacency by the phenomenal surge in US tight oil production, this historic, and potentially destructive deployment of capital, has masked to a large degree the incredible fragility of non-OPEC (ex-US) oil supply. As shale oil growth flattens by 2021 and non-OPEC (ex-US) supply exits its 45M barrels plateau, the oil baton will revert back to OPEC, an organization that has been repeatedly written off as a relic of history, and yet has proven again and again its paramount role in dictating the direction of oil prices.

By Nawar Alsaadi for Oilprice.com