Par Technology (PAR), as a market-leading provider for POS SaaS software (“Brink”) to the restaurant sector, has of course been affected by the outbreak of the coronavirus as customers are staying away from restaurants and many are closed. 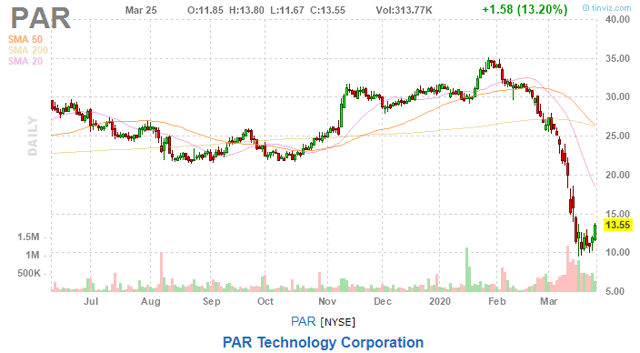 Fears about the impact of the coronavirus and associated lockdowns revert to:

The latest figures we have been able to find are that restaurant transactions are down 8% from last year, but this was for the week up to March 15, in any case, more relevant for Brink (Fastcasual):

Things on the ground move with amazing speed and the results for week up to March 22 are surely much worse. Basically, much of the industry is coming to a sudden halt.

However, it remains to be seen to what extent this will impact the company:

Management argues that to date (March 12) it hasn’t experienced any impact (Q4CC):

Second, we have not experienced any customer impact to-date. This could change at any time but our customers have not expressed any change in their plans yet.

The change in its plans refers to upcoming deployments which have already been contracted (backlog).

However, a week can be a long time under the present circumstances. With most of its customers on greatly reduced cash flow and uncertain outlook, this isn’t going to be business as usual for quite some time.

Management argued that more upmarket table service restaurants are likely to suffer more, like during the financial crisis. While that is likely, the fast-casual restaurants which make up the bulk of its clientele aren’t exactly immune, so we’re not too optimistic about the immediate prospects for most of the customers.

The company also sees an increased need for its suite of solutions (Q4CC):

As restaurants pace for slowing table service traffic, we expect off-premise dining, online ordering and delivery to become higher priority all of which modern point of sale product. Restaurants will need to find a way to serve customers in this new environment while managing labor cost in their own supply chains. We think this all highlights the continued need to technology investment. Moreover as consumers avoid physical restaurants and drive thru will likely receive increased attention. This should benefit part of suite of solutions.

While that makes a lot of sense, and the ROI on Brink is perhaps better than ever as a result (and recent additions of functionality, see below), it remains to be seen how cash-strapped clients will pay for that. ADW analyst Adam Weyden suggested on the CC that management might have to throw in big discounts or even free hardware, which is an idea to consider.

Customers can ask for relief on the Par website update, and if it has closed restaurants the company automatically stops billing. Its blog has regular updates.

There is even a map on its site which shows the different level of restrictions for restaurants in each state: 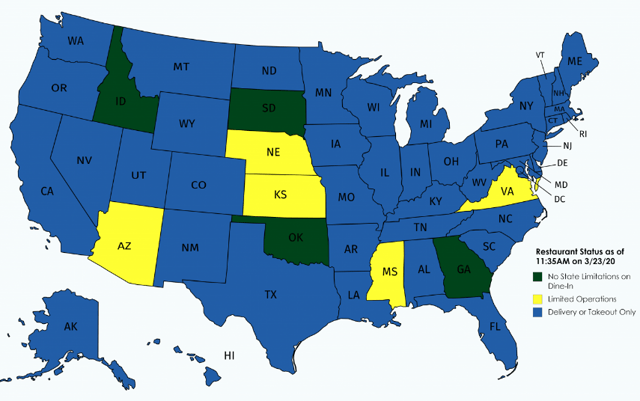 The company completed its $42M acquisition of Restaurant Magic, a leading back-office solution and this should provide useful cross-selling opportunities.

Par Pay is a great step forward as Brink was the only POS system without its own merchant solution and this has been the biggest earner for the competition.

Par is trying to get ahead of them by offering a much simpler, more transparent fee structure (Q4CC):

Restaurants pay just one bill for multiple services in part easy to understand pricing model will limit the hidden fees common with other payment processes arrangements. Unlike other vendors PAR will guarantee rates for the term of the contract ensuring restaurants have a clear picture of what is included and what is not. Our hope is to be the clean sheet in a market filled with many overcharging.

But needless to say, Par Pay isn’t generating much in terms of fees with restaurants empty.

Which is where its September 2019 acquisition of Drive Thru is coming in. Management argued it had performed better than expected in Q4, and it has just expanded the opportunities with PARk-it, a new module introduced on March 24 which (Fastcasual):

can transform any restaurant concept into a drive-in without additional hardware, according to the email. The solution allows restaurant customers to scan a QR code, place an order and have it delivered. Customers use their mobile phone to order and pay. Restaurants can deliver the orders to customers in their cars or have them pick up at the restaurant.

Brink also facilitates easy online ordering and integrates with over 22 online ordering platforms like GrubHub (NYSE:GRUB) and even helps restaurants getting on these. This is important, as delivery is likely to become the main source of revenue for restaurants for the foreseeable future.

We can conclude that the incentives for investing in a POS SaaS system like Brink have considerably increased although much of that is theoretical right now, with customers and potential customers scrambling for cash.

Here is the development of the most important metrics for Brink the last number of quarters:

The Q4 figures were disappointing to us, we were expecting an acceleration in deployments. Management argues this was the result of a critical part that was unavailable, negatively impacting both installs and bookings (but the issue has been remedied).

The open order backlog jumped to 1390 stores due to an accounting change. Hardware revenues associated with Brink deployments grew $2.5M or 90% in Q4.

While the increase was mostly due to the move towards its ERP system which changed invoicing towards the end of the quarter, this situation isn’t likely to improve anytime soon, needless to say.

One should also consider that the free cash flow was impacted by:

The company was fortunate with the timing of the offering of its 2026 secured notes on February 6, and this is giving the company, per the linked PR:

The initial conversion rate for the Notes will be 23.2722 shares of the Company’s common stock for each $1,000 principal amount of Notes (equivalent to an initial conversion price of approximately $42.97 per share of the Company’s common stock)… The Company estimates that the net proceeds from the sale of the Notes, after deducting initial purchaser discounts and offering expenses, will be approximately $101.4 million (or approximately $115.9 million if the initial purchaser exercises in full its option to purchase additional Notes). The Company intends to use approximately $66.25 million (excluding cash payments relating to accrued interest and fractional shares) of the proceeds of the offering and deliver 722,423 shares of its common stock as consideration to repurchase $66.25 million aggregate principal amount of its 4.500% Convertible Senior Notes due 2024 (the “2024 notes”) through individually negotiated transactions expected to close concurrently with the offering.

Together with the $28M in cash the company had at the end of Q4, this should take care of cash needs for quite a while, and we are inclined to say that the company could also sell its government business. Dilution hasn’t been much of a problem (although there are another 2.8M shares coming from the conversion of the notes in 2026) and neither is stock-based compensation excessive:

Given its cash kitty of roughly $77M, management argued it is in a good position to acquire other companies and technologies or do a buyback. That remains to be seen, as we would like to have a better grasp on its cash flow this year.

Valuation took a plunge, no surprises here. Under more normal circumstances this would be a give-away valuation. With an EV of $250M, that’s basically $50M for Brink if you value the government business and the hardware business each at $100M.

Many unknowns for the foreseeable future, most notably how cash flow, bookings and deployments are going to be impacted by the partial closure of restaurants although there is some compensation from Drive Thru and takeout.

While there is the case that restaurants need a POS system like Brink now more than ever and the company could throw in greatly reduced or even free hardware deals as an incentive, we’re not sure how many companies are going to bite given the cash constraints.

The share price has crashed, but we do see some gradual recovery as control over the outbreak is likely to arrive at some time. Buying now is likely to result in a great bargain for when that day arrives.