The Colorado ski resort with no crowds, no queues — and no lifts

America’s newest ski resort reveals itself in a field of rutted mud, frozen hard after a messy thaw the day before. It’s the middle of March and I’ve come to a ranch in northern Colorado to see — and ski — a purported landmark in the evolution of a multibillion-dollar industry. My giant rental pick-up truck bounces over mud canyons as I pull up at the base station — a big tent next to a shipping container.

Bluebird Backcountry, which is laid out on a small peak above the appropriately named Muddy Creek, has a marked boundary, run names and two ski patrollers. But there are no maintained pistes — nor any lifts. The “human-powered” ski resort — the first of its kind in North America — offers only one way up: by walking on touring skis equipped with climbing skins.

It’s a way of skiing — now booming in popularity — that I’ve enjoyed since the age of 10. I’ve searched for peace and good snow in the Alps, Arctic Norway, remotest Canada and even Uzbekistan, but never at a silent resort on a highway outside an Old West town, where Trump 2020 caps outnumber ski helmets by a significant margin.

Bluebird, which is due to open for its first full season in December (I visited during a 14-day soft launch), is an experiment conceived before the pandemic. Yet, by viral serendipity, it may have found a happy spot on a tattered global piste map. Months after ski resorts became Covid-19 hotspots, with their sardine-can cable cars and thronging bars, opening one without lifts or crowds feels, well, timely.

Inside the tent, which stands 20 miles north of Kremmling, the nearest town, and 125 miles from Denver, Erik Lambert and Jeff Woodward, the brains behind Bluebird, are helping check in skiers. There are plastic lawn chairs and whiteboards scrawled with snow reports and snack prices. A rack of top-end rental touring skis and boots stands in one corner. I walk outside, shed a layer and hike up into the mist.

Off-piste or backcountry skiing was already booming in Colorado before Covid-19 prompted a rush to the great outdoors. And big-ticket resorts were already trying to adapt. The day before I visit Bluebird, I ski at Vail, where the Colorado Snowsports Museum charts a backcountry tradition that exploded after the second world war. Veterans of the state’s famous 10th Mountain Division of skiing soldiers popularised the sport, going on to open dozens of resorts, including Vail. 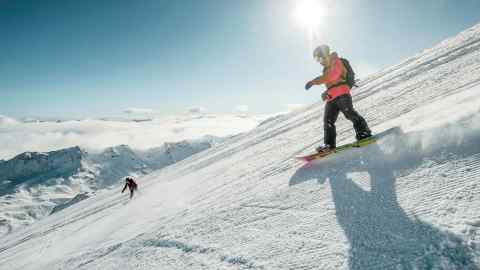 Vail is vast today, with 31 lifts and a flurry of luxury hotels, including a newly renovated Four Seasons. The centrepiece of Vail Resorts, which owns 37 resorts worldwide and recorded profits of $300m last year, it epitomises the corporate face of 21st-century skiing. Yet even Vail is trying to highlight its backcountry heritage. A “trails less travelled” slogan promotes the “true remote backcountry ski experience” available at its outer bowls.

Vail has some great off-piste terrain, but at resorts like these, falls of new snow bring out great snow-stripping swarms of Gore-Tex-clad locusts on skis. That’s if they’re not stuck on the notoriously clogged I-70 highway from booming Denver — or in a lift queue.

Bluebird is tapping into a backlash. Increasingly, backcountry rookies are seeking smaller, family or community-run resorts, including Silverton Mountain in Colorado’s southern San Juan range. But they are also avoiding ticket offices altogether, parking up at remote spots to climb at their own risk.

Mastering the backcountry once required mentorship and time. “Now people are just buying equipment and bypassing the education because they’re like, ‘Get me away from the lifts and the crowds,’” says Lambert, 37. He and Woodward, 38, marketing men who met in the mountaineering club at Dartmouth College, imagined something slightly different: a managed ski area of gentle terrain, where touring, as well as avalanche and safety courses, could be offered alongside good rental gear and an easy-going community. When a friend of a friend suggested an open-minded ranch owner, a lease was signed and Bluebird took flight.

It soon becomes clear as I climb the 300-acre ski area on Whiteley Peak that this is not a place to test the advanced skier. But that’s the point; the terrain is perfect for the novices and mixed-ability couples Bluebird wants to attract. “We’re tired of driving to resorts and sitting in traffic all day,” says David Kramer, a woodworker and backcountry beginner from Denver. I meet him and his friend Kelly Bennett on the skin track. They’ve paid $50 each for day passes. A package including rental skis, boots and safety gear — plus an all-day lesson — costs $199. “It’s nice to be able to get away from people, knowing that there’s also ski patrol,” Kramer adds.

We zigzag through aspens to the base of a little cliff below the peak. I rip off my skins and ski snow of — let’s be kind — variable quality. Yet I happily climb laps of Bluebird until closing, still intrigued by its novelty and grateful for the fresh air and exercise.

That evening, I hang up my skins to dry in my little house at Muddy Creek Cabins. It faces the creek itself, which flows into the Colorado river on the other side of Kremmling. I look up at a sandstone escarpment at the edge of town, expecting John Wayne to appear on horseback at any moment.

The “A Sportsman’s Paradise” sign on the edge of town refers to Kremmling’s hunting and rodeo tradition. It’s also a summer rafting destination. If skiers pass through, they’re probably heading north to Steamboat Resort, 30 miles beyond Bluebird. The Dean West, a restaurant with an attached brewery, is filled with families and workers when I stop for dinner. An old boy called Dave is roaming the tables, sipping a Coors Light under his Trump cap.

Dave is pretty sceptical about Bluebird. But there is an almost forgotten skiing tradition here. In 1950, Joe McElroy, a Kremmling rancher, threw a motorised rope tow up Baker Mountain, right across the road from Bluebird. McElroy loved to ski and, exploring the mountains further north, came up with a name for the kind of light, fresh snow that Coloradoans still covet. He let his friend James Temple, another skiing rancher, use “champagne powder” as a slogan when Temple founded Steamboat Resort, which later trademarked the phrase. But Baker Mountain only survived three winters. The problem: too much snow, which frequently blocked its access track. Seventy years later, it’s not a problem Bluebird has during its soft launch. After a day of laps, with some snow forecast overnight, I make plans to move on after breakfast at the Moose Cafe.

I drive an hour south to Breckenridge, a Gold Rush town turned ski resort (it’s also owned by Vail Resorts). I meet Abe Pacharz, an old friend I skied with 10 years ago in Alta, a backcountry haven in Utah. Pacharz, 39, settled in “Breck” in 2015 and now owns and runs Colorado Adventure Guides, which offers increasingly in-demand guiding and avalanche courses. Pacharz now also runs courses out of Breck Haus, a new boutique hotel right at the bottom of the lifts. The owner, a Denver tech entrepreneur, plans to open a second hotel in Vail this winter, the first of a proposed network of mountain hotels and members’ clubs “for the modern adventurer”. Pacharz swings me a last-minute pod in Breck Haus’s hip take on a ski dorm.

Better still, Pacharz has a day off. We steer away from the resort, where new social-distancing rules have made lift lines long and nervous affairs. Pacharz wants to ski Silver, a classic American couloir that tends to come good once Colorado’s notoriously unstable snowpack settles in late winter.

We park at the start of a hiking trail that leads steeply through pine forests to the summit of Buffalo Mountain, at just shy of 4,000m. Like the guys at Bluebird, Pacharz is big on educating rookies. He wants to impart the value of apprenticeship — and the joy of discovery he still finds on mountains he’s skied dozens of times. “I’ll post a pic to Instagram now and get 30 messages saying, like, ‘Where was that? It looks so sick we want to go!’ And I’m thinking, hire a guide or spend years exploring,” he says as we climb. “Why do people want it to be easy?”

We continue to the summit before dropping back down the ridge and into Silver, a steep, continuous descent of more than 800 vertical metres. We’re the first to ski it after the new snowfall and every turn is a thrill. At the bottom, we push out through a creek bed and have a beer on Pacharz’s tailgate.

Things get weird in Breckenridge that evening when, without notice, the state governor shuts down Colorado’s ski resorts. It’s all a bit “last days of Rome” as I search for dinner on Main Street. And, with weeks to run of Colorado’s long season, there is now only one place to ski: the backcountry.

The next morning, there’s time for a short tour on my way to the airport. Pacharz suggests Coon Hill, a 3,900m peak that sits right on the Eisenhower Tunnel under I-70, which is mercifully free-flowing thanks to the virus. Within minutes, the rumble of trucks fades as Pacharz and his dog Oseetah lead me uphill in glorious spring sunshine. Hours later, I’m on one of British Airways’ last flights out of Denver before the US government’s European travel ban.

“Standing on top of Buffalo may have been the last cool thing I did before sitting in my place for three months,” Pacharz tells me when I catch up with him in late September. Experienced guides and backcountry skiers largely observed lockdown. But within days of the resort shutdown, often novice backcountry skiers rushed to Colorado’s hiking trails. Sales of uphill ski equipment climbed steeply. Resorts are now planning to reopen as normal, albeit with distancing measures, but there are predictions — and fears — here and elsewhere of an even greater rush to the backcountry. “There is a big push to get people educated, which is good for us,” adds Pacharz, who is hoping to make up his lockdown losses this winter.

Having no lifts offered Bluebird no protection from the shutdown, though it only lost a day of the trial season. But more demand — a spike within a backcountry boom — looks good for the experiment. This winter, Woodward and Lambert will move their tent, and the whole Bluebird operation, just up the road to Bear Mountain, which offers 1,200 acres of terrain and, they say, more reliable snow. Five hundred season passes have sold out in days, Woodward tells me.

He’s also more confident in the long-term plan to plant the Bluebird flag on mountains across America, serving a burgeoning demographic ever more anxious to discover a new way to ski. “One of the great things about backcountry skiing is that it’s one of the few things you can do that’s naturally socially distant,” he says.