Fannie Mae (OTCQB:FNMA) and Freddie Mac (OTCQB:FMCC) are two companies that are regulated by the Federal Housing Finance Agency (FHFA), which is currently directed by Mark Calabria. Mark Calabria was nominated by President Trump because of his whitepaper regarding the legality of the net worth sweep in January of 2019 and became director of FHFA in April of 2019. Since being appointed Mark Calabria has raised their capital buffers to prevent Fannie and Freddie from sending cash dividends to Treasury so that they could be retained as capital and reworked the capital rule. FHFA has now released a new report that provides clues to what is about to happen, in a big way.

Investment Thesis: After more than a decade, FHFA is following its statutory obligation as conservator and preparing to finalize the capital rule. Once finalized, Fannie and Freddie must submit to FHFA capital restoration plans. With the Senior Preferred Stock Purchase Agreement currently taking 100% of the net worth of the companies above their current capital buffers, that needs to be dealt with before Morgan Stanley and JPMorgan can work with the companies to put together their capital restoration plans.

In the recently issued FHFA 2020 Performance and Accountability report, FHFA said that they “will finalize the regulatory capital framework for the Enterprises in early FY 2021.” The government FY 2021 year started October 1, 2020; so that is effectively right now. Once the capital rule is finalized, Mark Calabria’s next step is to review the to be submitted capital restoration plans put together by Fannie and Freddie with the help of their financial advisors JPMorgan and Morgan Stanley.

Because it is impossible to plan around raising capital when the government’s SPSPA agreement takes everything, that has to go before the companies can work with their financial advisors to figure out capital restoration plans. Once the capital rule is finalized, the financial advisors basically cannot do anything until Steven Mnuchin works with FHFA to do the SPSPA amendment. As such, I think we see the capital rule come out around the same time as the SPSPA amendment. I think an SPSPA amendment with a capital rule sends the junior preferreds to around 50% of par value. Commons may outperform them based on if the capital rule comes in lighter than as-is proposed. I expect junior preferreds to trade at par or more within a year.

Below is their independent auditor’s report showing when their fiscal year ends at FHFA: 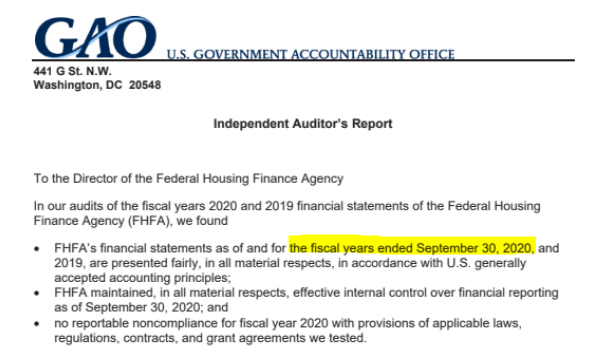 This is important because it means that the capital rule is expected to be finalized imminently.

FHFA talks about what it is going to take for Fannie and Freddie to leave conservatorship and that FHFA is going to be finalizing this next step (the capital rule) this fiscal year:

While responding to COVID, FHFA also continued to carry out the Agency’s statutory responsibilities. For example, in May, FHFA released a re-proposed regulatory capital framework for the Enterprises that is built on the lessons of the 2008 crisis. Meeting all the capital rule’s requirements will be essential to Fannie and Freddie becoming financially safe and sound. As discussed in this report, COVID caused the Agency to delay the release of the rule such that it will now be finalized in FY 2021. Finalizing this rule is a necessary step to ending the conservatorships of Fannie Mae and Freddie Mac.

FHFA talks about responsibly ending the conservatorships in the context of FHFA’s statutory obligation:

Responsibly ending the conservatorships, FHFA’s statutory obligation, will require the Enterprises to achieve safety and soundness. They must be well-regulated and well-capitalized so that once they exit, they never return.

FHFA talks about the rule that requires Fannie and Freddie to develop capital restoration plans:

In addition, FHFA plans to issue a notice of proposed rulemaking for the Enterprise capital planning rule to support sound capital management. The rule would require each Enterprise to develop and maintain a capital plan. The plan would assess the expected uses and sources of capital, by estimating revenue, losses, and capital levels over a defined planning horizon, under both expected and stressful conditions, including scenarios provided by FHFA and at least one scenario developed by the Enterprise.

It is impossible for Fannie and Freddie to develop capital restoration plans when the US Treasury has an agreement with the enterprises that prevents this by design:

Acting upon the commitment made in the Administration’s 2011 White Paper that the GSEs will be wound down and will not be allowed to retain profits, rebuild capital, and return to the market in their prior form.

As such, that part of the agreement needs to be modified with the help of Treasury Secretary Steven Mnuchin in order to assist FHFA’s statutory obligation of responsibly ending the conservatorships.

Given that the Senior Preferred Securities Purchase Agreement amendment would require Steven Mnuchin’s signature, it sure is interesting that Mnuchin was on a call with FHFA leadership on Monday:

Public Engagements Schedule for the Week of November 16 – November 22, 2020

I wonder if they talked about finalizing the SPSPA amendment. According to an article on Bloomberg, they have been working on the amendment for months:

It seems to me that this is all rapidly coming together and it is about to happen.

I own 7600 FMCCG, 550 FMCCH, 6658 FMCCI, 4663 FMCCL, 1560 FMCCM, 396 FMCCN, 3259 FMCCP, 600 FMCCS, 3700 FMCKP, 42805 FNMAP and 5 FNMFO. It would appear that we are on the cusp of a major equity restructuring that will help facilitate the largest capital raise in history around the middle of next year. Preferred have breach of contract claims that will survive this restructuring that I think will lead to conversion terms as part of clearing the capital structure in order to raise capital. I expect that common stock may have similar returns to preferred, but it is unlikely to outperform preferred because I think FHFA and Treasury have by design tried to prevent them from having what they rightly deserve.

The court system has been too slow and the goalposts have moved. Guarantee fees have been increased, the capital rule is setting the bar at a level that is in line with the companies being overcapitalized utilities, and despite there being suspicious backdoor accounting, there has been no restatement of the financials. At the end of the day, shareholder lawsuits will be part of what has saved Fannie and Freddie and along with them the equal opportunity 30-year fixed rate mortgage.

The cost of this conservatorship is largely being placed on people who carry mortgages by increasing their guarantee fees, as well as on common shareholders, which are basically getting diluted by the government warrants and the new capital rule which is bringing with it a mountain of new shareholders coming in and buying stock to recapitalize the companies. Thus, I figure the common shares are worth around $4-7. On the announcement of the finalization of the capital rule and the amendment to the senior preferred securities purchase agreement, however, I do expect the common to win the race up, as they usually do.