The Biden-Harris Administration: What We Think We Know, What We Need To Know 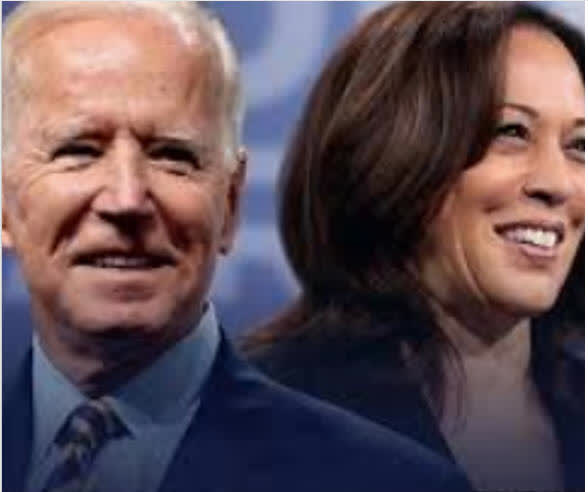 The Biden-Harris campaign is clear on the measures they intend to accomplish but silent on some of the biggest threats facing the economy – threats that could lead to political suicide if botched. In this article, I summarize what we know about the Biden-Harris agenda and then move on to the challenges facing this administration that we need to know about, but don’t. Please watch our video on this topic.

The following table summarizes the platform that Biden-Harris ran on. Most of these measures will be accomplished if Democrats win the Senate, but we won’t know until January, when two Georgia run-offs are settled.

Healthcare was the focal point of the election, with COVID-19 taking center stage. Unfortunately, the virus has mutated into a more contagious form, but thankfully, this mutation appears to be less deadly. President-elect Biden has made it clear that he will insist on mask-wearing and would not hesitate to shut down the economy if there is a major outbreak. But the really good news is that vaccines are on their way, and one or more might be available soon.

COVID-19 treatment appears to be on the horizon, but the economic aftermath will be with us for a long time. In particular, the economic relief that the government has provided and will provide is not free, although many recipients think it is. I discuss the potential consequences of “helicopter money” in the section below on the economy.

Beyond COVID-19, this country is paying dearly for its healthcare but is not getting the best, as shown in the following graphic. 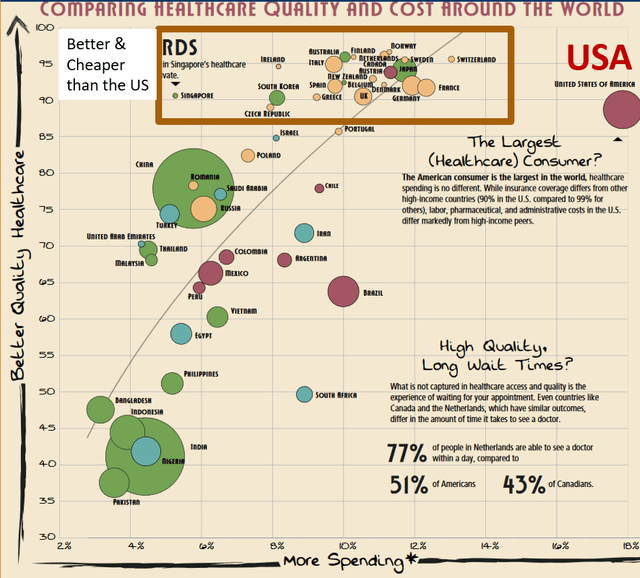 The size of the dots reflects the size of the population. Europe is shown in yellow, the Americas in red, and Asia in green. As you can see, USA pays the most for health care, but most European countries get higher quality. For example, many drugs can be purchased online from GLOBALRx for substantially lower prices than in the US. It’s been said that the US sponsors the research of drug companies.

READ ALSO  Gingrich: The Thieves Who Stole Our Election Got Sloppy

The Biden-Harris administration has vowed to address this problem and to develop some form of universal healthcare, probably based on President Obama’s Affordable Care Act (ACA).

The new administration will inherit some serious economic problems, including a world debt crisis, bubbles in stock and bond prices, and social unrest created by a growing wealth divide. I discuss each in the following.

“Per Capita World Debt Has Surged To More Than $200,000” is one of my most-read articles. Its manifestations are summarized as follows:

An example of how the world got into this mess can be seen in the liability for Social Security and Medicare in the US totaling $76 trillion, and prompting commentators to predict that these very important programs are going broke – first Social Security in 2026 and then Medicare in 2034.

But Modern Monetary Theory (MMT) advises otherwise: these programs will not go broke, because the government will simply print more money – problem solved. Money is currently “printed” when the Treasury issues new debt, but the usual buyers – foreigner and US citizens – aren’t buying, so the Federal Reserve is buying most of the new debt. MMT cautions that this printing could cause inflation, in which case the new money needs to be reined in with taxes. Will Congress have the political will to “unprint”? Quantitative Easing (QE) of $4 trillion did not increase inflation as measured by the CPI, but it did add to the inflation of the bubbles in stock and bond prices, as discussed below.

The newest round of printing is for COVID-19 relief and is $3 trillion, with another $3 trillion likely. This money will move the CPI meter because much of it is going to people who are using it to buy groceries and pay rents. This has led to an ongoing debate about inflationary versus deflationary forces. As shown in the following picture, some level of money printing is likely to weigh the scales toward inflation, although deflationary pressures are the current winners. 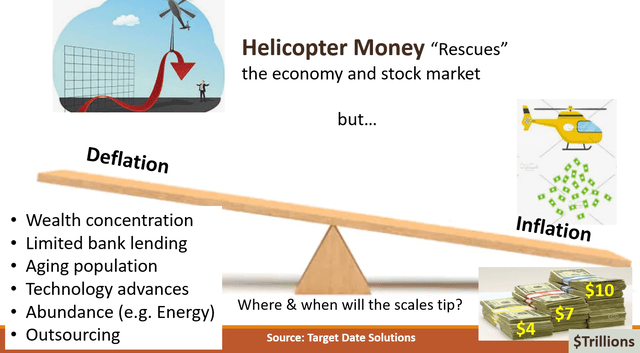 One of the “cures” for excessive debt is to not pay interest, so the Federal Reserve and other central banks have engineered ZIRP: Zero Interest Rate Policy. Bond yields are being manipulated by paying too much for them – a bubble.

Stock prices are also excessively high, but there is disagreement about how “expensive” is defined. Price/earnings ratios are currently exceedingly high by historical standards, but defenders of current prices say these prices are justified by low interest rates, since future earnings are now being discounted at lower rates. This is partially true. Lower rates should have increased stock prices by 50% in the past decade, although prices actually increased 250%. Also, the troubling part of this observation is that bursting of the bond bubble will domino a bursting of the stock bubble, to the tune of about 50%.

Warren Buffett developed a measure of bubble detection that has successfully predicted market crashes. It’s the ratio of the value of the stock market to GDP. The norm is 80%. Excesses well above 80% are a bubble. As you can see in the following picture, the stock market is currently 220% into Bubble Land, which is 275% of the 80% norm. 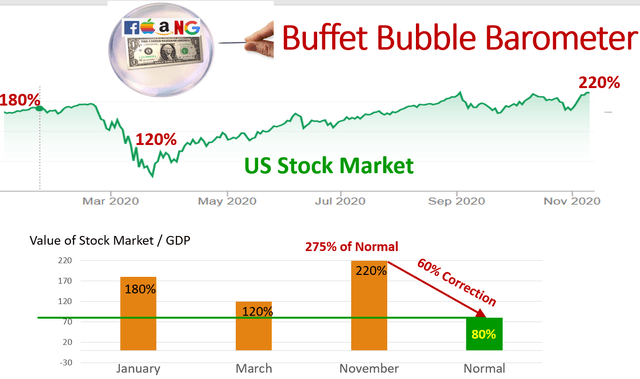 When the stock market reacted to COVID-19 in February with a 35% decline, many viewed it as “the match that lit the overvaluation tinder.” But the subsequent recovery took the Buffett ratio even higher, from 180% at the start of the year to 220% currently. The bubble continues to inflate. Everyone knows that bubbles cannot inflate forever.

The run-up in stock prices has exacerbated the wealth divide – the rich have gotten even richer, making the poor even madder.

READ ALSO  What The COVID Vaccine Hype Fails To Mention

The top 10% of wealthy people in the US own 68% of the wealth. This concentration of wealth has given support to socialistic reforms. The other 90% want more of the wealth in this country.

The bursting of the stock and bond market bubbles will solve part of the problem, since much of the wealth is held in securities, but this won’t make the 90% any richer, and their 401(k) savings will suffer. Riots disguised as “protests” will likely continue. It’s like the Russian Bolshevik revolution in the 1920s. The rich are simply outnumbered, although they might be able to pay for protection. The cries to “Defund the Police” are transparent attempts to remove this protection option from the rich.

The current election fraud controversy is fanning the flames. If proven, the US will become a different country. We don’t trust the media to be unbiased, so whom do we trust?

The Biden-Harris administration faces serious problems that will be hard to solve. Investors should be prepared for the possibilities of serious inflation and crashing securities prices. Don’t shoot the messenger – I’m just identifying the threats. You are the judge of my views. I hope I’m wrong. Prestigious firms like Goldman Sachs and others predict a rosy 2021, although some see this as overly optimistic. Can investment management firms afford to worry publicly?

For some guidance on protection, see “How to Minimize the Impacts of Inflation, Recessions and Stock Market Crashes.”