The Best Way To Invest In The Energy Sector In 2020

A record number of energy companies filing for bankruptcy coupled with poor performance by the industry in 2019 has made it incredibly hard to find investments in the energy space that can be considered safe or promising.

The industry’s favorite benchmark, the Energy Select Sector SPDR Fund (XLE), which tracks the price and yield performance of companies in the energy sector, has returned just 2.7% compared to the 24.2% produced by the S&P 500 year-to-date, easily one of the biggest laggards in the entire market.

Faced with this worrying trend, it’s easy to give up on the sector altogether or feel tempted to short it to the death – both of which would be decidedly short sighted reactions to a struggling energy market.

But first, let’s look at some popular energy instruments that have turned quite risky for the average investor.

Many investors tend to turn to bonds when the stock markets become choppy.

After all, bonds offer a relatively safe payout with companies obligated by law to pay out any cash owed to bondholders before they pay stockholders. A company must pay any interest on its bonds or else they go into default and allow the bondholders to garnish the company’s assets.

More adventurous investors with a higher risk appetite prefer junk bonds for their juicier yields.  Related: The U.S. Just Became A Net Oil Exporter For The First Time Ever

Interestingly, Bloomberg has reported that energy junk bonds are the worst performing junk bonds out there, yielding 5.3% compared to a tantalizing 16.7% yield by junk bonds from the banking sector. 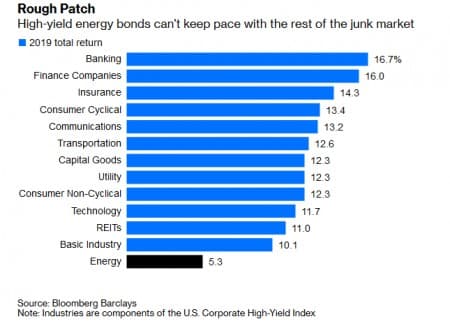 This could be due to lackluster demand as investors increasingly shun debt-ridden energy companies. 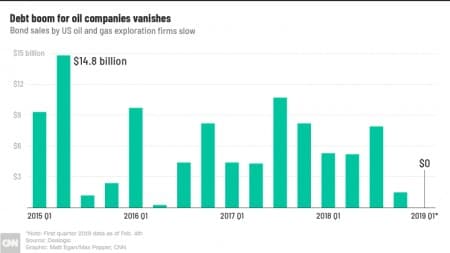 Well, a 5.3% yield doesn’t look too shoddy compared to many alternatives. If anything, it’s about double what the average stock has returned in the energy space so far in the year.

However, it’s important to bear in mind that in August, Fitch ratings showed that junk-rated bonds by energy companies were defaulting at a rate of 5.7%, the highest clip in two years.

That’s hardly surprising considering the high levels of debt in the industry, particularly by shale companies that expanded too aggressively during the shale boom. Industry stalwarts such as Sanchez Energy and Halcon Resources have already filed for bankruptcy, bringing the sector’s total to 26 as of August.

Shale companies have started offering a new type of asset-backed bonds they have dubbed “shale bonds”. Case in point is Raisa Energy, which debuted the industry’s first shale bond in September.

While asset-backed bonds might be deemed safer than standard corporate bonds, they still carry a considerable risk because the wells that back them might end up yielding well below projections.

If you plan to invest in energy bonds, the safest route to take is to focus on reputable companies with a high credit rating. Moody’s has lately been downgrading even the oil majors right, left and center – so, do your homework first.

With oil prices remaining stubbornly low, the temptation to short the commodity can be overwhelming.

Inverse/Short Oil ETFs provide the opposite daily or monthly return of various oil-based natural resources. These funds usually invest in a single commodity or several commodities such as Brent/WTI, gasoline and heating oil. Some of them are leveraged, which can magnify profits or losses.

So, how well have inverse oil ETFs performed?

According to data by ETFdb, all the top 7 inverse oil ETFs are deeply in the red with leveraged ETFs being particularly badly hammered. 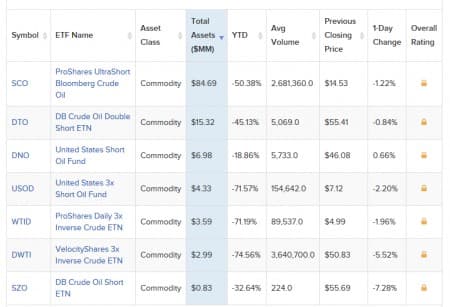 Lesson learned: If you want to play the shorting game, it’s advisable to focus on individual companies.

That said, the EIA has forecast that crude oil prices will be lower on average in 2020 than in the current year mainly due to rising global oil inventories, particularly during the first half of 2020.  Related: Shale’s Debt-Fueled Drilling Boom Is Coming To An End

If things pan out this way, shorting oil might actually pay off during the first half of the year.

Shorting oil has generally not worked well in the current year. Generally, ETFs that directly track oil prices have done surprisingly well. These include:

This index fund is based on the value of WTI futures contracts with 100% of its net assets in WTI crude oil futures.

CRAK attempts to replicate the performance by the MVIS Global Oil Refiners Index, essentially meaning it tracks the performance of companies involved in crude oil refining.

READ ALSO  Xi Warns Party Officials: Anyone Who Covers Up Coronavirus Will Be "Nailed To Pillar Of Shame"

Given the somber outlook for the oil sector in 2020 by the EIA, shorting these 3 ETFs might be a better strategy than playing the long game.

The EIA expects WTI to have another rough year, with prices averaging $5.50/barrel less than Brent prices in the coming year.

Nowadays, when talking about high-quality energy stocks, most experts usually refer to defensive stocks that can withstand the market downturn without too much capital erosion or those with minimal risk of going under.

It’s worth noting that although Moody’s downgraded XOM’s credit outlook to Negative from Stable due to its high capex, it maintained the firm’s AAA credit rating, citing its vast reserves.

Investors should hunt for companies with similar credentials.

If you are one of the many environmentally conscious investors who would like to join the growing Environmental, Social and Governance (ESG) drive, consider investing in green or climate bonds. These are bonds offered by governments or companies for investment in renewable energy, water, green buildings (energy efficient buildings), and even agriculture.

Billions of dollars have been pouring into green investments as they increasingly move to the mainstream. Two of the leading green bond ETFs are the VanEck Vectors Green Bond ETF(GBRN) and the iShares Global Green Bond ETF (BGRN).

By Alex Kimani for Oilprice.com