Home Financial news The Behind the Scenes Work of Union Bosses is About to Destroy Freelance Work in California
2019-10-282019-10-28By finanz.dk 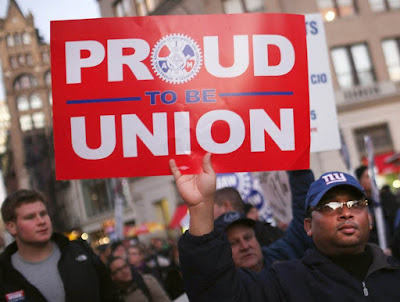 The new law was pitched as a simple measure to provide contract workers with benefits like sick leave and health care. Yet as the dust clears, many ugly details are emerging. There were lots of carve-outs: for doctors, lawyers, accountants, psychologists, insurance agents like Jake from State Farm. But here’s something weird: Freelance journalists are limited to 35 submissions a year per “putative” employer.

Thirty-five submissions are very low. A freelancer working for a blog may write more than one piece a day, never mind less than one a week.

The author of the law is a former labor organizer, Assemblywoman Lorena Gonzalez, who you can bet had union help in writing the thing—it’s easier to organize employees than freelancers. Ms. Gonzalez told the Hollywood Reporter her goal is “to protect and preserve good jobs. We’re trying to create new good jobs and a livable, sustainable-wage job.”

And the 35 number? Ms. Gonzalez suggests that a “weekly columnist”—that cuts eerily close to home—amounts to a part-time employee, so she capped freelancers to about 25 submissions a year. When freelance writers protested, she lifted it to 35. She explained, “Was it a little arbitrary? Yeah. Writing bills with numbers like that are a little bit arbitrary.”

You will find union bosses trying to change the rules wherever workers are difficult track or income is difficult to track. That’s also behind the anti-tip movement. They want worker income that was formerly tips to be tracked.

READ ALSO  Free exchange - What is the link between economic crises and political ruptures? | Finance & economics

Tracked workers and former tip income is a lot easier for unions to tag on their union “membership” fee.

The law was aimed at Uber and Lyft drivers. Yet now scriptwriters, actors, housekeepers, gardeners and many other types of contract workers will have their livelihoods threatened by Sacramento saps.

Well, not exactly saps. It is how the political set always operates. They vote with those that take care of them. Unions, like others close to power, take care of politicians.

The only solution is to shrink the power of government as close to zero as the masses will stand for.  Otherwise, politicians will use their power to grant crony coercive favors and hurt the general public.