The Art Of A Successful Contrarian Investor

Saying you are a contrarian investor sounds cool. Being a consistent contrarian is a different story. A much tougher and darker story, as we will show below. One might imagine oneself like a sort of film hero, going against the tide, fighting against the enemies and overcoming the obstacles on the way. Yes, a little bit of sacrifice, but totally worthy given you are doing what’s right and victory is awaiting.

The reality of the contrarian investor has some parallels to this, no doubt, but the struggle part – mainly intellectual, but it may even reach the physical as well – is ten times more prevalent, while the victory part is only an expectation that may never come to fruition in the worst-case scenario.

It’s usually said that contrarian value investors look to be wrong most of the time, only to be proven right all of a sudden. Long periods of underperformance may be offset by short periods of huge relative returns. That’s not easy to deal with. Looking like you’re wrong for a long time before Mr. Market, your peers, your friends, and/or your clients is difficult, even more so when the moment for celebration may be too brief and there will have very likely been mistakes along the way that restrain your joy (full satisfaction never exists).

But what exactly is being a contrarian investor? What does it really mean? Let me use a few quotes by great investors that I think define contrarian investing much better than I could do it in my own words.

Peter Lynch wrote the following in his book One Up on Wall Street:

Some have fancied themselves contrarians, believing that they can profit by zigging when the rest of the world is zagging, but it didn’t occur to them to become contrarian until that idea had already gotten so popular that contrarianism became the accepted view. The true contrarian is not the investor who takes the opposite side of a popular hot issue (i.e. shorting a stock that everyone else is buying). The true contrarian waits for things to cool down and buys stocks that nobody cares about, and especially those that make Wall Street yawn.

Mike Alkin, Chief Investment Officer and Founder of Sachem Cove Partners, LLC, a hedge fund focused on the uranium mining and nuclear power sectors, told me in an interview how he felt as an investor:

I am inherently a contrarian. I have always gravitated to companies that have been out of favor on the long side and overly popular when looking at shorts. That fits my natural being – I am a skeptic and typically not one to join crowd-thinking.

I have always been contrarian, but over the years, and from the lessons learned from those great investors, I learned that being contrarian for the sake of being contrarian is not a sound investment philosophy. Often times consensus is right and stocks are priced about right. It requires peeling the onion back many layers to determine if consensus is right or wrong. Finding either real value on the long side or a compelling short idea is not easy.

I also learned that a deep-value long can stay cheap for a long time and that you must identify catalysts to unlock that value. Same on the short side. Never short a stock because you think it is expensive. Stocks can stay expensive for a long time. I should not be so bold to think I can determine what someone else would be willing to pay for a stock. It’s important to identify the catalyst that would cause a bull to want to exit the position.

And the last of the quotes on being a contrarian is by best-selling author Michael Lewis in his book Liar’s Poker (that I got via Macro Ops here):

Everyone wants to be, but no one is, for the sad reason that most investors are scared of looking foolish. Investors do not fear losing money as much as they fear solitude, by which I mean taking risks that others avoid. When they are caught losing money alone, they have no excuse for their mistake, and most investors, like most people, need excuses. They are, strangely enough, happy to stand on the edge of a precipice as long as they are joined by a few thousand others…

Yes, I said at the beginning, it sounds cool to say you are a contrarian investor and quote Howard Marks or other legends in the investing world about how you have to deviate from the majority to beat the market. But doing it well is very different, as the past few years have shown.

Take, for instance, the huge rally of the U.S. tech sector, not only this year but in the past decade. According to the Bank of America’s July fund manager survey, 74% of fund managers found U.S. technology and growth to be the most crowded trade, the highest level ever in BofA’s monthly survey. A contrarian investor might want to avoid this sector at all costs. But let’s see what’s happened in the recent past: 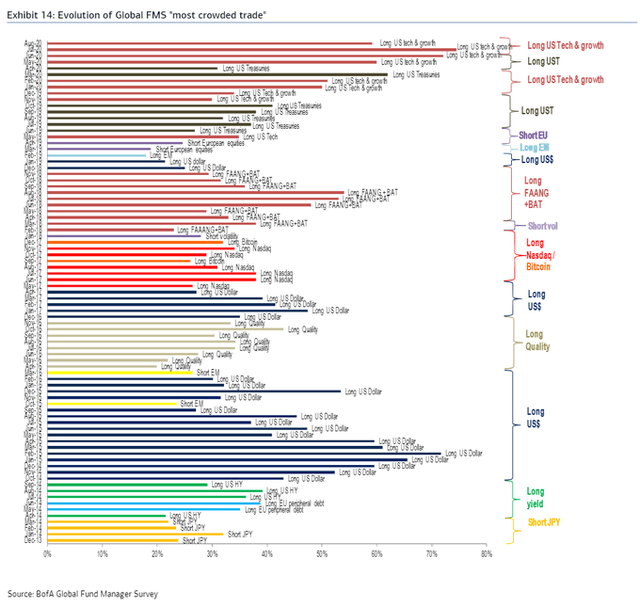 As you can see, the long tech trade has been one of the most crowded trades since 2017, and yet, the sector has outperformed the overall market by a big margin. This has also happened with other cases, such as the overweight positioning in U.S. stocks, which have trounced global stocks. In contrast, so-called contrarian plays such as European or UK equities, or above all Energy stocks, have greatly underperformed despite being the most hated asset classes for a long while. This hasn’t been only a short-term (6-12 months) thing, but it has lasted for several years now. Contrarian value investors haven’t done very well in general.

One of the contrarian bets of recent times has been the long commodities trade. No wonder, as it’s been the worst asset class by far in the 2010-2019 period, as the chart below shows. And some claim it’s currently at the lowest point in history compared to the stock market. 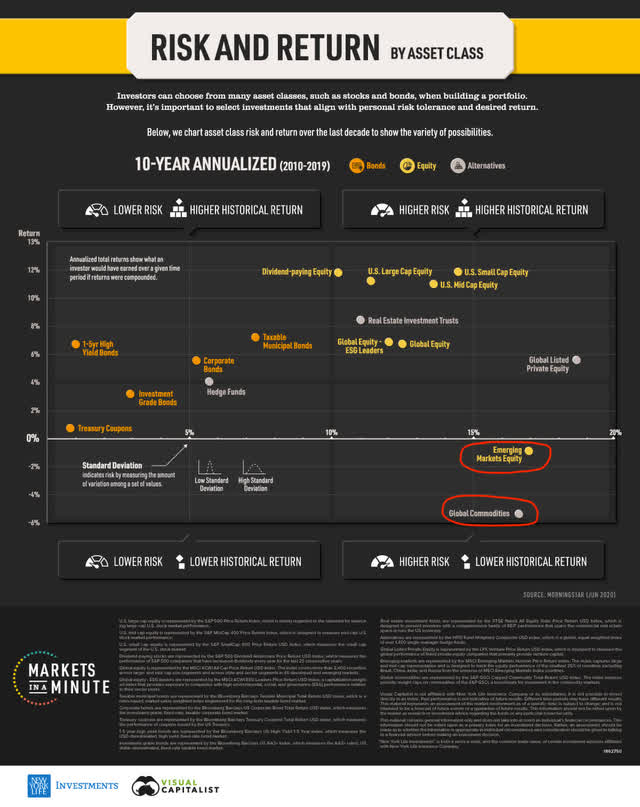 While some parts of the commodities complex have shown big gains lately (such as precious metals), no one can argue it’s still being a painful trade, particularly in oil and energy-related equities. I myself wrote a piece at the end of 2019 making my bullish case for the oil sector in 2020 and beyond here at Seeking Alpha, but it’s failed miserably – whether it is because of the dual shock the coronavirus brought or for other reasons is another matter. And even Peter Lynch himself, in his Barron’s interview in December 2019, hinted at the attractive opportunities arising in energy-related sectors, which checked many, if not most, of the boxes to be considered as contrarian bets in his own definition seen above.

I’ve personally been somewhat playing this long commodities trade in recent times, though my involvement is mainly in the uranium sector – a very niche, small and overlooked sector where I see a lot of upside and a very strong and robust investment thesis. I don’t want to get into the details of this here; I have previously interviewed Brian Laks and Mike Alkin on Seeking Alpha, which gave an overview of the thesis.

What I want to reflect upon here is the contrarian nature of this bet and how difficult it is for a retail investor to do it properly. Here, the experience and skills of long-time professional investors come into play to help navigate the turbulences and volatility. This is why I titled this article “The Art of a Successful Contrarian Investor”. Mike Alkin, in a recent interview with SmithWeekly, put it best, talking about the uranium bull thesis and the way to play it:

This is a 3-5 year time horizon… if it’s not obvious yet, if the market is still working off first order thinking and not second order thinking, I’m not gonna heavily overweight something and just sit there, I’m gonna watch how it evolves and then start to deploy more capital as the market starts to adapt to it and starts to get comfortable with it. And then, we will be there early, but start to deploy more capital into it as the fundamentals start to become more and more obvious. It’s just a little bit of the art of positioning the portfolio.

I thought this was a gem and something investing pros know well (even if most of them don’t execute it well) but most of us don’t know and/or do well. It’s something that would have certainly helped me better navigate these volatile markets. It’s a way to minimize the negatives of being early in a contrarian trade. You have to respect the market and take into account the market participants’ views. While we have often heard the phrase #ViolentUpside and that these types of markets may wake up one day with a huge rise, that may not be the best risk management strategy.

Another related quote that reinforces the previous idea I’d like to use to end this piece is one by Harris Kupperman (“Kuppy”) regarding uranium from a year ago:

I’ve been playing in commodity markets for two decades now. If there’s one constant, it’s that these things take longer than you think to play out. This is because there’s always more stockpiled inventory than expected and commodity users always find ways to make their own stockpiles last a bit longer, rather than paying up for supply as the bull market first begins—even though paying up a few percent is better than paying up a few hundred percent later on. These bull markets are all the same in that regard. The market is already getting tight, now we need some unforeseen event to tip the balance into a bull market.

A famous quote by the economist Rudiger Dornbusch comes to mind: “In economics, things take longer to happen than you think they will, and then they happen faster than you thought they could.”

The final sentence of Kuppy’s quote couldn’t be more relevant now. That “unforeseen event” may have been the COVID-19-induced pandemic and its huge impact on uranium supply, so I’d say that finally the bull market in the uranium sector seems to be starting. But that’s not the core of my article, which is more about the art of how to position into and play a contrarian trade.

Disclosure: I am/we are long URANIUM STOCKS. I wrote this article myself, and it expresses my own opinions. I am not receiving compensation for it (other than from Seeking Alpha). I have no business relationship with any company whose stock is mentioned in this article.