The Ant Got Crushed, Buying Opportunity For Alibaba (NYSE:BABA)

Alibaba Group (BABA) was having a bullish setup ahead of three major catalysts: i) the upcoming IPO of Ant Group which is slated to be the world’s largest-ever and with its valuation revised upwards heftily in the prelude to the price-fixing, ii) the largest annual shopping extravaganza with the climax on November 11, iii) the potential earnings beat for its second-quarter fiscal year 2021, aided by the strong Chinese currency.

Alibaba’s share price was also on an uptrend as I charted in my previous article titled Alibaba’s New Target: $480 By End-2021. The price movements of Alibaba which began in early 2019 are reminiscent of its trading pattern in 2015-2018. I argued that if the share price movement indeed pans out like in the past, Alibaba could reach for greater heights (~$400 in early 2021), suffer some correction, and then shoot for the $480 resistance by the end of next year. 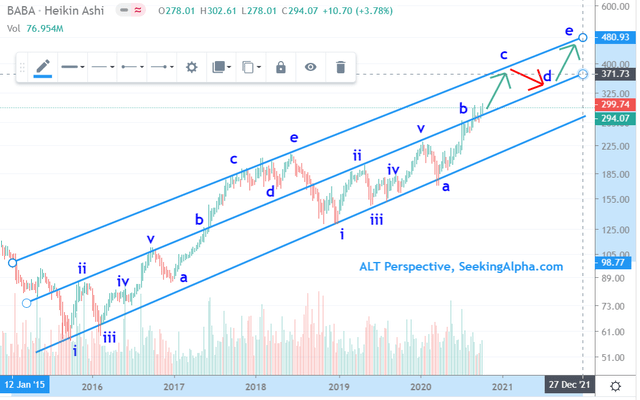 All these loudly flashing buy signals are facing doubtful investors today as Ant Group, the fintech unit of Alibaba, announced the suspension of its blockbuster IPO in both Shanghai and Hong Kong. This resulted in an 8.1 percent plunge as of Tuesday’s market close to $285.57, not too far off from the $299.74 price when I drew the above chart last month. Hence, the above setup may still be intact.

Is the plunge today just “noise” when we look back a month or even a year later? Were the issues leading to the suspension of Ant Group’s IPO fundamentally damaging? Let’s explore.

The supposed trigger for the authorities’ actions

The suspension of Ant Group’s IPO was neither due to some shenanigans discovered at the fintech arm itself nor at Alibaba Group as several readers alleged. Rather, it was due to the release of draft rules (link in Chinese) stipulating tightened online microlending standards.

As a result, the Shanghai Stock Exchange [SSE] declared in a statement to Ant Group: “Due to the material matters reported, your company may no longer meet the conditions for offering and listing, or the requirements for information disclosure.” As simple as that. The rules changed so the IPO prospectus has to be updated.

If there has been anything suspicious or plain wrong about Ant Group, the two exchanges would not have approved its IPO at unusually fast pace especially for the mega-sized listing it was supposed to be. The Chinese government would not have waited until trillions of dollars ($3 trillion from retail investors alone) have poured in by applicants hoping to grab a piece of the action.

Of course, coming just days ahead of the listing, the question on everyone’s mind was, what triggered the move? Pundits generally blamed the co-founder of Alibaba and Ant Group, Jack Ma, for his blunt remarks made during The Bund Summit 2020 held on October 23-25 in Shanghai. 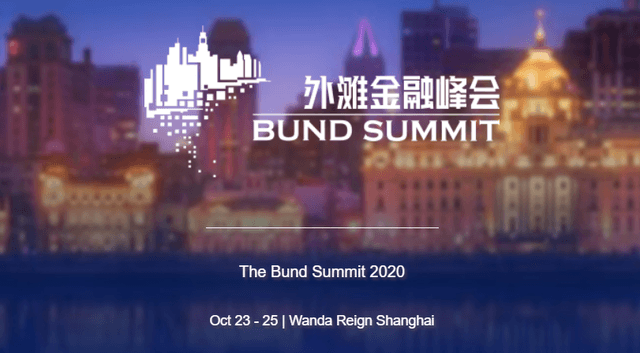 Ma was on the offensive during his October speech, calling the global banking Basel Accords as an “old people’s club,” and declaring China’s greatest risk was the lack of a “financial ecosystem.” Mincing no words, he also blamed “outdated regulation” as hampering innovation in the financial sector.

Were regulators so “thin-skinned” that they were angered by Ma’s admonitions? Perhaps not. After all, terms that he used, like labeling Chinese banks as “pawn shops”, were uttered by others before him, including authorities at the People’s Bank of China themselves. A Bloomberg Opinion piece also mentioned that “the new draft rule is just a continuation of the debate” which began in 2017 on “whether to allow online microlenders to take a simple loan facilitation model or require them to put away loan provisions.”

It’s probably as what my Chinese friends often say “树大招风”, literally meaning that the larger a tree grows, the more wind it would encounter. It’s a proverb implying that a person invites more trouble as he grows in stature. It can also be used on organizations. This proverb rings true for both Ant Group and Jack Ma, with the latter firmly perched on China’s rich list with the ballooning in the valuation of his holdings.

It was only in July when Colin Huang, the founder of e-commerce player Pinduoduo (PDD), was in the limelight for his rapid climb to become one of China’s richest of the rich. He astutely stepped down as the chief executive officer and claimed to “give away” a significant part of his shares.

Nobody doubts Huang would continue to hold the decision power with his (still) vast ownership and voting shares in Pinduoduo. Nevertheless, his maneuvers appeared to have worked as he was left alone since. We cannot say the same for Jack Ma who deemed to be politically savvy but seemed to have let down his guard recently.

Furthermore, the mind-boggling figures coming out from Ant Group’s IPO must have caused the bureaucrats to sit up and see how they could reduce the risks before the fintech giant becomes uncontrollable. Rivals in the industry, particularly the traditional banks, could also have raised the alert levels among the officials and urged the authorities to make the rules stricter for the fintech firms to level the playing field or maybe, in the name of risk reduction. 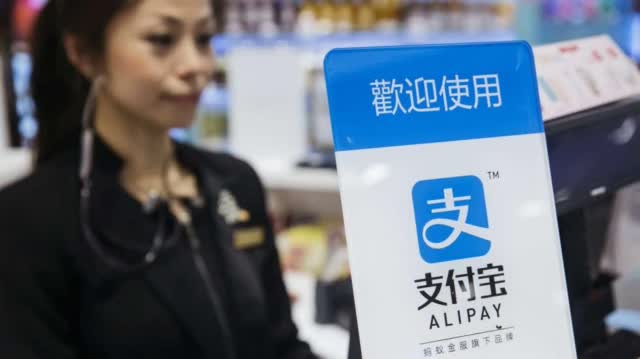 A key change laid out calls for licensed online microlenders to fund at least 30 percent of any loan they make jointly with financial institutions. That is a huge gap from Ant Group’s current practice. Its licensed nonbank financial subsidiaries contributed a mere 2 percent of the credit balance, as of the end of June, according to its prospectus.

Bridging the difference could severely crimp Ant Group’s prospects with online lending being a major driver of revenue and profit. The prospectus revealed that the online lending segment was 39.4 percent of its total revenue in the first half of 2020. That exceeded 35.9 percent of revenue contribution from the ubiquitous digital payment business during the same period.

Unlike many newly listed tech firms, Ant Group is already highly profitable. However, this is moot as investors look to the future. The revised rules would reduce the profitability Ant could make and in turn reduce the valuation it could fetch.

What to make of this?

Prior to the sell-off in Alibaba, Bloomberg reported that the shares of Ant Group were trading at a hefty 50 percent premium in the gray market. This was despite the negative publicity in the past few days in the Chinese state media admonishing Ant Group for “straying from its core payments business” and goading users to “consume beyond their means”.

That bullishness also came after Jack Ma, together with Ant Group’s executive chairman Eric Jing and CEO Simon Hu, was summoned to a rare joint meeting on Monday with the country’s central bank and three other top financial regulators. In other words, should the media been reporting favorably on Ant Group and there was no Monday meeting with the authorities, investors could have bid up the stock even higher!

To be clear, the new rules are not targeted only at Ant Group – they are applicable to the entire industry. Lufax Holdings (LU), which operates a personal financial services platform in China and provides loans “for small business owners and salaried workers for small business operations and personal consumption”, saw its stock plunge 9.4 percent, worse than Alibaba. Tencent Holdings (OTCPK:TCEHY)(OTCPK:TCTZF), which also has a fintech arm made famous by its WeChat Pay, shed 3.2 percent.

Now, regular readers would recall Tencent suffered from a serious regulatory blow in its games back in 2018. The government launched a surprise crackdown on addictive and gory games. Shareholders of Tencent were spooked when regulators canceled the license for its “Monster Hunter: World” game just days after its launch.

Although Tencent is well known for its ubiquitous messaging app WeChat, its bread-and-butter business is gaming. Thus, government intervention on its core business was a huge concern. Tencent recognized the deep challenge and announced its third company-wide reorganization since its founding.

I wrote in an article Tencent: Third Restructuring, Third Time Lucky? suggesting that “the prevailing ugly episode provides long-term investors with the opportunity to add on to their positions in Tencent.” Since then, TCEHY has a total return of 90.5 percent as compared to the 15.4 percent achieved by the S&P 500. 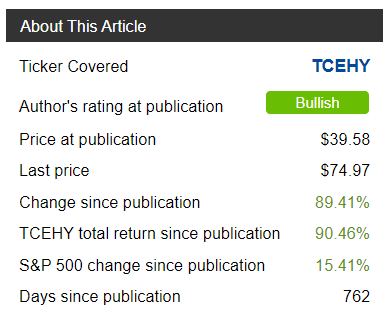 In a later article, I argued that Tencent would be able to better navigate the stricter rules for game approvals than its smaller peers. Furthermore, those who might be unable to adjust their revenue model to suit the harsher rules could exit the market, leaving Tencent with a larger pie.

Likewise, regardless of how the fintech regulatory environment is going to shift, Ant Group as the pioneer and proven leader is expected to weather the storm better than the others in the industry.

Jack Ma’s blunder in opening his big mouth a few days early is history. He doesn’t live on regrets. We shouldn’t too. The Chinese government has signaled Monday’s move won’t be the last. A larger crackdown is on the horizon.

However, we should bear in mind that Alibaba was already trading in the $280s level when the valuation of Ant Group was touted at around $250 billion. Ignoring the 50 percent premium ($465 billion) the stock was fetching on Tuesday in Asian trading hours, the IPO price of Ant Group still meant it was valued at $310 billion, some $60 billion higher than early October.

Are the announced change and future amendments to the regulation causing a $60 billion (or $465B-$250B=$215B) hit to Ant Group’s valuation fair? If not, the plunge in Alibaba’s share price on Tuesday seemed excessive. Alibaba is down less than 7 percent for much of the day on Wednesday trading, lower than the 8.1 percent decline during the U.S. session.

This implies that market players are reacting to the news and the overnight fall in Alibaba’s ADRs. However, despite the threat of further actions by the regulators, the Hong Kong shares are down less than the amount suffered in the U.S. trading. This suggests that there could be some over-reaction by American investors.

We should also not be blind to the good news on Ant Group. Reuters reported hours ago that the Trump administration would suspend efforts to blacklist Ant Group to avoid “legal action or cause a chill in markets.” The Chinese government probably does not want to spook the domestic stock markets as well, especially with the pandemic still raging economies globally, depressing the already weak sentiment.

Investing is never easy and straightforward. It is not without risks. However, as the Tencent example showed, the industry leaders can thrive on adversity and a tougher regulatory environment. With no direct or simple investment route to the IPO of Ant Group (dual-listing in Shanghai and Hong Kong), foreign investors would look to Alibaba as a proxy.

Thus, the plunge on Tuesday could be a buying opportunity. Investors could come to realize the sell-off was overdone. In addition, the reinstatement of Ant Group’s IPO would be a strong catalyst for Alibaba’s share price.

What is your take? Share your thoughts with the Seeking Alpha community in the comments field. If you like this article, click on the “Follow” button and make sure the “Get email alerts” is checked so that you will be informed of my next article the moment it’s published.

Disclosure: I am/we are long BABA, TCEHY. I wrote this article myself, and it expresses my own opinions. I am not receiving compensation for it (other than from Seeking Alpha). I have no business relationship with any company whose stock is mentioned in this article.

Additional disclosure: I may initiate a long position in Lufax over the next 72 hours.