A series of protests have taken over the streets of the Algerian capital, provoked by the Parliament’s decision to approve the country’s long-mooted hydrocarbon law. The hydrocarbon law, despite reportedly being ready from December 2018, has played into popular fears that Algeria’s bountiful resources would be taken over by rapacious Western majors. At first glance, this might mark an especially ill-timed decision as Algeria readies for its first post-Bouteflika elections on December 12, whilst it remains unclear whether the Algerian army might prove willing to cede control over the country to an opposition candidate. But is the hydrocarbon law actually that bad? Shouldn’t protesters demand a more ambitious bill instead?

The answer depends on the perspective, as always. Protesters in the streets claim the hydrocarbon law would result in Western majors squeezing out even more money from Algeria and that a military-backed caretaker government had no authority to push it through the parliament anyway. The opposition depicts the proposed amendments as remnants of the Bouteflika era – in a way they certainly are as it was Abdelmoumen Ould Kaddour, the recently sacked CEO of Sonatrach, who initiated the reform drive. Ould Kaddour happened to stir up popular fears about a foreign takeover of Algerian subsoil riches – an MIT-graduate, having worked for the Algerian JV of Halliburton for years, convicted for espionage in the mid-2000s (for the United States), happens to buy Exxon’s Augusta Refinery for $2 billion less than a year into his tenure? Seems fishy.

At the same time, there is no denying that Algeria needs foreign assistance, be it financial investment or state-of-the-art technology to bounce back from the soul-sapping stagnation of the past years. Extending the playing field for oil majors is by default perceived with suspicion, yet there needs to be someone who can break this spiral of distrust – one can hardly doubt the necessity for Algeria to break the impasse it has created. Oil and gas accounts for 96 percent of exports and roughly 40 percent of government revenues, yet both are stagnating and see their possibilities shrink due to ever-increasing domestic demand. 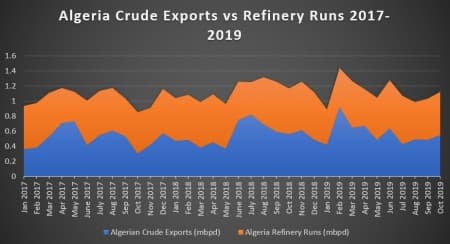 Algeria’s currency reserves have dropped by almost 60 percent since 2013 and with a budget deficit of 15-16 percent this trend is bound to continue, despite the government’s alleged readiness to tap into long-term loans. In a situation like this, the caretaker government is ideally suited to be brave – if the reform initiatives fail (the same day as the Hydrocarbon Law the Finance Bill was also approved, flaunting the idea of waiving the 51/49 ownership rule in non-strategic sectors, effectively allowing foreigners to own Algerian firms, i.e. without the mandated participation of a domestic majority owner), the army can still step in to rein in popular dissent. Let’s look at the three key novelties of the proposed Hydrocarbon Law.

The new hydrocarbon law, still to be approved by the Lower House and the Senate, extends the possibilities for companies eager to invest in Algeria’s energy sector. By means of bringing back production sharing agreements, the law amendments essentially bring Algeria back to pre-2005 times (the 2005 hydrocarbon law amendment eliminated PSAs as an option, further aggravated by President Bouteflika’s 2006 presidential order that reduced the playing field for foreign investors to the maximum). Thus, from now on Sonatrach’s partners have a wider choice – risk contracts, participation contracts and PSAs. Yet the draft law fails to perform when it is needed the most as the Algerian Council of Ministers kept the 51/49 participation rule intact, keeping all projects under the majority control of Sonatrach.

The 51/49 rule will continue to apply in the midstream and downstream sectors, too, even though some relaxation is manifest in Sonatrach being able to provide third-party access to its 100% owned pipeline system. The case for eliminating the 51/49 rule might not seem self-evident if one lives in Algeria but it is definitely clear-cut if one is to look at the wider picture (Algeria being the only African major producer to mandate NOC majority). There are several categories in which Sonatrach is lagging behind. Despite considerable shale wealth, its development has been snail-paced. Algeria does not produce any hydrocarbons from its offshore (adjacent Libya’s offshore projects are generally considered the safest) – Total has embarked upon a seismic survey of the North African country’s Offshore West block, however given substantial water depth levels the cost of drilling ought to be sweetened.

Restrictions on foreign participation were not the only cause of the tangible degradation in Algeria’s long-term prospects (in the past five years the average discovery size amounts to 9MMboe, roughly a third of what it was in the 2000s), taxes played their part, too. Companies operating in Algeria had to pay the monthly proportional royalty and petroleum income tax, the annual surface tax and additional income tax, land tax, gas flaring taxes, water tax, CO2 emission tax and a 1% transfer tax in some cases. No wonder the proposed Hydrocarbon Law amendments seek to simplify the country’s burdensome tax regime, all the while cutting the taxation burden on Algeria’s nascent shale and offshore segments. 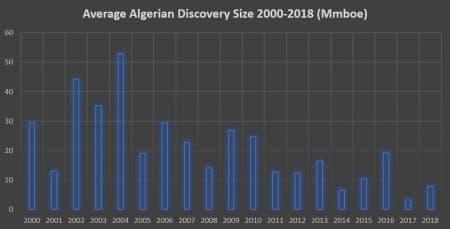 No wonder Algeria’s past attempts to attract foreign investment turned out to be so dire – take, for instance, the 2014 licensing round which saw only 4 blocks awarded out of a total of 31. Interestingly enough, the continuing Sonatrach monopoly and high taxation rates did not lead to a decrease in aggregate exploration wells spudded over the years – in fact, since 2014 the number of exploration wells hovered around 100, significantly higher than the early 2010s’ average of 60-70 wells. Yet there is a catch to it – exploration wells drilled in cooperation with foreign partners have all but disappeared, even though just a couple of years ago Sonatrach routinely spudded 15-20 such wells per annum.

3. A glimpse of hope for shale gas

Last year Algeria produced the same amount of gas as it did in 2000 (8.9 BCfpd) – in and of itself this is by no means bad news for the country, were it not for the increasing domestic consumption levels. The Algerian government is cognizant of the challenges this poses for the country’s pipeline gas exports (explicitly pointing out a gas shortage in Algeria by 2025-2030 when approving the Hydrocarbon bill) and has sought to attract foreign majors with substantial know-how in developing shale gas reserves to kick-start a long-mooted but never actually launched shale revolution in Algeria. Algeria’s shale saga with ExxonMobil is symptomatic in this sense – ever since the 1st round of official talks in February 2018, Sonatrach has wanted to partner ExxonMobil (till now not present in Algeria) it the shale-bearing Ahnet Basin yet the country’s conflict potential keeps on heading off a deal. 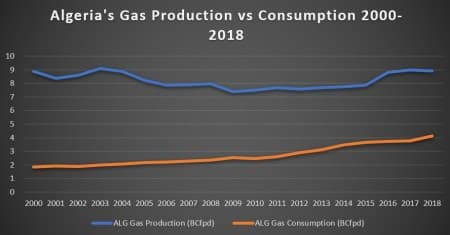 There are many reasons to keep Algeria’s gas dreams alive. The European Union is interested in Algerian gas as all the required infrastructure (subsea pipelines to Italy and Spain) are in place and do not require additional expenses – moreover, providing stable supply in times when Russia and Norway amount to two-thirds of EU gas imports. But Sonatrach’s recent investments necessitate a more vigorous gas policy, too. Just a couple of weeks ago the Algerian NOC has signed a contract for the construction of a 450ktpa polypropylene petchem plant in Ceyhan, Turkey which is expected to be fed from Algerian sources (Sonatrach participates at 34 percent, along with Turkish firm CPEY).

From whichever angle you look at it, the proposed Algerian Hydrocarbon Law strikes you as being too timid and non-ambitious rather than being a game-changer that would, in the words of the phrenetic protesters, cede Algeria’s oil and gas bounty to foreigners. It introduces helpful features – the return of the PSA contract, simplification of taxing and incentivizing drilling in off-bounds zones like the offshore – yet fails to address the main dilemma of Algerian oil policy, namely that Sonatrach cannot carry out everything on its own and that the government’s general course bars it from prioritizing projects. Scrapping the 51/49 all across Algeria would have a transformational effect on Sonatrach’s financial health and long-term prospects.