The ADX Indicator and Its Uses

When you do any kind of trend trading, the ADX is one indicator that you will want understand well. The ADX is especially good at highlighting trends, where they begin and where they’re likely to end.

The Average Directional Movement Index or ADX for short consist of three separate outputs: The main line (ADX) and the two directional components +DI and -DI. This terminology may vary depending on which charting system you use.

Together, by reading the three ADX outputs you can obtain an accurate picture of trend and more importantly how it is changing over time.

The main line of ADX is a measure of trend strength, or precisely the rate at which the trend is changing. A low value in the ADX doesn’t necessarily mean there is no trend. Rather it means that the trend is static and is not increasing or decreasing in strength. 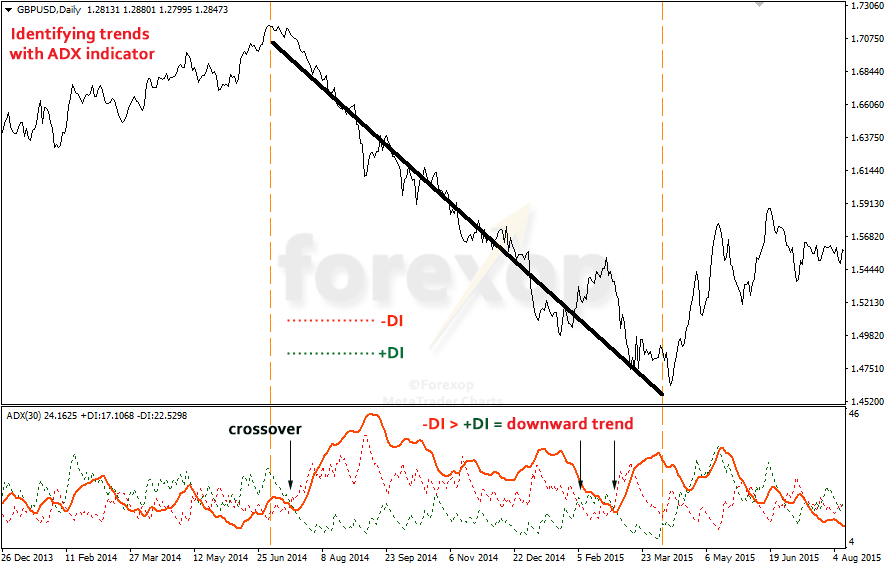 The main line of ADX does not tell you anything about a trend’s direction. The output only tells you about the absolute trend momentum. The value ranges between 0 and 100.

The two directional lines from an ADX indicator will tell you about a trend’s direction, whether it is rising, falling or flat.

Like the main line, both of the directional lines can have values that range between 0 and 100. The value of one relative to the other will tell you about the trend’s absolute direction.

Whichever of the directional lines is greater, tells you which is the dominate direction of the trend. When +DI is bigger than -DI this suggests a bullish trend. When -DI is the greater of the two this implies a bearish trend.

When the directional lines cross over one another or become closer, this tells you that the trend is possibly changing direction.

Because the ADX is an averaging index, it lags the price. There will always be some delay in its response.

When for example the trend changes direction, the directional lines will not change immediately. They will start to change a short time afterwards.  The amount of indicator lag depends on the averaging period chosen.

To understand how the ADX measures trends and changes in trends we have to look a bit further at the calculations.

The ADX averaging period must be set according to the length of the trends you want to identify. Choose a short ADX period for a quicker reacting indicator that responds to short trends. Alternatively choose a longer period for a slower reacting signal that picks up trends that develop over longer time lengths.

Although a short ADX period makes the signal more responsive. At the same time it will be more sensitive to noise and therefore false reports. A setting between 10 and 30 is good for most situations.

A setting of 30 or higher will pull out the significant trends in most charts though the tradeoff is that there will be some lag. 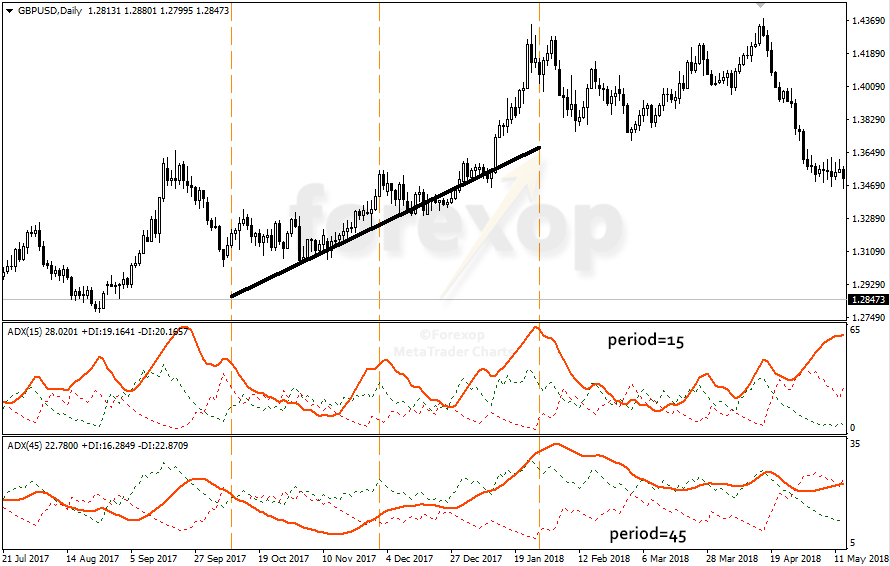 In Figure 2, the upper window shows ADX-15, while the lower shows ADX-45. The +DI line is the green dotted and the -DI is red dotted line.

At a period of 15, the ADX identifies the main trend line as two different trends. It detects the small peak in the middle as an entirely separate trend. This is marked with the +DI line briefly crossing below the -DI line. It also identifies both the start and end of the trend at an earlier point.

At period 45, the index is slower to react to the changing trend. At this period, the peak in the middle of the trend causes only a small reaction and there is no crossover. The main line continues to grow, suggesting a strengthening trend. This happens until just after the trend reaches its highest point at which the main line starts to fall again.

READ ALSO  Greed is Back – NorthmanTrader

One of the most profitable ways to trade the ADX is by using the strategy known as divergence. A divergence happens when there is a conflict between the price and the output of an indicator. The usual scenario for a divergence is when the price is still rising but the indicator is suggesting momentum is slowing. 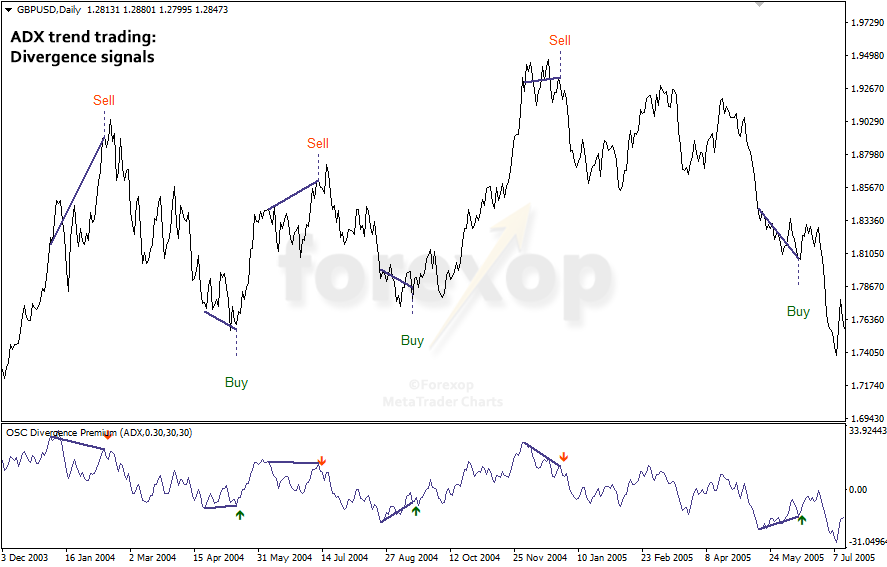 The bullish divergences are the exact reverse. These happen where the upwards directional line is rising faster than the downward line, and at the same time, the price is falling.