At a time when petrol demand has suffered its worst crash in decades and electric vehicle manufacturer Tesla has overtaken Toyota to become the world’s most valuable carmaker, petrol stations seem an unlikely place to make a $21bn gamble.

But forecourts have provided the backdrop for a hotly contested takeover battle between two of the world’s largest convenience store operators and a debt-addicted UK petrol pump group, culminating in one of the year’s biggest takeovers.

Speedway’s suitors piled in at elevated prices even though its core product, the petrol pump, risks becoming largely unprofitable in little over a decade. The bidders were instead racing to dominate the convenience store market, betting that growing demand for the sites’ coffee, fast food and grocery offerings will offset any drop in fuel sales.

For Ryuichi Isaka, who took over as president of Seven & i in 2016 with the backing of US activist Daniel Loeb, an investor at the time, the deal is emblematic of his ambition to transform the group into a global retailer. It is a bold move even for a company that has executed more than 40 deals since 2006 to become the top operator of convenience stores in the US, overseeing 9,046 outlets.

Buying Speedway, Seven & i’s largest-ever acquisition, will give the company a comfortable lead against its nearest rival Couche-Tard, which runs nearly 6,000 outlets. Scale matters, executives argue, in consolidating a fragmented market and driving down costs.

The addition of Speedway’s 3,900 stores in the US will immediately double Seven & i’s operating profits in the country to $2.2bn.

But the deal comes during a pandemic that has dealt a blow both to the US retail and refinery industries as well as Seven & i’s operations in Japan. It would also double the Japanese group’s petrol sales in the US to nearly $40bn at a time when businesses are under increasing scrutiny from investors and consumers for their climate and sustainability efforts.

“The rationale is to acquire convenience stores, but petrol sales will increase as a result,” said Kazunori Tsuda, analyst at Daiwa. “With an increased focus on the ESG agenda, there could be investors who will hesitate from investing in Seven & i,” he added, saying the company needed to do more to increase its environmental, social and governance disclosure.

Shareholders have questioned Mr Isaka about whether, with deep uncertainty about the future of petrol-powered cars and US climate policy ahead of the November presidential election, it is the right time to make such an expensive wager.

The acquisition price has also spooked investors, with the Japanese group’s shares having fallen nearly 30 per cent since talks on Speedway were first reported in February, including a 4.8 per cent drop on August 3 when the deal was confirmed. The stock has since risen 8.6 per cent.

Seven & i, which will finance the deal mostly with bank borrowings, insists the actual price tag will be closer to $12bn, once US tax benefits, asset sales and post-merger synergies are factored in. Their interest-bearing debt is expected to rise from ¥982bn ($9.3bn) to ¥3.3tn after the acquisition.

“My view is that this is a transformative acquisition. The price is not anywhere as near as expensive as it looks,” said Michael Allen, analyst at Jefferies.

Still, Moody’s immediately downgraded Seven & i’s credit rating by one notch to A2, warning that “the execution risk in integrating this large acquisition overseas . . . will be significant”.

READ ALSO  US Republicans must make peace with the state

One person close to a disappointed rival bidder said that, because of the high price, “it’s probably going to go down as one of the worst corporate deals in the last decade”.

However Seven & i executives say the deal makes strategic sense, and point to their past M&A record in the US — a return on investment of 9.6 per cent and a 40 per cent rise in earnings before interest taxes, depreciation and amortisation since 2006.

Armed with cash and cheap financing, Japanese companies have spent record amounts in recent years buying overseas assets. Seven & i, with annual revenues of $113bn, faces a shrinking home market where the profitability of its convenience stores has been declining. Groups from Mitsubishi Heavy to Hitachi have completed large deals despite coronavirus, driven by a similar sense of urgency.

But the outlook for petrol stations is uncertain. In a presentation to investors on the Speedway acquisition, 7-Eleven executives were bullish about the future of fuel consumption, saying the penetration of electric vehicles will remain limited despite a crackdown by governments worldwide on carbon dioxide emissions.

If the rival offer lined up by EG is any indication, the prospect of declining fuel sales and the shift to battery-powered vehicles did not seem to deter some large investors.

EG, a UK forecourt operator that began as a single petrol station run by brothers Mohsin and Zuber Issa in 2001 and has since grown rapidly via a series of debt-fuelled acquisitions, had pulled together a $17bn financing package split evenly between debt and equity, according to people familiar with the bid.

Banks had agreed to underwrite a major bond issuance even though EG’s debt pile had more than quadrupled since the end of 2017, topping €8bn last year when it sold bonds to pay for the $2.2bn purchase of 568 petrol stations in the US. On top of that it raised equity commitments from sovereign wealth funds and private equity groups, said a person close to the deal.

EG and Couche-Tard declined to comment on their bids. 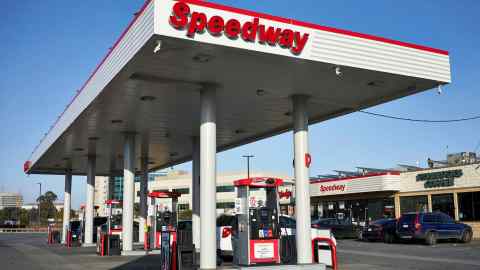 But the deteriorating US refining sector, where the pandemic has slashed demand, has created a gloomy backdrop to the deal. Last week Marathon reported second-quarter revenue of $15bn, less than half that of a year earlier, and an adjusted net loss of almost $900m.

Under pressure from the activist hedge fund Elliott Management, the Ohio-based company has been planning to separate the Speedway business for years with the market downturn accelerating those efforts. But the sale will leave the refiner more exposed than ever to the embattled energy sector.

“Pure play refining can be pretty rough,” said Matthew Blair, head of refining research at investment bank Tudor, Pickering, Holt & Co. “It’s going to be more volatile. And in a low-margin environment, it’s going to be a rollercoaster.”

Increased sales of alcohol and cigarettes had helped offset lower demand for other goods in its stores, Marathon said, leading some advisers to question its decision to sell the unit.

“You’re selling the steady bit of your cash flow right at the time when you most want steady cash flow,” said one consultant to Marathon. “People need smokes and they need junk food and they will always buy that stuff.”