The 1998 Correction And The Run To The Peak

Over the last few months, the markets have become engulfed by a palpable feeling of exuberance. I remember the last time investors were engulfed in a near-“panic” to invest. It was 1998, where following a correction, the market began a seemingly endless run to the peak in 2000.

I’m not too fond of market analogs, as no two market environments are ever the same. However, there are many comparisons currently to the late ’90s to explain the current bull market. The chart is below. 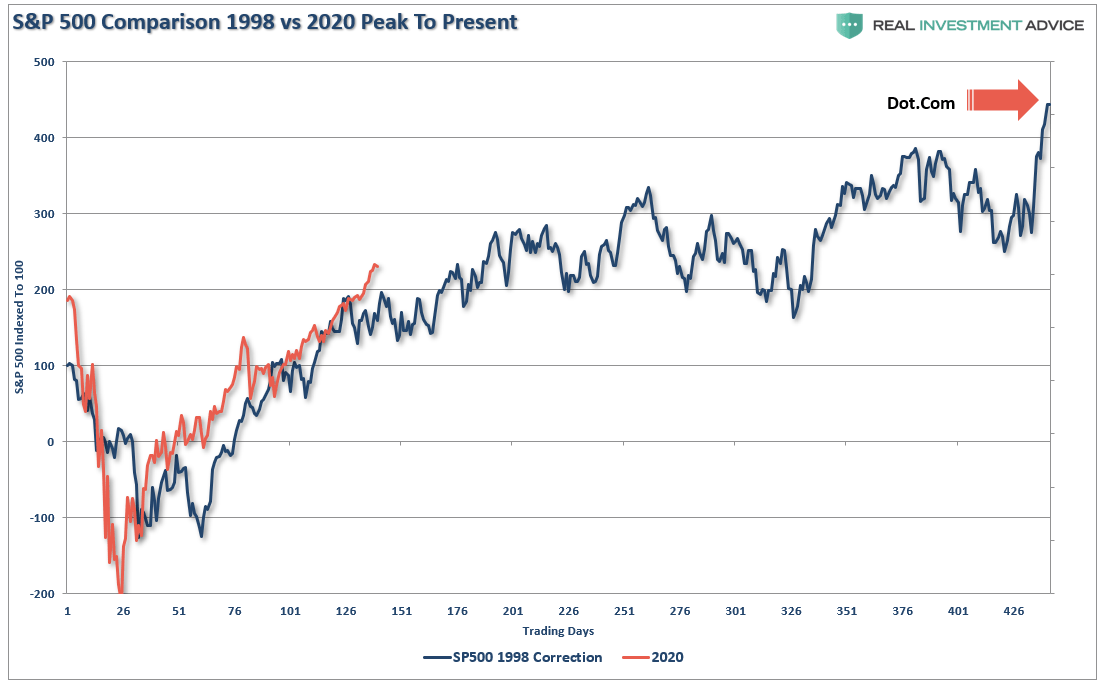 Another comparison is valuations. 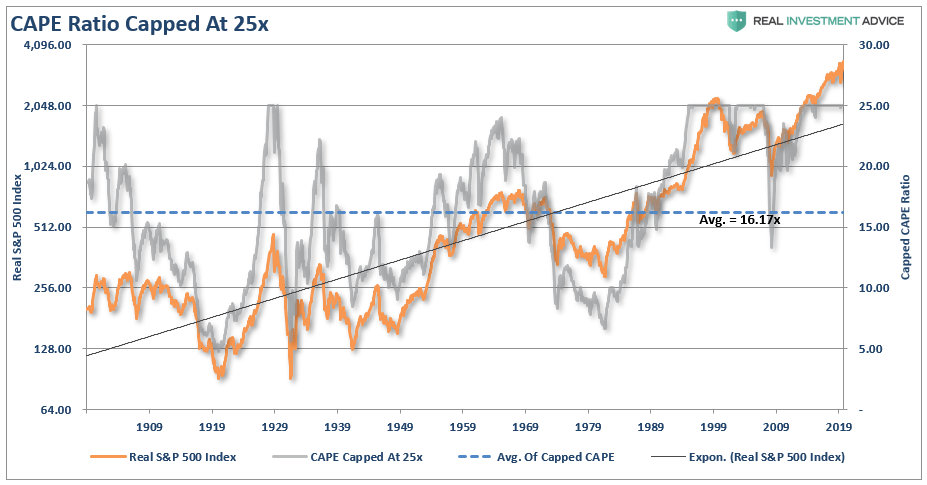 Currently, the S&P 500 is trading at 31x trailing CAPE earnings. For comparative purposes, I have capped CAPE at 25x in the chart above, which aligns it with every valuation peak throughout history.

The deviation in valuations above the long-term average also only occurred in the late ’90s. 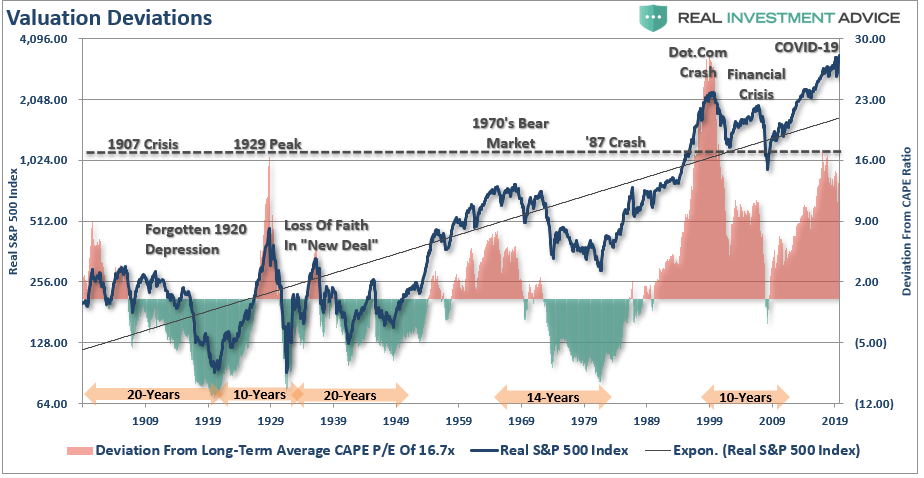 In the late ’90s, there was also rampant speculation in unprofitable companies simply because they were associated with the rise of the internet. Stocks like JDS Uniphase, Lucent Technologies, Global Crossing, Enron, SDLI, and a host of others would rise each trading day by 50 points or more. 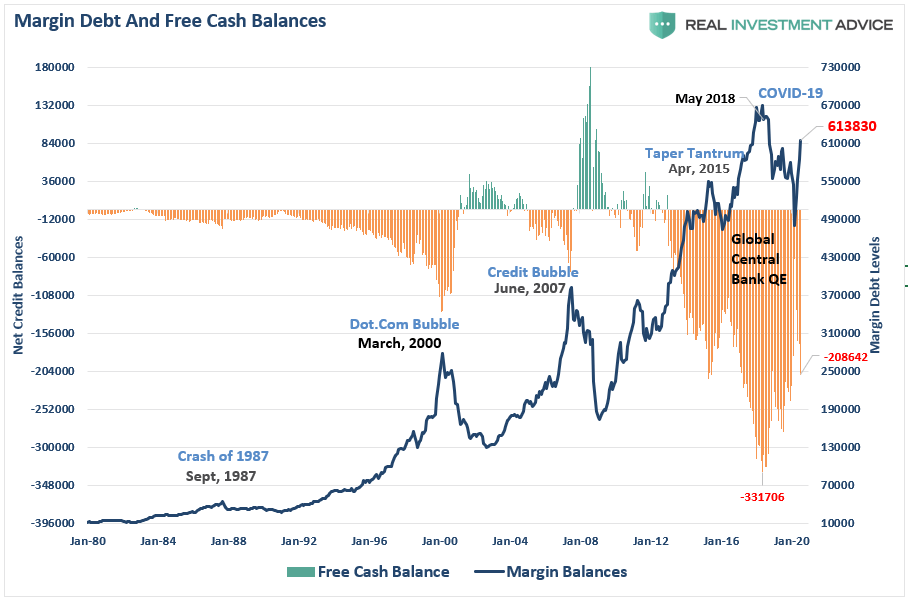 Or even better, use buy call options to increase the buying power of your money. Today, there are more call options on stocks than we saw then. 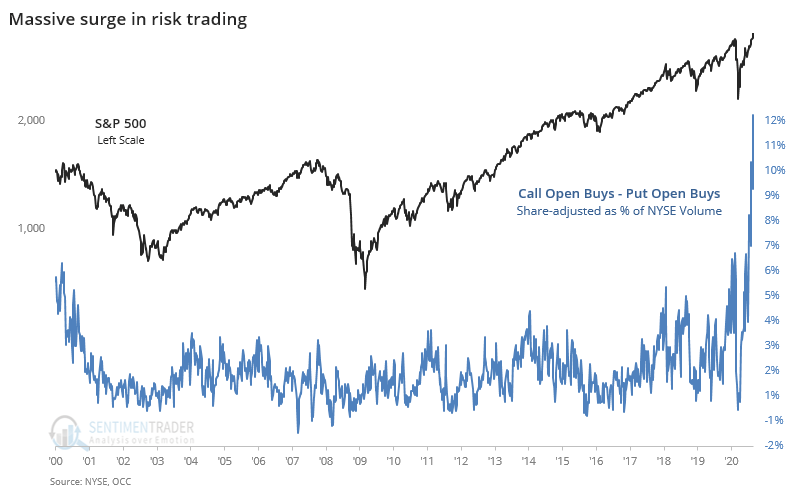 Value Is For Boomers

Previously, I discussed the disparity in value and the deviation between value and growth.

Part of those discussions related to similarities seen at previous market peaks where investors threw “caution to the wind” and paid astronomical prices to own the “hot stocks.”

While most young investors today assume “buying value” is for “Boomers,” it is worth remembering what Scott McNealy, then CEO of Sun Microsystems, told investors who were paying 10x price-to-sales for his company in a 1999 Bloomberg interview.

“At 10-times revenues, to give you a 10-year payback, I have to pay you 100% of revenues for 10-straight years in dividends. That assumes I can get that by my shareholders. It also assumes I have zero cost of goods sold, which is very hard for a computer company.

What were you thinking?”

How Many Do You Own?

Currently, there are hundreds of companies trading well beyond 10x price-to-sales. Below is a list of some of the “hot stocks” young investors are piling into trading at 10x or more. 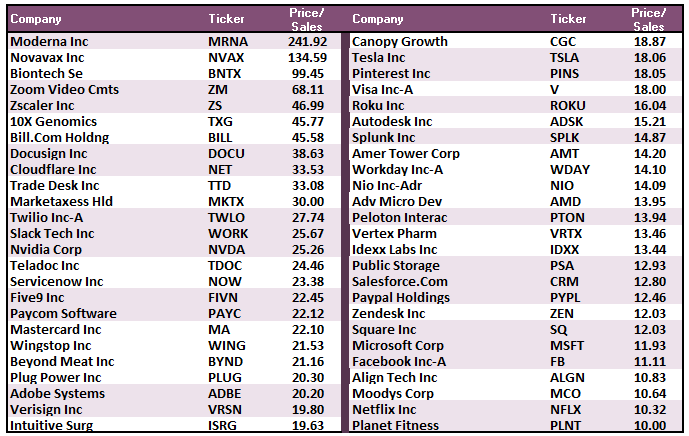 Of course, much of this is “forgotten history,” as many investors today were either a) not alive in 1999, or b) still too young to invest. For the newer generation of investors, the lack of “experience” provides no basis for the importance of “valuations” to future outcomes. That is something only learned through experience.

Bubbles Are About Psychology

Just as was the case in 1999, investors believe that stocks are essentially a “one-decision” investment. You buy them, and they only go up in price. In 1999, a large majority of these companies were financially unstable or grossly overvalued at best. Today, as shown above, it isn’t much different.

Notably, in 1999, as it is today, there was “no one” saying there was a “Tech Bubble.” As Mark Hulbert noted earlier this year, it was quite the opposite. It also smacks of current sentiment as well:

“After reading through my newsletter archives from January 2000, I was struck by the similarities between now and then. For example, one newsletter editor in mid-January 2000 said he was encouraged that the Fed was signaling that it wouldn’t be raising rates as aggressively as previously thought. Another said, “inflation is dead.” A third celebrated the strength of the economy, as evidenced by robust consumer spending in the Christmas season that had just ended.

Sound familiar? To be sure, these similarities don’t mean the U.S. market is at or near a top. It does illustrate the false comfort we gain when telling ourselves a bear market can’t happen since the economy is strong, inflation is moribund, and the Fed is accommodative.”

As Mark goes on to note, the extension of valuations is concerning. However, valuations are a poor measure of market “bubbles.” Why? Because “bubbles” are a “psychological phenomenon” where investor “greed” completely overrides “logic” and “restraint.”

READ ALSO  The Permian Is Facing A New Pipeline Problem

More Similarities Than You Think

The current bull market is by far and away one of the longest bull markets in history. Currently running 137 months and 2783 points from the March 2009 lows, it is one for the record books. However, it is also important to remember that it is only the first half of a full-market cycle. 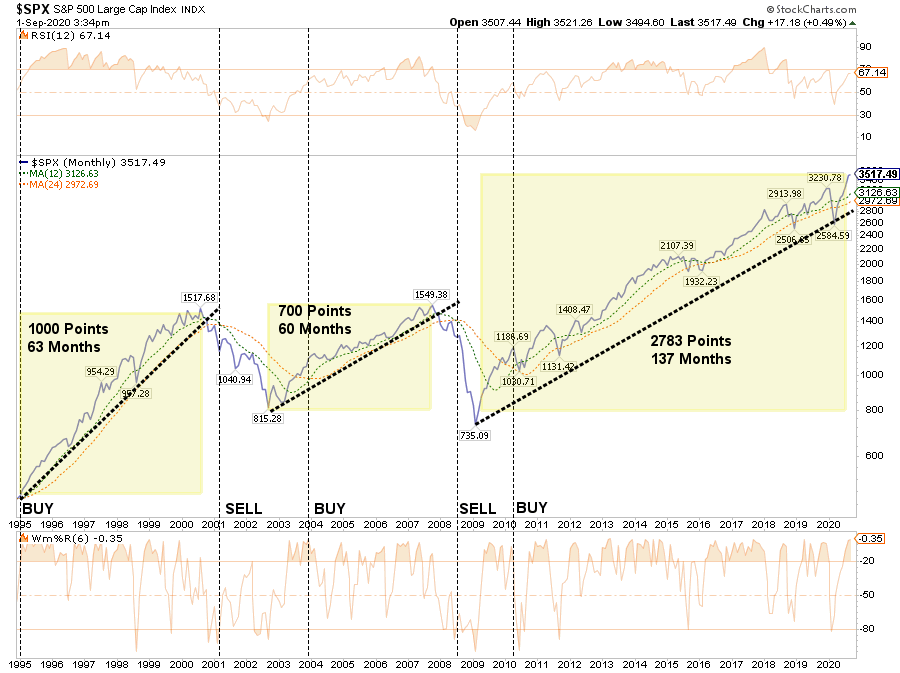 Here are some similarities:

Of course, those are just some of the similarities.

As noted above, valuations in all three cases exceeded the long-term market peaks of 23x reported earnings. Furthermore, just as we saw each time previously, investor confidence is pushing extremes. 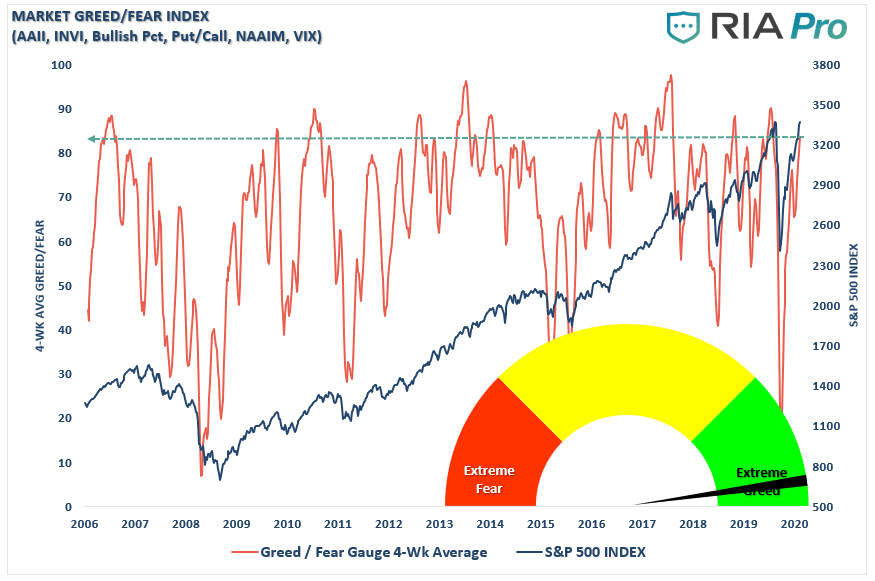 Again, none of this suggests the market is going to crash tomorrow.

History suggests the markets can, and will likely continue to, rise in the short term. As I stated, momentum is a tough thing to kill.

However, I have played this game before, and as the old saying goes:

“The more things change, the more they remain the same.”

If you have been around the markets for any length of time, you can quickly spot the “pigeons at the poker table.“

These are the ones that continually rationalize why prices can only go higher, why this time is different than the last, and solely focus on the bullish supports. Trying to “draw to an inside straight” is not impossible; it just leads to losses more often than not.

Gambling in the stock market may be fun in the short term. However, it would be best if you always remembered why Las Vegas makes billions in profits every year.

If you play long enough, “the house always wins.”