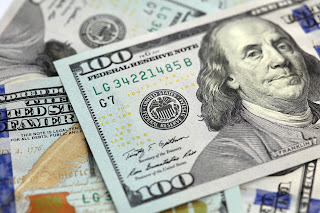 The $100 bill, the largest denomination actively printed banknote in the United States, has also become the most widely circulated currency unit.
The hundred, aka the privacy note, has overtaken the ubiquitous $1 bill in circulation volume, for the first time in history, according to the IMF.

The IMF’s Finance & Development magazine reports that there are more $100 bills circulating now than ever before, roughly doubling in volume since the global financial crisis. 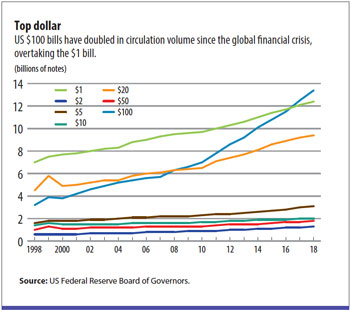 The Benjamins seem to be heading overseas.

Expect government officials to continue to push hard to eliminate the hundred. They hate the increase in circulation of this bill/

Harvard University economics professor, former IMF Chief Economist and anti-big bill advocate Kenneth Rogoff says illicit activity and big banknotes are closely linked. “Worldwide, high-value currency notes are mainly used to avoid taxes and regulation, and for illegal activity,” he says. “Apartments and houses in major cities all over the world are paid for with suitcases of cash every day, and it is not because the buyers are afraid of bank failures.”

Bottom line: Rogoff and his type will use any excuse to justify the elimination of high denomination currency to justify tracking all our spending. He is the ultimate technocrat for the totalitarian state.