Th War on Landlords is Accelerating: How Bad Will It Get? 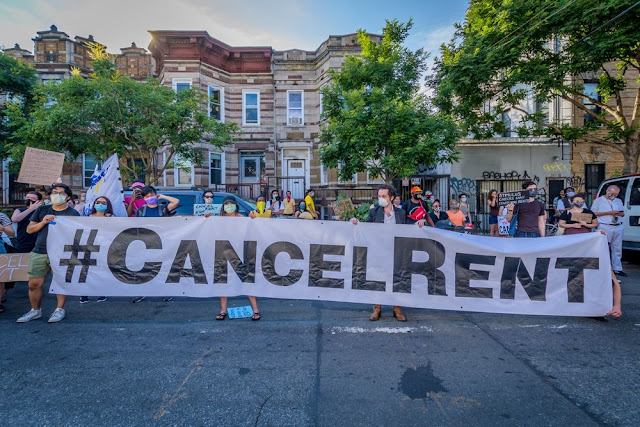 As the widening gyre that that is 2020 continues to turn, it seems that every day some new disastrous and ill-thought-out proposal is made or policy implemented. Among the chaos, the chorus to cancel rent in particular has stuck out for its sheer insolence and the ease with which it has entered the discourse as a sensible policy solution.

The idea of abolishing rent is not new, but until now it has never really been considered anything but a nutty pipe dream. But with the economic carnage wreaked by the virus and ensuing government lockdown still ongoing it has disturbingly come to be viewed as a conceivable policy option. With tens of millions out of work, the ability to pay for basic necessities like housing is obviously a valid concern, but the callousness of the idea of simply expropriating housing from property owners is disturbing and indicative of darker trends coursing through the body politic in these turbulent times.

One of the most high-profile leaders of the cancel rent movement is Minnesota congresswoman Ilhan Omar, who introduced legislation in April that basically amounts to nothing other than government extortion of landlords. Christian Britschgi reports that the bill would simply cancel all rent and mortgage payments for primary residencies across the entire country until a month after the federal state of emergency has ended. Attempting to collect rent or reporting the nonpayment of rent to credit agencies results in increasing fines, including the seizure of one’s property.

After Omar had taken a baseball bat to landlords’ knees everywhere, she generously extended a government crutch, with strings attached, of course. Landlords who accepted federal aid in compensation would be required to not raise the rent for five years, and they would not be able to take into consideration someone’s credit or criminal history when taking rental applications. Additionally, landlords would be required to provide tenants with 10 percent equity in the property. The mafia would be proud of such a blatant shakedown.

Fortunately, Omar’s bill has a snowball’s chance in hell of becoming law at the moment, but that doesn’t mean that people will not keep trying to cancel rent. Since the crisis began, groups around the country have called on people to simply stop paying their rent in an attempt to simply force its cancellation. Washington Post columnist Michelle Singletary wrote that “this movement is not without merit,” but at least pointed out that while many jurisdictions have put a moratorium on evictions, rent that is not paid now will still be owed if the tenant doesn’t want to face eviction when the moratoriums expire.
The United Neighborhood Defense Movement, which has a chapter agitating in Pittsburgh, has a manifesto chock full of socialist buzzwords about the evils of the capitalist system that oppresses everyone for failing to provide housing to them for free by virtue of their existence. With the seriousness of a college freshman fresh off a bong hit, they declare that “Housing should be collectively owned, managed, and built for the most benefit to those who live within them. Housing is a people’s right, and should not be cause for private profiteering.”
Similarly, writing in Teen Vogue, Kandist Mallet launched a full-on socialist attack on the very idea of property itself, saying that privately owned housing causes “economic violence” and that the pandemic has exposed “the cruelty of payment-based housing.” According to Mallet, housing should be considered a human right that must be provided for everyone by virtue of their being born. But instead the evil institution of property is defended by the state and its agents. This is unsurprising, she declares, since the US is “a country founded on the genocide and colonization of indigenous peoples.””While rent should of course be canceled during the pandemic, she argues, the end goal is “a rejection of the construct that any one person should own this earth’s land.”

It is fitting that such a call for the abolition of property itself can be found in a fashion magazine like Teen Vogue, because it speaks to the heart of the issue true liberals are facing in the wider culture today. Woke socialism has become fashionable, especially among the youth. Some might say that Teen Vogue has moved away from its fashionable roots, but that is incorrect. Teen Vogue has come to understand that the Jacobin desire to tear existing institutions to the ground in the name of progress is “in vogue,” so to speak, and therefore promotes both sexual and socialist revolutionary fervor.

It does not bode well for our society when proposals to simply expropriate property are becoming more and more prevalent and discussed with more seriousness. While it seems hard to imagine now, it is not out of the question that these antiproperty sentiments could continue to gain ground and eventually culminate in a genuine unabashed socialist coming to power. Venezuela was once the richest country in South America but is now a crumbling ruin thanks to the socialists who have been in power for two decades. A similar fate awaits us unless we are able to prevent the continued erosion of the institution of private property in this country.