Shares of TG Therapeutics (NASDAQ:TGTX) have lost 10% of their value since my early 2018 article suggested readers purchase a pilot position in light of the best-in-class potential of anti-CD20 monoclonal antibody ublituximab. Furthermore, I cited approved anti-CD20 ocrelizumab (saw first year sales of nearly $1 billion) and noted that ublituximab could compete on the basis of price and convenience.

A quick glance at the company’s corporate presentation reveals multiple data readouts and regulatory decisions await this year, so I’m keen to revisit and highlight the opportunity for readers.

When looking at charts, clarity often comes from taking a look at distinct time frames in order to determine important technical levels to get a feel for what’s going on. In the above chart (daily advanced), we can see shares run up through Q4 2019 into the mid teens in early 2020. However, along with the biotech sector, they pulled back substantially in late Q1. In my opinion, the current bounce above the 200-day moving average is offering readers a chance to scoop up shares ahead of upcoming data readouts.

In my prior article, albeit quite dated, I cited the following keys to our bullish thesis: 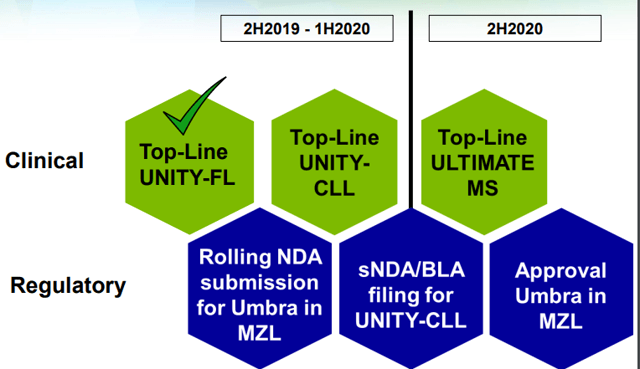 Let’s move on to potential drivers for upside this year to determine whether readers should take a position ahead of them.

For my top ideas, I look for key events in the near to medium term that truly have the potential to move share price and valuation to new levels. Likewise, I consider an idea to be even more attractive should multiple material events exist throughout the next few quarters (a catalyst pipeline), making it easier for us to hold with patience through them all (assuming we have sufficient conviction).

In the case of TG Therapeutics, topline progression-free survival results (PFS) from the phase 3 UNITY-CLL trial could come any day now (if successful BLA would be submitted by year end). Here, prior data is supportive of a positive outcome. 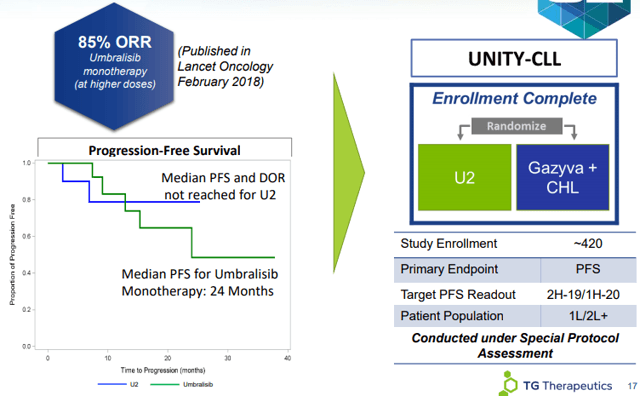 Playing devil’s advocate, it’s always possible that placebo outperforms and prior screwups are a knock against management (such as in 2018 when management claimed ORR was not mature enough and pivoted to focus on PFS as primary endpoint, spurring shares to gap down by over 40%).

Even for a company with $1 billion market capitalization, this catalyst is significant, considering the size of the CLL market (115,000 Americans living with the disease, 20k newly-diagnosed patients each year). To be fair, this is quite the crowded indication, and so I feel that I have less of an edge on this one.

Moving onto regulatory catalysts, rolling NDA submission for umbralisib in patients with previously treated MZL and FL should be completed in the first half of 2020 (a good step in the right direction, though not necessarily “needle moving” in and of itself). Given the strength of data for these indications, I’d argue that approval seems highly likely. 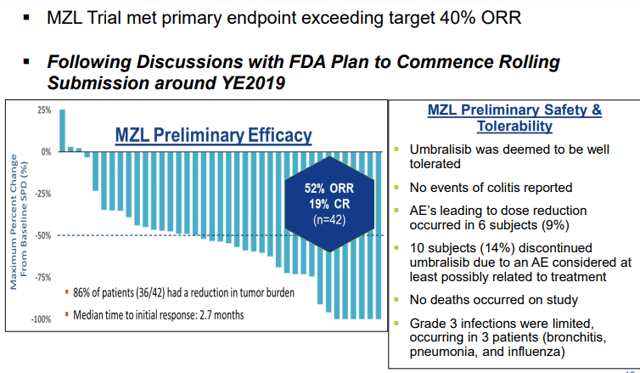 The opportunity here shouldn’t be discounted, with 7,500 new cases per year and around 3,000 relapsed patients needing treatment each year. While other treatments are available (CD20, BTK, PI3K Delta), it’d appear that umbralisib and U2 strike an optimal balance between safety and efficacy.

Moving onto the catalyst I most look forward to, topline results from the phase 3 ULTIMATE I & II trials in RMS (relapsing multiple sclerosis) are expected 2H 2020. As to why I believe this one is truly a “needle moving” catalyst, consider that Roche’s Ocrevus’s Q4 2019 sales came in at around $1.08 billion, and the asset is thought capable of doing up to $6 billion in peak sales.

READ ALSO  After the Pandemic: Science and Medicine 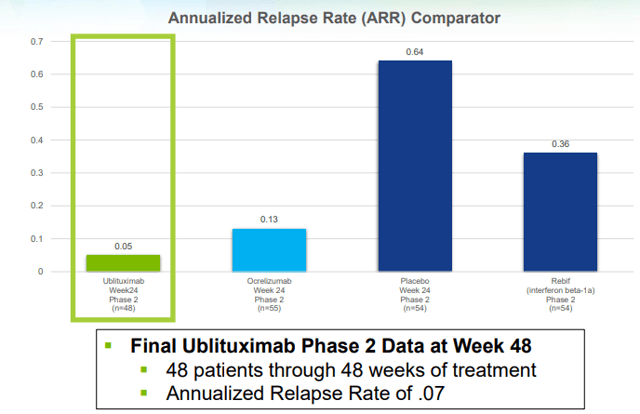 Also, in terms of competition in the MS market, consider that Novartis’ (NYSE:NVS) ofatumumab also will compete on convenience, given that it’s administered subcutaneously. Devil’s advocate would state that perhaps three is a crowd, and it’s often rough going for smaller biotech companies going up against big pharma.

Lastly, the company continues to advance our early pipeline candidates, including TG-1501 (cosibelimab), TG-1701 and TG-1801. It would appear that the intriguing potential of these assets is not included in the current valuation, providing investors much optionality. BTK and CD47 are both red hot areas of oncology, so that the company is developing its own wholly owned assets is quite exciting. Initial data for the proprietary triplet of U2 plus TG-1701 was presented at ASH and showed 86% ORR in patients with relapsed/refractory NHL and CLL at the lowest dose of TG-1701 tested. The goal from here is to continue dose escalation and find the right dose to move forward.

For the fourth quarter of 2019, the company reported cash and equivalents of $140.4 million with management guiding for operational runway well into 2021. Net loss for the quarter came in at $39.6 million, while research and development expense fell to $29.5 million. G&A expense was $2.9 million.

On the Q4 conference call, management provided an update on UNITY-CLL reminding investors that this is an event-driven study where they were expecting a significant ramp in events over the past few months. They believe the uptick in events should take place soon or that U2 is providing greater benefit than originally modeled. Agreement was reached with the FDA to conduct an interim efficacy analysis which would allow the trial to be stopped early should there be greater-than-expected PFS benefit.

Regarding the opportunity in MS, CEO Michael Weiss notes that they will bring the third CD20 to market. Ocrelizumab did almost $4 billion of sales in 2019, and ofatumumab should come on the market within 6 to 9 months. Ofatumumab will be 3 weeks in a row of subcutaneous injections in office and then take-home 1 month or every month. Thus, ublituximab’s fate in this three-way race is set to be determined by personal preference (self-inject or get IV infusion). He states the product could even have less of a financial impact on patients themselves, so the objective is likely to compete via lower price point as well.

As for institutional investors of note, RA Capital Management has been adding to its position (9.40% ownership).

Devil’s advocate stance would be again that the company is going after indications and asset classes where there is already substantial competition, and it’s truly hard to differentiate versus offerings backed by the marketing muscle of big pharmaceutical companies.

To conclude, even with a $1 billion market capitalization, it would appear that substantial upside potential lies ahead as the company continues to focus on B-cell diseases where it believes it can show significant differentiation versus better-capitalized competitors. Multiple assets possess best-in-class potential, and management wisely seeks to develop in-house combinations, so they can retain the majority of economics should commercialization be reached. Near-term opportunities in CLL and MS could be unlocked with pivotal data readouts, and the latter of these indications is particularly interesting. At the same time, early-stage compounds, including TG-1701 and TG-1801 (BTK and anti-CD47/CD19) provide longer-term optionality.

For readers who are interested in the story and have done their due diligence, TG Therapeutics is a Buy, and I suggest accumulating shares ahead of upcoming readouts.

At the same time, readers should be well aware of the risks involved, including disappointing readouts, negative regulatory feedback and decisions, possibility of further dilution and especially the high amount of competition in market opportunities they are going after (unless an asset shows substantially better efficacy or safety, it can be hard to make inroads against big pharma marketing muscle).

As for elements of derisking (key trait we look for in ROTY ideas), the validated nature of targets they are pursuing (CD20, CD47, BTK, etc.), coupled with data sets generated to date would imply that this one has at least some cushion.

Author’s Note: I greatly appreciate you taking the time to read my work and hope you found it useful. Consider clicking “Follow” next to my name to receive future updates and look forward to your thoughts in the Comments section below.

Take a 2 Week Free Trial and Join 650+ biotech investors and traders in the ROTY Community!

Check out recent reviews of the service here.