Apache (APA) has made news in recent times largely for the potential of their Alpine High field in West Texas. The crash in everything shale currently has moved this potential to the back burner, and the company’s stock has declined commensurately over the course of the year. 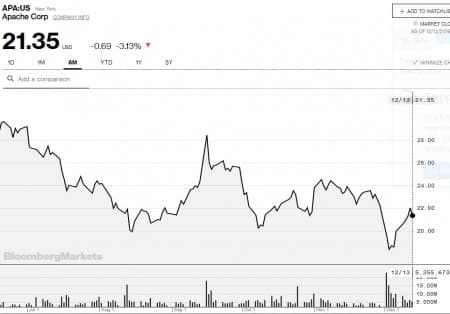 For the last several year it’s been the Alpine High asset that has driven interest in this stock. Discovered in 2016, Alpine High was heralded as a massive resource, estimated at 3 billion BOE, and up to 75 TCF of wet-gas. Development began immediately and for the next several years it was the focus of Apache’s quarterly conference calls.

In 2019 after over a billion dollars of cryogenic infrastructure and pipeline development, Apache was forced to curtail acceleration of Alpine High due to low gas prices. The stock fell quickly from the mid $30’s to under $20.00 as this was announced in Q-3.

The stock took another hit in early December, 2019 when some initial results from the Maka Central-1 well offshore Suriname were announced. The news release disappointed the investment community as it was very sparsely worded. The conventional thinking was that the news was all bad.

We aren’t so sure after parsing the wording of the Apache’s announcement.

Apache has a couple of blocks that potentially could contain a reservoir similar to Exxon Mobil’s (XOM) now ongoing Liza development offshore Guyana. After a couple of dry holes in 2017 in Block 53, Apache spent a couple of years reviewing their results and not saying much about this acreage. In particular there was hope for Block 58, covered by a separate PSC from Guyana’s Oil Ministry.

In this article we will parse some of the language used in the release for deeper analysis of the information released. We think there’s a possibility that Apache could have been tamping down the market for reasons that we will discuss.

Apache put out what’s been described as a very thin news release the other day. As discussed above, most analysts took this as a negative, and they may very well be right. But there are several tantalizing comments in the quote below to the experienced eye. Related: For The First Time Ever, Shell Signs $10B Emissions Linked Financing

“Upon reaching a depth of 6,200 meters, APA says it decided to conduct various testing activities in two distinct Upper Cretaceous play types; following completion of these tests, the company will set casing, make equipment modifications to the rig, and resume drilling in mid-December to evaluate a third play type in the Cretaceous, with a new target depth of 6,900 meters.” 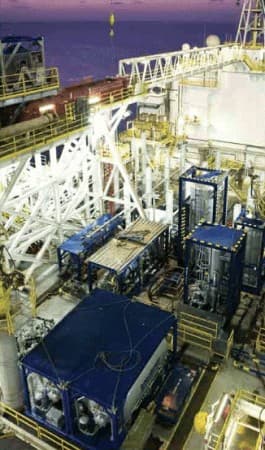 Let’s unpack what I’ve bolded in the quote above.

This is intriguing. The main “testing” activity that occurs to me at this stage is a decision to move from a simple Drill Stem Test, DST, to perhaps running core barrel to take whole cores from the new interval to be drilled. A DST already was planned and doesn’t require a lot of out of the ordinary rig up. Taking whole core is a different exercise that may involve specialized drilling fluids, new crew members with specialized training, and will take some rig time. If it’s the case they are taking whole core, it’s incredibly bullish for this well. Somebody might want to hang out on the freight dock at Core Labs (CLB) for a scoop!

“The company will set casing”

This is not a decision that is taken lightly. Running casing is not done for a P&A, I will guarantee you. It takes several days of rig time to rig up and run casing, and of course the casing is itself expensive. We are looking at a couple of million dollars of additional costs to set casing across this interval.

“Make equipment modifications to the rig”

Now, this is the comment that really got my imagination racing. About the last thing an oil company wants to do these days is spend a nickel more than necessary on a drilling rig. So in this context, what does the quote above mean?

The picture above shows an equipment rig up on a deepwater vessel for an extended flow test. This typically involves a demob of the rig to a shore base for piping fits and a SIT test (a pretest before the real thing to make sure it all works as designed).

There also will likely be an exercise called a CWOP to work through procedures and get buy-in from the drill crews and service providers. This debugs the operations program and enhances safety and has become a standard practice in the industry before commencing an operation of this type. All of the above can take weeks to accomplish. I have been involved in a number of these over the years and they all followed the format I’ve outlined above.

My guess is they are going to load out some equipment for an extended well test once the deeper interval (6,900M) is obtained. The picture above shows how tight the “real estate” is on one of these vessels.

During this test they will have dozens of specialized crew members (they may even have to send some regular crew members off the boat to make room for them) working tours to carry out and evaluate this testing in real time.

This a big deal, and very bullish for the well.

What is the potential here?

Certainly Apache is chasing the crazy success Exxon Mobil has had in Guyana with their Stabroeck development. With positive results to report APA could receive billions in a farm-in from one of the big guys. This would be a massive boost to the stock.

What do we have as a comparison?

If analysts thought the announcement on the Maka-1 well was thin, how about the release from a couple of years ago when they DH’d the Kolibrie well?

“Apache Kolibrie wildcat, offshore Suriname, failed to hit commercial hydrocarbons. Kolibrie is in Block 53, about 80mi off Suriname. Block 53 covers an area of some 3509 square kilometers, and 500-1800 meters water depth. The Noble Bob Douglas drillship has been released from the location, according to Upstream.”

It makes the announcement on Maka-1 look comparatively like War and Peace. It is the sort of announcement you make when you are walking away from a wet prospect.

Apache has extended the contract for the Noble Sam Croft to March of 2020. As you can see in the screen capture below the Sam Croft remains in the area. 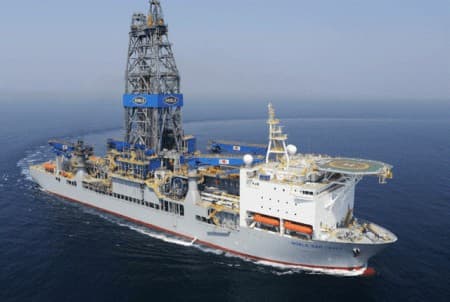 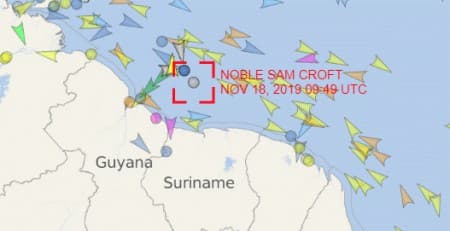 Taking a page out of Shell’s book of “smooth talking”

If you will recall the timing of the announcement of the Shell (NYSE:RDS.A) (RDS.B) Whale discovery a couple of years ago, it will prove instructive here. Let’s take a stroll down memory lane.

The very next day it was announced by the Mexican oil regulator that Shell had been awarded some critical blocks in its offshore auction.

What do you think the chances are that Shell sat on the results of the well testing done on the Whale prospect until the announcement of these blocks were made in the Mexican auction?

With masterful timing Shell got deepwater assets in the Mexican auction that what has come to be “advantaged,” meaning that they are close enough to their substantial Perdido Hub and Great White hosts to be tied in, saving billions of dollars of infrastructure spending.

The Apache comparison to Shell’s information release mastery isn’t perfect but if you parse the phrasing of a recent conference call you might pick up a thread of Shell’s playbook.

Apache’s lease commitments for block 58 contain phases, current Phase-1 will conclude in June of 2020. From comments Apache’s CEO John Christman made in the Q-1 conference call, negotiations with the oil regulator in Suriname are still in process for the commencement and term of Phase 2.

“Hey, good morning. I had a question on Block 58 in Suriname. It looks like the lease expires the initial exploration term June 24 of next year. Can you talk about the renewal process or the extension process on that lease?”

“Bob at this point, we’ve worked with the government of Suriname. We’ve got a one rig or one well, commitment kicks us into the next phase. And obviously we will commence that well ahead of that time schedule, so it’ll kick us into the next phase and that’s all we’ve shared publicly at this time.”

Tight lipped to be sure. But understandable given the magnitude of the potential impact on the company and the country of Suriname. Time will tell.

I am putting Apache on my buy list on weakness below $20.00. It’s rebounded strongly recently following the OPEC announcement of December 6th, re: Production cuts in 2020. The recent news of a Phase 1 trade deal with China has also been bullish for oil stocks.

Run ups like this that aren’t driven by fundamentals often fade as the news ages. That should provide the entry point I highlight above.

That said, it would be a huge boost for the stock if in a month or two Apache were to announce a significant discovery in Suriname. I think a reasonable case can be made that this is a distinct possibility.

It should be noted, that this is a very speculative position, and not for the faint of heart. Apache’s long term fortunes are very much tied to Alpine High and there is no clear picture for when fundamentals will improve in U.S. gas.

By David Messler for Oilprice.com