Tesla’s (NASDAQ:TSLA) current valuation and levels of sales do create quite a level of risk, as justification of an almost $400 billion market cap through sales growth could take some time. Q3 deliveries did spike sequentially due to an increase in production levels, yet shares failed to capitalize to the upside – Tesla needs more than just that small increase in revenues and deliveries to continue justifying this massive valuation; otherwise, shares could be facing a longer bout of consolidation similar to 2013 with not very significant returns until sales scale up to far higher levels.

In order for Tesla to maintain this valuation and grow market capitalization by ~8% annually for the next 3 years to $500 billion, revenues would need to grow quite tremendously, while also assuming that Tesla will eventually trade at a more realistic valuation between 5x and 7x sales in a few years’ time.

To have a valuation at 6x sales in 2023, Tesla would need to produce revenues of $83-86 billion. Assuming total automotive revenues remain ~85% of revenues, auto sales would have to be $70-73 billion. With an average sale price of ~$57,600, that means that Tesla would be needing to sell about 1.2 million vehicles annually.

That’s about three times current deliveries. Capacity is expected to crest above a half-million for the current fiscal year, with deliveries of half a million the current target. However, installed capacity (excluding factories under construction) is about 840,000 vehicles – 590,000 from Fremont and 250,000 from Shanghai. 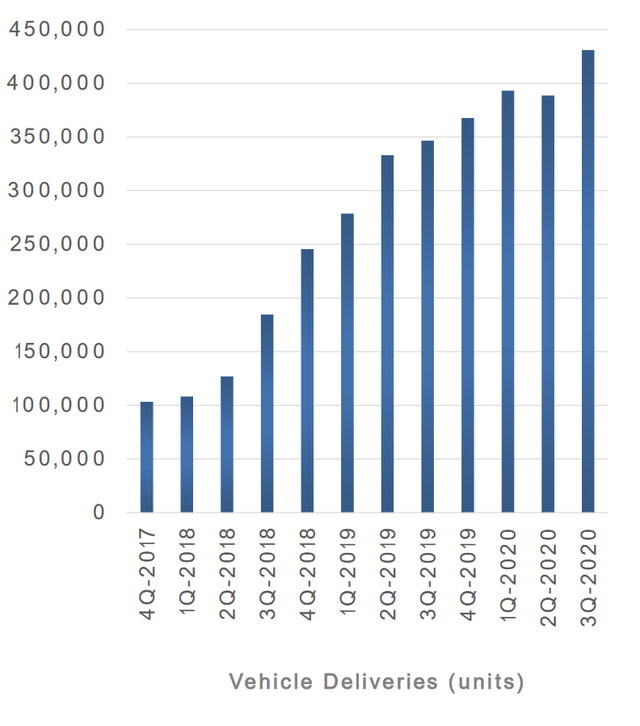 With construction of Gigafactories in Berlin and Shanghai underway, and deliveries of Model Y expected during 2021, capacity expansion could still be hit by then – increasing by ~500,000 vehicles is no small feat, but if new factories match the current 250k run rate in Shanghai, it shouldn’t necessarily be a problem. Pushing the time-frame longer, while still assuming that an 8% growth rate creates more daunting delivery necessities, increasing market share and heavier adoption of EV, making it seem less feasible.

Looking farther out, on a five or ten-year frame, with the same 8% growth rate, the picture becomes a bit more worrisome – 2025’s market cap of $590 billion and 2030’s market cap of $860 billion represent huge upside to today’s levels, but at a high level of sales.

Again, on 6x PS, those valuations would require sales of $98 billion in 2025 and $143 billion in 2030 – that’s a 31% CAGR in sales to 2025, and 14% to 2030. Those growth rates are above the current forward growth rate and could prove hard to come by, even as EV adoption becomes more mainstream due to competitive factors such as pricing and market share.

Assuming Tesla trades at 45x earnings in 2025, at that $590 billion market cap, that correlates to $13.1 billion in net income. Adjusted for inflation, that figure comes down to $11.86 billion in today’s dollars; with auto deriving 85% of sales, Tesla would need to earn $10 billion in profits – a tremendous leap from the sub-$600 million TTM GAAP earnings of today. By 2030, trading at a still generous 25x PE would require net income (inflation-adjusted) of $28.2 billion, with autos deriving $24 billion. That only gives Tesla a mere 5% net margin, running off the inflation-adjusted net income – however, this also comes at a cost of exorbitant vehicle sales.

To have sales of $143 billion, or ~$120 billion from cars, Tesla would need to be selling just over 2 million cars annually by 2030. With plausible EV sales at ~23 million in 2030, that puts Tesla at a 9% market share; while that is far less than Tesla’s 16.2% share in 2019, maintaining that level as the EV sector gains competition in China could be quite difficult over a span of a decade.

Challenges like that might lie ahead, especially within market share, as the EV scene is quite competitive. While Tesla still held the top spot for monthly deliveries with the Model 3 for August, Chinese manufacturers are ramping production and engaging in competitive pricing to take advantage of government incentives favoring locally manufactured vehicles and cost-conscious consumers. Tesla’s top spot in the Chinese market could be facing steeper competition in the upcoming years and could make market share growth tough.

Another challenge to this is that Tesla could find other methods of driving revenues, such as within energy storage, battery tech and services. Energy storage revenues have nearly doubled YTD and could crest over $1 billion by mid-2021 at this rate; if that segment continues to grow rapidly, it could ease the amount of vehicle sales needed to justify the valuation. The same goes for battery technologies – Tesla is continuously working to improve batteries to reduce costs, and this could lead to decreases in vehicle prices in the long run, which could elevate demand, or could find extra revenue streams if at some point battery technology is licensed for a fee. New technology will continue to be developed over the course of the upcoming decade, and new breakthroughs could happen at any time, so what could seem best-in-class today could be second-best in three years. Hence, betting on batteries could prove dangerous.

However, Tesla might be easily able to scale capacity to the necessary levels to make annual deliveries of 1 million or 2 million models extremely feasible as it continues to build more factories. TTM deliveries have already increased by over 300,000 in nine quarters, so another 300,000 to 500,000 increase as EV adoption and capacity expansion continue through the upcoming twelve quarters might be no challenge. Then, the only challenge would be demand – does the necessary level of demand exist to be able to sell those vehicles? It could. Tesla already has seen growth in market share and could retain that pole position and grow more due to higher levels of capacity relative to OEM manufacturers in China, for example, and easily hit those estimations and, therefore, push valuation and returns higher. Maintenance of 10% market share by 2030 by selling 2 million models annually might be too small an estimate, and rather, Tesla could be valued much higher if it achieves that level of deliveries earlier or obtains a larger market share than 10% by 2030. Upside potential over the long run does exist, but Tesla just needs to keep expanding quite rapidly in order to make that feasible.

Yet the forward-looking picture brings a sense of deja vu. Tesla’s rapid 7-month rally so far mimics the pace and magnitude of that in 2013, with current PS rising to above 16x for the first time since then. PS now is correlated strictly to price (as the rise in shares and the ratio are linked in almost perfect correlation), since sales took a hit alongside the pandemic. This relatively stagnant sales growth (aside from the recent jump in revenues due to a jump in production and deliveries) and dent in recent deliveries isn’t reflected at all by share price; shares are pointing to exceptional future growth again. But that’s still not enough to justify valuation near $400 billion.

Assuming an 8% required growth rate to 2023, which would push market capitalization near $520 billion, Tesla would need to be selling 1.2 million EV annually at an average price of $57,600, similar to today’s prices, to trade at 6x sales. To trade at 8x or 10x sales, a hefty multiple relative to prior multiples, Tesla would still need to sell 770k to 950k vehicles annually, which seems a reasonable achievement to hit, given the current trends in rising deliveries from enhanced levels of production and expanded capacity from new factories. Profitability and free cash flow also contribute to an ability to trade at a higher valuation, but are still tiny in comparison. Until Tesla starts production in its upcoming Gigafactories in Shanghai and Berlin in 2021, and scales capacity significantly higher, shares could be in a long round of consolidation due to the high amount of growth looked to be priced in already. Looking out further over the course of the next decade puts estimated pictures of sales, market share and net income at difficult-to-achieve levels, assuming just an 8% annual growth rate. As that is the case, new investors could find more risk in buying shares now as the requirements for Tesla to grow and justify more growth look daunting.