An article was recently published in the Dutch newspaper Het Financieele Dagblad, the Dutch Wall Street Journal or Financial Times, that is such a beautiful Tesla story that I really have to share it with the readers of Seeking Alpha.

(Readers not familiar with the throat discomfort otherwise known as the Dutch language will need to use Google translate.)

This story has everything for a Tesla bear like me:

In addition to Bios, the article reports that another taxi company is having a similar experience with its 10 Teslas. In addition to major fails with drive shafts and wishbone suspension parts, this company also reports problems with the odometers, which can randomly jump when the cars get an OTA “reset” or they lose internet connection. This could cause major problems with the tax or the taxi authorities, which use odometer data to oversee operations. Tesla’s solution? Their service center has proposed adjusting the odometer readings by hand. This is illegal, so the company has asked Tesla to put it in writing. The response has been crickets.

Finally, since the Dutch have passed a new law facilitating class action lawsuits by consumers, a “Tesla Claim Foundation” has been set up in October to gather complainants. There are currently 200 despite the fact that many Tesla owners, accordingly to the head of the foundation, are afraid to join: “Tesla has the power to stop providing service or block the car remotely. Moreover, all this negative publicity is bad for the resale value of the cars.” In another first for this manufacturer, Tesla may be the pioneer defendant under this law.

Sales based on massive government subsidies for expensive cars. Lots of defects, both in manufacturing and design, including major ones. Sharply deteriorating servicing, with no alternatives. A lawsuit because, unlike with other manufacturers, with Tesla the customer is rarely right. Cars that don’t match their advertised ranges. Insufficient security with OTA updates and connectivity. A Tesla “fix” that is reckless and illegal. Tesla excuses and refusals to respond. A customer returning to a traditional manufacturer because of quality, reliability and customer service.

This is the arc of Tesla in one story. And probably a major reason why, only 80 days after it first went on sale, Volkswagen’s ID.3 has outsold the Tesla Model 3 in Holland for the entire year. And why Tesla’s sales in Holland are down massively this year (although the channel stuffing at the end of 2019 to take advantage of tax subsidies before they declined is also probably a factor).

First it was the highly influential JD Power Initial Quality Study that rated Tesla last in its survey of car owners, with manufacturing defects that were approximately 50% more than the industry average. Right on schedule, the Tesla bulls screamed “pay to play.” But they never really explained how JD Powers could distort the results of a customer survey to benefit certain companies. Or why Tesla, contrary to every other manufacturer, did not allow JD Powers to survey its customers in the 15 states where approval is required.

Then it was Carwow, the influential UK car website, that listed the Tesla Model S among the 15 least reliable cars in the UK over the last 10 years. This result was derived from warranty claims so there was, presumably, no way to distort the results.

But now, in the cruelest cut of all, it is the turn of Consumer Reports, which has just published the results of its 2020 reliability survey. Tesla has come in second-to-last out of the 26 brands studied. And remember that this is an outlet about which Elon Musk has previously tweeted:

Needless to say, Tesla has not refuted CR’s results.

It is important to realize that both the JD Power and CR results come from customer surveys. My strong suspicion is that both of these greatly understate the problems with Teslas. Tesla benefits from a cult customer base, which means that the owners are less likely to criticize the brand than with other manufacturers. In addition, there are strong indications in social media that there is a large overlap between Tesla car and share ownership. How likely are owners to give an negative survey response when their 401(k) is stuffed with Tesla shares? (Anticipating a response from the Tesla bulls, this is also why I am completely unpersuaded by customer satisfaction surveys showing strong support for Teslas among existing owners and often shareholders.)

The Quality Is Bad, But At Least The Servicing Is Worse

Defects and poor reliability are bad enough, but when these are compounded with poor servicing, then hairs must surely being pulled. Yet, this is exactly the combination that Tesla offers in return for an average sales price about $52,000, a figure more than 50% higher than GM’s or Toyota’s.

Mathew Klippenstein, a self-described recovering Tesla fanboy and green energy enthusiast, has written a very amusing blog about Tesla servicing entitled “Tesla Service, From Nirvana to Gehenna.” Matt manages to weave in references to the Roman empire (“Romans shrieked ‘incest’ about their enemies as indiscriminately as Tesla fans cry ‘short-seller’ in the face of legitimate criticism”), Animal Farm, The Beatles and early Christian thinking about the after-life.

The article does two particularly useful things. The first is a drive down memory lane where Matt lists 10 promises that Musk or Tesla have made about improving servicing, going back to 2012. (Tesla bulls will, of course, claim that Musk frequently over-promises about timing but always delivers in the end. Leaving aside the fact that this is clearly untrue with a great many of Musk’s promises – Battery swaps? Ventilators? 1,000,000 Robotaxis on the road by the end of 2020? Never having to raise more capital? etc. – the statement obviously violates the requirement of economist Philip Tetlock’s “Superforecasting” that, in order for any forecast to be meaningful, it must have a date attached to it.)

Matt compares these promises to the descent from Tesla’s servicing “Nirvana” back in 2014, when there were far fewer cars on the road and Tesla was on its best “dating behavior” with customers. He summarizes with the following chart:

A more detailed view of this evolution is provided by a hedge fund manager who tweets as Motorhead (@BradMunchen): 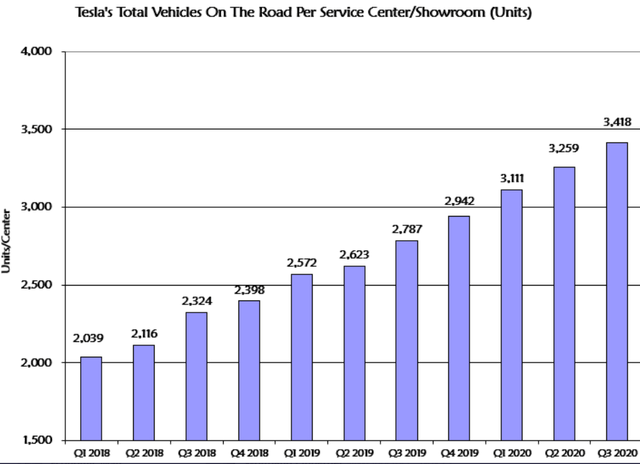 Motorhead estimates that, to get back to the Q1 2018 levels (which is already well out of the “Nirvana” stage of Tesla customer service), would cost Tesla about $3 billion in capital expenditures.

This has not gone unnoticed by Tesla customers. Here, for example, is a video entitled “My Biggest Problem with Tesla: Service and Parts” from Engineering Explained, a YouTube channel run by the quintessential Tesla customer and fan: Jason Fenske. Fenske is in the heart of the Tesla demographic: a techie who is willing and financially able to put up with a lot of daily problems in order to be the first kid on the block with a new toy. Jason still likes his Model 3 Tesla, which he has owned since 2018, but his growing frustration with the delays/unavailability of parts and the over-stretched servicing is obvious.

(See this tweet stream from @GretaMusk if you want to see a compilation of other recent servicing complaints so you will know that it isn’t only Fenske.)

It takes a lot to lose a fanboy like Fenske. But Tesla bulls would be mistaken in believing that they can generally count on his level of loyalty or that there is a large addressable market for techno-masochism. I am old enough to remember when the Detroit manufacturers were nearly destroyed by the Japanese ones in the 1980s and 1990s because – although the Japanese cars were not cheaper, nor higher performance nor more stylish, and they did not benefit from brand loyalty and a strong desire to “Buy American” – they were much better built and more reliable. I am sure that build quality, reliability and customer service are near the top of customer requirements when thinking about buying a car, particularly one as pricey as a Tesla.

None Of This Is An Accident

It is important to realize that none of this is an accident or just an oversight that Elon Musk will get around to rectifying once he has a moment spare from launching rockets or tunneling under Las Vegas.

Tesla’s poor build quality and servicing are a direct result of the fundamentally unprofitable nature of its business and the need to mask this in order to constantly raise new money for the cash incinerator. Tesla designs and builds poor quality cars in a tent, and then rushes to deliver them even with obvious defects like mismatched paint and self-detaching roofs in a ritually comical quarter-end frenzy, because it needs to maintain the growth narrative to keep its stock bubbling. Tesla doesn’t invest in servicing centers or provide high levels of customer service because doing so would depress earnings and cash flow, and thereby also dent its absurd valuation.

Is this short-sighted of Tesla? Of course. But when the alternative is death (or at least a massively plummeting share price), and when you have a flawed servicing model that actively encourages this type of short-sightedness, then it is hardly surprising. It also helps to have cult-like customer base that often pardons this type of behavior, without realizing that they are acting against the company’s long-run interest. What ultimately saved Detroit, and the reason why my 2018 Jeep is the “best car I’ve ever owned” (to quote a popular statement from Tesla bulls who are seemingly always surprised that a brand-new and very expensive car actually exhibits “progress”), is that competition forced the American companies to clean up their acts. Tesla is going in the exact opposite direction, with encouragement from its enablers.

I was somewhat reluctant to use the phrase “Achilles’ Heel” in the title of this article because, aside from this area of the body where his mother held him to dip him in the protective waters of the River Styx, Achilles was otherwise invulnerable. This is certainly not Tesla, which has enough red flags to outfit a May Day parade. But it may be one of the areas where the bubble finds one of its earlier pins.

I am short Tesla with a small part of my net worth on the basis of its massive overvaluation (which has obviously spread to the entire EV sector). Eventually, Tesla’s share price will reflect its deeply flawed fundamentals and clearly broken growth story. I actually believe that this day may be coming soon, with Tesla’s destruction in the competitive European market being the canary in the coal mine (as I said in this earlier article). However, it is impossible to predict when this will happen and since the stock is clearly untethered to any reality, I recommend extreme caution.

Disclosure: I am/we are short TSLA. I wrote this article myself, and it expresses my own opinions. I am not receiving compensation for it (other than from Seeking Alpha). I have no business relationship with any company whose stock is mentioned in this article.

Additional disclosure: I am short Tesla through outright shorts and long-dated puts.