Tesla is set to join the S&P 500 index of leading US stocks next month, with the announcement on Monday sending the electric car maker’s shares up 13 per cent in after-market trading.

Admission to the benchmark, to take effect with the quarterly rebalancing on December 21, comes almost three months after Tesla first qualified to join the S&P 500, potentially adding to demand for its shares from new investors who track the index.

The stock rose earlier this year as investors anticipated its elevation to the index, only to retreat after S&P Dow Jones Indices passed on it over in several index reshuffles.

The late-Monday bounce added more than $50bn to the electric carmaker’s stock market value and put it back within 8 per cent of the record hit in August after an intense rally.

The news stamps an official stock market imprimatur on the company that has done more than any other to bring electric cars into the mainstream, and caps an eventful three days for Elon Musk, its chief executive.

Mr Musk, who has repeatedly argued that fears about Covid-19 are overblown, also said over the weekend that he “most likely” had a “moderate case” of the disease.

The fact that Tesla has relied heavily on the sale of regulatory credits to achieve four quarters of accumulated profits — one of the requirements to join the S&P 500 — raised uncertainty about whether the committee that oversees the index would grant admission.

Tesla has said that profits from credits, which do not reflect the performance of its underlying business, are expected to fall away in future.

Tesla earns the credits by selling electric vehicles, and then makes money by selling them on to other companies that do not meet regulatory requirements for making EVs of their own.

In the first half of 2020, it would have reported a loss had it not been for the credits. But a third-quarter profit surge pointed to stronger underlying performance.

The index committee has moved slowly in the past to take in companies whose shares have soared in value, particularly when the euphoria is tied to a new technology. It was criticised for not acting more quickly during the tech boom of the late 1990s. 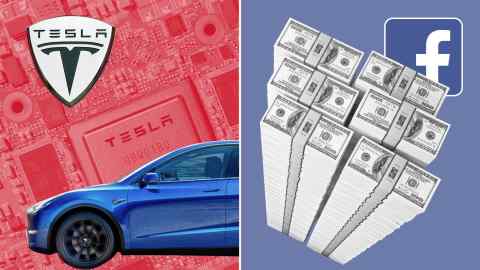 Tesla’s huge stock market value — which stood at $387bn at the end of official trading on Monday, larger than all but nine S&P 500 stocks — could cause extra volatility in the index next month, given the scale of potential demand from passive investors who might need to buy the stock.

By comparison, the three companies that were admitted to the S&P 500 in a September reshuffle when Tesla missed out — Etsy, Teradyne and Catalent — are worth only a combined $50bn.

S&P said it would seek feedback from investors about whether it would be better to add Tesla to the index in one instalment on December 21, or in two tranches ending on that day.