Elon Musk laid out ambitious technical plans on Tuesday that he claimed would cut the cost of Tesla’s batteries by more than half and put the company on course to make an electric car priced at $25,000, on par with traditional internal combustion engine vehicles, in about three years.

The closely watched battery plans included a deeper level of vertical integration that will take the electric car maker into all stages of manufacturing its batteries, including processing the raw materials and even buying lithium deposits still in the ground.

The unveiling of the plans followed months of anticipation among Tesla’s growing army of stock market bulls, fed by Mr Musk’s promises of groundbreaking advances.

However, Tesla’s stock dropped by 7 per cent in after-market trading on Tuesday, taking some of the heat out of the shares after a frenzied rally in recent months. The stock had already fallen by 5 per cent earlier in the day after Mr Musk warned of “the extreme difficulty of scaling production of new technology”.

Wall Street analysts and battery experts largely applauded the battery plans, though views differed on how significant the developments would be in enabling Tesla to maintain its long-running advantage over rivals in terms of efficiency and cost.

“It’s insane innovation,” said Pierre Ferragu, an analyst at New Street Research. “They’re demonstrating they’ve got a path to maintain their lead for the next decade.” Tesla was so confident others could not catch up that it had taken the unusual step of being completely open about its technical plans, he added. 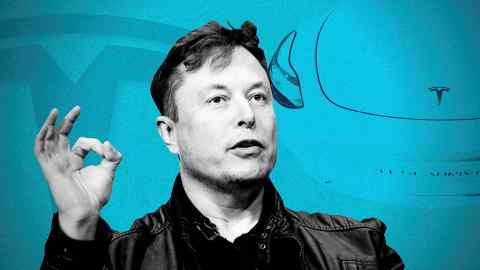 Other analysts said some of the technical leaps claimed by Tesla were less groundbreaking. The changes to the chemistry in its batteries — such as using more silicon in the anodes and reducing the amount of cobalt in the cathodes — mirrored efforts under way at other companies and were only “incremental”, said Gene Berdichevsky, who worked on the battery pack for Tesla’s first vehicle.

However, Mr Berdichevsky added that other steps the company was taking would have a bigger impact and showed off one of its main strengths — “using engineering to drive down the cost of manufacturing”.

Speaking after Tesla’s annual shareholder meeting, Mr Musk said significant battery breakthroughs would be needed to tackle climate change. The decline in the cost curve that had brought electric cars closer to the mainstream “has been somewhat flattening out”, he said. “Good things are happening; we just have to go faster.”

Tesla already makes the battery packs for its vehicles, and on Tuesday Mr Musk outlined a plan to go deeper into the technology by also making its own cells — the basic units in batteries which are packaged together in large numbers to create the final product.

Though it will still buy cells from its supplier Panasonic, Mr Musk said the need for huge volumes of cells and the necessity of slashing their costs had forced Tesla to also design and make its own.

“We’re not getting into the cell business for the hell of it; it’s because it’s the fundamental constraint,” Mr Musk said. He said Tesla would consider selling its cells to other battery makers in future, though only when it was able to produce more than it needed.

Tesla said it had designed new manufacturing techniques for its cells, modelled on bottling plants and paper mills, that would increase the output of its production lines seven-fold, reducing the capital needed to build new capacity as it expands.

However, Mr Musk warned the company still faced big hurdles as it tried to scale up the new manufacturing techniques. One important process — a method of making anodes called “dry coating”, which removes the time-consuming and expensive need to dry the components in giant ovens — was still having teething problems a year after Tesla acquired it, he said.

Techniques that Tesla had been working on for years had contributed to many of the advances outlined on Tuesday, and underlined how hard it would be for other car companies to catch up, Mr Ferragu said. These included a method for charging new batteries, and a new way of building a car by casting it in three parts, with the two ends joined by a battery pack acting as a structural element in the middle of the vehicle.