Tesla Gets Crushed in Germany by EVs from Volkswagen, Renault, and Hyundai Group: It Woke Up the Giants

Home Financial news Tesla Gets Crushed in Germany by EVs from Volkswagen, Renault, and Hyundai Group: It Woke Up the Giants
2020-08-102020-08-10By finanz.dk

Tesla’s share of the EV market plunged to 8.7% year-to-date, from 18.4% last year. Competition is now huge and across the spectrum. Tesla faces the same situation globally.

It has been a very ugly year in Germany for auto sales, except for EVs. The overall new vehicle market in Germany has plunged by 30% in the first seven months of 2019 to 1.526 million units. But EV sales have skyrocket by 65% over the first seven months, after having already skyrocketed by 88% in the same period in 2019, according to KBA, the German agency that handles nationwide new-vehicle registrations. Year-to-date, 61,105 EVs were sold, giving EVs a share of 4% of total new vehicle sales, up from less than 1% in 2018.

But Tesla got crushed. Its sales over the seven-month period fell from 6,816 in 2019 through July to 5,306 over the same period this year, and its share in the EV market plunged from 18.4% to 8.7%. There are now three automakers that blew past it in Germany – Volkswagen Group, Renault, and Hyundai Group – while Daimler Group came in even with Tesla, and BMW group wasn’t far behind. This chart shows market share of each automaker, with all their EV brands and models combined: 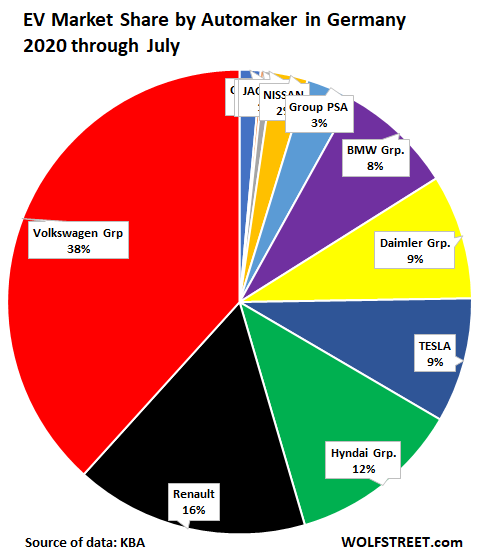 By Automaker: The table shows registrations by automaker, each with all their EV makes and models combined, in July and year-to-date through July, in order of their share of the total EV market (right column).

By major brand: The table below splits out the major brands of each automaker that offer EVs. So, Volkswagen Group has five brands with EVs on this list: VW, Audi, Skoda, Porsche, and Seat. BMW Group has two brands on the list: BMW and Mini. Daimler Group also has two brands on it, Mercedes and Smart, as has Hyundai Group, Hyundai and Kia. In this lineup, Tesla is in third place, behind the brands VW and Renault. There are still a bunch of major brands that do not offer EVs in Germany, including Toyota, and those are not on the list:

Tesla is now in the process of building an assembly plant in Germany. But by the time it is up and running, more of the other major automakers that currently don’t offer EVs in Germany will offer them. And the giants with their numerous brands are gearing up to offer a whole spectrum of vehicles, across all categories and price classes.

To Tesla’s credit, it shook up the German automotive industry that for years had pooh-poohed EVs in favor of internal combustion engines, particularly diesels. Volkswagen Group was so focused on diesels that it couldn’t even see EVs.

But the fallout from the diesel-emissions-fraud scandal, which continues to fester in the German court system, has changed that. Consumers are turning away from diesels. And for automakers, EVs are the only major segment that is red hot, even during the pandemic. It’s where growth is. What Tesla accomplished was that it woke up the giants. And now they’re going after this market with all their might.

Tesla is facing the same situation globally: The giants have woken up and many of them are now offering or will soon be offering models across the spectrum, and Tesla has to get down in the trenches with them and compete on price, service, quality, reliability, and all the other mundane factors that regular consumers – not true believers – demand. And it’s going to get very tough.