Ternium S.A.: Dividend Suspension May Lead Us To Lighten Up Position (NYSE:TX)

As we stated in a recent article, we increased our position in Ternium (TX) in the first quarter. We had multiple reasons for doing this, such as the very keen valuation and the generous dividend on offer. In just over a month, the second tranche of shares we bought are up just over 11% as shares are now trading at approximately $15.60.

EBIT came in at $135 million in the first quarter which meant that the company was forced to report a loss in EPS due to the $189 million non-cash deferred tax loss as a result of unfavourable Mexican Peso forex headwinds.

A more attractive figure further up the income statement in the first quarter was the company’s EBITDA which came in at an impressive $302 million. Management stated on the first-quarter earnings call that they were actually projecting a better number here. However, due to strict lockdowns in Colombia and Argentina, shipment numbers suffered in the first quarter despite the fact that the firm had orders on hand.

Operating in such an open industry, Ternium will need volumes to remain elevated in order to compensate for the drop in the price per ton. Although, for example, volumes increased sequentially in the first quarter, revenue decreased by 2% per ton.

We have stated before why Ternium is our principal pick in the steel sector. It is at precisely these times (when demand and price subsided) that the best operators invariably come to the fore. However, to protect the firm’s balance sheet and liquidity position, management took the unusual step of suspending the annual dividend. This obviously has ramifications for our long-term investment which we will now get into. 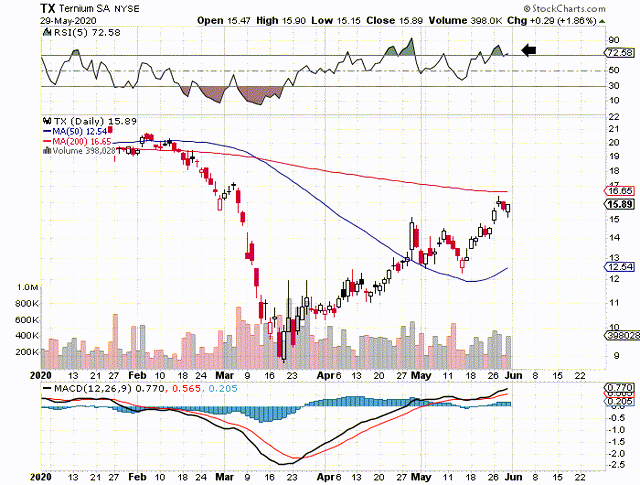 First off, with respect to any long-term investment, the role of the dividend is always key for us. The reason being that dividends have accounted for close to 50% of the return of the S&P 500 over the past century. We appreciate the reasons management have given for suspending the payout, but usually, any type of cut or suspension means a sell for us with the respective position at hand.

Considering, though, how the world has been literally turned upside down over the past 3 months, we have seen even the most financially sound companies adopt similar measure due to a complete lack of demand. Therefore, due to the exceptional circumstances, we can return to Ternium’s story and see how fundamentally strong the firm was coming into this crisis.

From a profitability standpoint, for example, although the firm’s gross margin (16.1%) has dropped pretty significantly in recent times, the company still managed to generate $1.6+ billion in operating cash flow over the past 4 quarters. $443 million of this figure actually came in the first quarter. Although we will most likely see a decline in this number in 2020 compared to the past few years, the number is still elevated which demonstrates strong profitability.

Despite, for example, the negative net profit number in the first quarter this year, the healthy operating cash flow print shows that the firm can still easily afford the dividend if it wanted to. The $665 million of depreciation and amortization added to net income over the past four quarters demonstrates the significant non-cash expenses which are present on the income statement but added back to net profit on the cash flow statement.

Elevated cash flow means Ternium’s operating cash flow currently comes in at ultra-low 1.93 which is very attractive. Shares are trading at a book multiple of 0.48 and a sales multiple of 0.32. Whether one either compares these figures to Ternium’s long-term averages or the industry averages, they remain dirt-cheap.

The last pillar we use when decoding potential value plays is how much capital management returns to shareholders over time. Not just considering the recent dividend suspension but also the fact that management has not undergone any type of significant buybacks over the past while is a bone of contention for us. Remember, the dividend was traditionally paid out in 12-month intervals which meant compounding took place at a slower rate than normal.

Therefore, to sum up, although we may not totally liquidate our position here, we may downsize it to about what it was before last April. Ternium still has a lot going for it and shares remain dirt cheap despite the recent run-up. Let’s see what the second quarter brings.

Disclosure: I am/we are long TX. I wrote this article myself, and it expresses my own opinions. I am not receiving compensation for it (other than from Seeking Alpha). I have no business relationship with any company whose stock is mentioned in this article.