Taylor Wimpey is a housebuilder operating in the U.K. model, of buying up plots of land at various locations across the country and, subsequently, building out estates on them. They also have operations in Spain.

The company has been growing revenues and profits overall in recent years, with another strong performance last year.

In principle, this seems like a decently well-run housebuilder with a strong land bank and a well-established business model. However, I feel rather nervous about how it will be affected first by lockdown and then, more worryingly, any downturn in U.K. property prices or contraction in the property market.

Lockdown Has Impacted This Year

The company has now reopened most of its sites and is selling again, with staff back from furlough, as per its recent trading update. It also says that its “Order book remains strong with a healthy increase in reservations made in recent weeks”.

However, having downed tools on its sites for several months, the company’s revenues this year will inevitably take a hit regardless of what happens in the remainder of the year. The company has stated that total group completions (including joint ventures) in the 22 weeks to 31 May were 2,455 versus 4,052 the prior year, a fall of 40%. The net sales rate has also fallen steeply, at 0.72 for the five months to 31 May versus 0.99 for the equivalent prior period.

The order book is higher than last year and the cancellation rate is a little lower, so the outlook sounds rosy based on the company information. However, in the wider market, there are clear warning signs of a housing downturn. Taylor Wimpey’s positive outlook contrasts with that of market surveys, with the third month in a row showing price declines. These surveys tend to include the whole market, whereas the company does only newbuild homes. Still, there are grounds for pessimism about U.K. housing prices and I don’t share the company’s upbeat outlook. We still don’t know the longer-term impact of lockdown and an economic recession, but I expect they will act as a downward pressure on home prices.

The Company is Strengthening its Finances

I feel the company was a little slow out of the blocks in tightening its belt after lockdown. For example, on 1 April, it announced executive pay changes:

While better than nothing, these felt a bit tokenistic to me. I also note with interest that the company has continued to investigate new land purchases, seeking to take advantage of market dislocation. While that can be seen as a shrewd long-term strategic move, it strikes me that the company isn’t racing to conserve capital the way some of its peers are. Barratt (OTCPK:BTDPF, OTCPK:BTDPY), for example, has suspended all land buying.

The company touts its strong balance sheet as one of the five points in its investment case.

Consistent with this, the company announced at the time of its AGM (23 April) that it had a “strong balance sheet and cash position” – c.£836 million in cash, although that was after fully drawing down its £550 million revolver. However, less than two months later, in June, the business did a new capital raise, which was fully subscribed and brought in approximately £515 million gross. The placing was at 145p.

The company directors all participated in the raise. 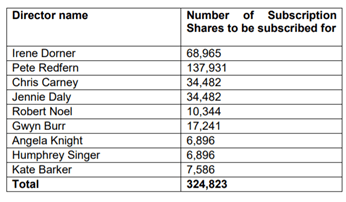 The fact that the directors are willing to invest is a positive indicator of sorts, albeit in most cases, the sums involved, while not negligible, are not that big. But the main question is, if the company had such a strong balance sheet in the second half of April, why did it go to the markets in the first half of June?

For now, to conserve cash during the pandemic, the dividend is suspended, saving a planned outflow of £485 million.

The total dividend last year was 18.3p, covered narrowly, so if that dividend is achieved again even several years hence, the forward yield at today’s share price of 143p would be a tasty 13% or so. That makes the shares sound attractive to patient yield hunters.

The challenge is that the building business in the U.K. is highly cyclical and there is likely a lot of difficulties to be navigated before the business is again in a position to payout dividends at last year’s rates.

The last financial crisis provides an instructive reminder on that front. In April 2007, the company was trading at 705p. By November 2008, it was less than 13p, a loss of over 98% in the shares’ value. Taylor Wimpey doesn’t make annual reports pre-2015 available on its website, interestingly, but the company went through a near-death experience in that downturn and indeed the recent placing price is still just a little over one-fifth of the high point the shares had traded at back in 2007.

Conclusion: Company’s Optimism Yet to Be Vindicated

Taylor Wimpey despite touting its strong balance sheet has already tapped the markets, and its shares remain a fraction of what they were going into the last financial crisis. Despite an attractive forward yield if prior dividend levels are restored, there is a lot of risk here based on variables in the fundamentals of the U.K. house market, for now, I would sell.