The rapid spread of the COVID-19 pandemic in the U.S. over the past month has upended nearly every industry. In retail, few companies have been spared from the carnage.

Target (TGT) certainly hasn’t been immune to the effects of COVID-19. Last week, the company withdrew its guidance for the first quarter and full year in light of increasing volatility related to the pandemic. That said, Target has weathered the storm quite well thus far, as it has become a go-to retailer for stock-up trips. COVID-19 certainly doesn’t pose an existential threat to Target, and in the long run, it could actually improve the discounter’s market position.

Nevertheless, Target stock has lost about a quarter of its value this year, underperforming the S&P 500, with the bulk of those losses coming since Feb. 20. This selloff has created a great buying opportunity for long-term investors.

Momentum was slowing a bit

The main reason why Target stock has underperformed the S&P 500 year-to-date is that the company’s holiday-season performance missed expectations. On Jan. 15, Target reported that comp sales rose just 1.4% for the November/December period, due to subpar sales in electronics, toys, and parts of the home category.

That said, Target continued to shine in the apparel and beauty categories. Those high-margin offerings posted 5% and 7% comp sales gains, respectively, during the holiday period. As a result, the retailer was able to post adjusted EPS of $1.69 for the quarter: up 10.6% year over year. This was near the high end of its guidance range, even though Target missed the midpoint of its comp sales guidance by 2 percentage points.

For the full fiscal year, comparable sales rose 3.4% and adjusted EPS surged 18.6% to $6.39. The company’s initial outlook for fiscal 2020 was more modest, though, calling for a low single-digit comp sales gain and adjusted EPS of $6.70-$7.00: up a little more than 7% year over year at the midpoint.

Not surprisingly, the COVID-19 pandemic has made this outlook obsolete. During the first three weeks of fiscal 2020, Target’s results were in line with management’s expectations. However, sales trends strengthened in late February. For the month as a whole, comp sales rose 3.8%, according to the company.

Traffic and sales surged further around the middle of March, as consumers across large swaths of the U.S. began stocking up for long stays at home. In the first three and a half weeks of March, comparable sales for Target’s essentials and food & beverage categories (which typically account for nearly half of Target’s sales) surged more than 50%. Sales trends in the home office and entertainment categories also strengthened in March.

On the flip side, Target has seen comp sales plunge by more than 20% in apparel and accessories, as customers have pivoted away from discretionary purchases. These high-margin categories grew strongly in 2019 and accounted for 18.5% of Target’s sales mix last year. 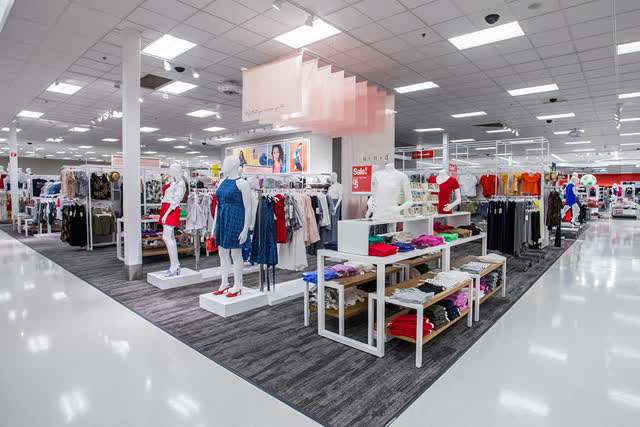 The net result of these abrupt shifts in its sales trends is that Target’s comp sales increased by more than 20% in the first three and a half weeks of March. While the mix shift towards lower-margin categories like food and essentials will lead to lower gross margin as a percentage of sales, total gross margin dollars have increased more than expected on a quarter-to-date basis.

This doesn’t necessarily mean that Target will beat its earnings guidance, though. For one thing, the company expects costs to exceed its prior estimate for the quarter by more than $300 million. For example, Target has temporarily raised wages for all hourly store and distribution center employees by $2/hour, it is offering up to 30 days of paid leave to employees in at-risk groups, and it has increased labor hours to clean its stores more frequently and more thoroughly.

Additionally, sales trends will probably deteriorate meaningfully in April, as most people have already “stocked up” now. Furthermore, a lack of “stock-up” traffic could drive an even steeper sales downturn in apparel and accessories.

Target can withstand the short-term pressure

Despite the big March sales surge, it seems likely that Target will miss its previous Q1 earnings guidance due to increased costs and a possible April sales slowdown. Indeed, over the past week, the analyst consensus for Target’s Q1 EPS has declined from $1.66 to $1.59. The full-year consensus has fallen from $6.85 to $6.65.

However, as the company disclosed, “there is an unusually wide range of potential outcomes for Target’s first-quarter financial performance.” That’s even more true for Q2. Target’s status as an essential retailer guarantees it at least some decent baseline of sales, but beyond that, it depends on when people start returning to “normal life” and how much the COVID-19 pandemic has damaged consumers’ finances. It wouldn’t be especially surprising if full-year EPS ended up $1 or even $2 below Target’s initial guidance.

Nevertheless, it’s clear that the pandemic doesn’t represent an existential threat for Target, as the retailer’s strong position in household basics continues to support its business in discretionary categories. Of course, the steep declines in apparel/accessories sales right now will surely lead to big end-of-season markdowns. Yet Target’s situation is dramatically better than the plight of most apparel retailers, which have been classified as non-essential and forced to close their stores, leaving just a trickle of online sales. 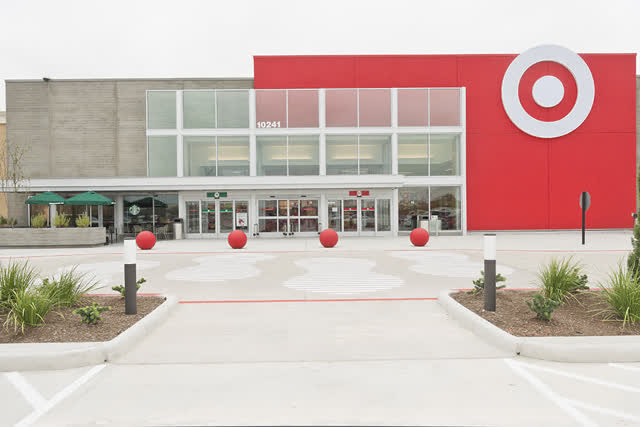 Just to be sure, Target is shoring up its balance sheet. It has suspended share repurchases and recently issued $2.5 billion of debt at a weighted-average yield below 2.5%. This new debt issuance should more than cover Target’s potential lost income from COVID-19, enabling the company to resume its buyback program when conditions stabilize.

Target’s market cap has fallen by about $13 billion since the threat of a pandemic first came into focus in February. This seems like a big overreaction. While COVID-19 may reduce Target’s income in the short term, as described above, the retailer is almost certain to remain solidly profitable this year.

Looking a little further out, the story is even better. Some investors may be worried that the U.S. economy could fall into a long recession, but Target would be relatively insulated from harm in such a scenario due to its value orientation. Lost sales from consumers reducing spending would be partially offset by market share gains as other consumers trade down from pricier retailers.

And in the long run, the COVID-19 pandemic could actually be beneficial for Target. Pure-play apparel and home retailers that have been forced to close their stores throughout the pandemic will take a massive financial hit this year. This will hurt their ability to invest in their businesses, and some of Target’s rivals will ultimately need to downsize or shut down entirely.

Investors should be prepared for more volatility in the weeks ahead. But with Target stock trading for approximately $93 (less than 15 times trailing earnings), this is a great time for long-term investors to pick up shares of this rock-solid company.

If you enjoyed this article, please scroll up and click the follow button to receive updates on my latest research covering the retail, real estate, airline, and auto industries.

Disclosure: I/we have no positions in any stocks mentioned, but may initiate a long position in TGT over the next 72 hours. I wrote this article myself, and it expresses my own opinions. I am not receiving compensation for it (other than from Seeking Alpha). I have no business relationship with any company whose stock is mentioned in this article.