U.S. West Texas Intermediate crude oil futures are set to close lower for the week as demand concerns continue to outweigh rising geopolitical tensions in the Middle East. Furthermore, the OPEC-led supply cuts remain in place and the cartel and its allies are close to approving an extension of this move to offset production, trim the excess global supply and stabilize prices. However, this news has not been able to stop the selling pressure or shift the bearish investor sentiment.

Government trading data confirms this assessment with the Commodity Futures Trading Commission (CFTC) showing hedge fund managers continued to liquidate long positions at the fastest rate since the fourth quarter of 2018 due to rapidly increasing fears about a global economic slowdown.

Although there was a spike to the upside in reaction to the attacks on two tankers in the Strait of Oman, the trade this week was mostly dominated by worries over rising U.S. stockpiles and lower global demand.

The U.S. Energy Information Administration (EIA) on Wednesday reported crude stockpiles rose unexpectedly for a second week in a row, climbing 2.2 million barrels the week ending June 7. Traders were looking for a drawdown of about 481,000 barrels.

U.S. stockpiles now stand at 485.5 million barrels, the highest level since July 2017. This is 8% above the five-year average for this time of year.

Selling pressure was also fueled by a report from the U.S. Energy Information Administration (EIA) that showed a forecast for weaker 2019 world oil demand growth and U.S. crude production.

“Demand-side concerns became the most salient issue during the past month and contributed to volatility and price declines for risk assets such as commodities and equities,” EIA said in its Short-Term Energy Outlook.

The report went on to say the US/China trade conflict, potential US tariffs on Mexico and lower industrial activity have contributed to concerns “that economic growth could be lower than market participants’ expectations, which would cause oil demand growth to also be lower than expected.”

Sellers also responded to another report from experts, calling for lower future demand. The International Energy Agency (IEA) cut its demand growth forecast for 2019 by 100,000 barrels per day (bpd) to 1.2 million bpd, due to worsening prospects for world trade. However, this news was somewhat softened after the IEA said demand growth would climb to 1.4 million bpd for 2020.

On Thursday, OPEC cut its 2019 forecast for growth in global oil demand even lower than the IEA, to 1.14 million bpd.

China’s industrial output growth slowed to a more than 17-year low of 5% in May, well below expectations, in the latest sign of weakening demand in the world’s second-largest economy as the United States ramps up trade pressure.

Oil prices jumped on Thursday, reversing the previous session’s weakness after two tanker ships carrying refined petroleum products were attacked in waters close to Iran. Since there was no major supply disruption or an escalation of military activity in the region, the short-covering rally fizzled and there was no follow-through to the upside on Friday.

The story is not about the two tankers that were attacked, it’s about the one-third of all global seaborne oil ships that travel through the Strait of Hormuz where the attacks occurred. Therefore, we may continue to see attacks, but until there is a military response to the news, which would lead to actual supply disruptions, any gains are likely to be limited. Over the long-run, a direct U.S.-Iran conflict would likely lead to the shutdown of the Strait of Hormuz. This poses a higher risk of oil-supply disruption, which could lead to sharply higher prices. 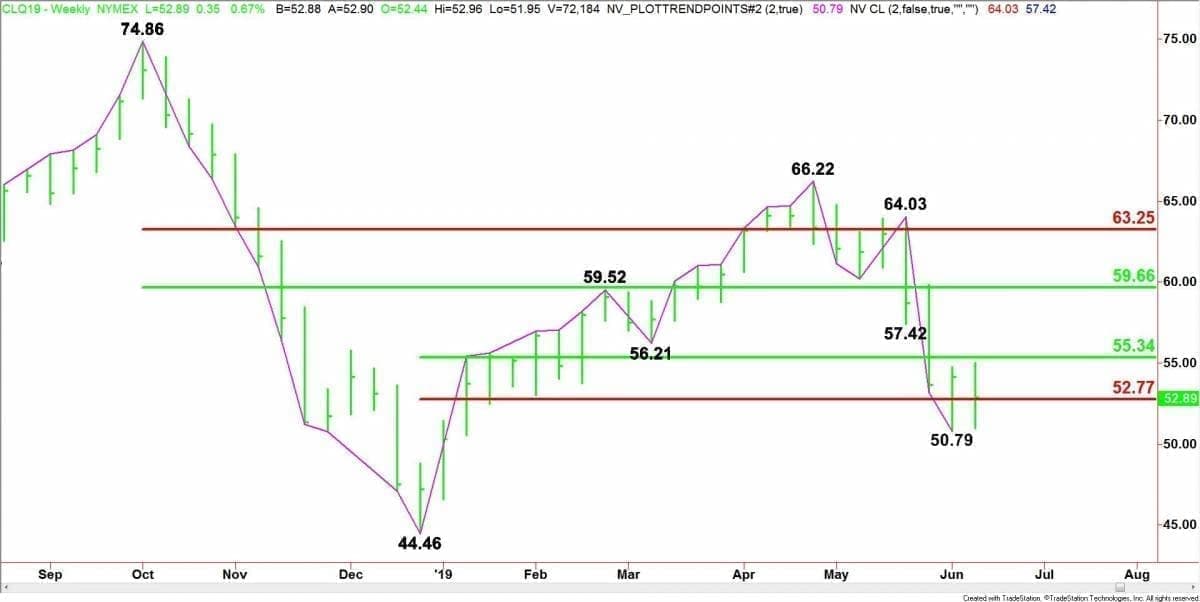 The main trend is down according to the weekly swing chart. A trade through $50.79 will signal a resumption of the downtrend. If this move creates enough downside momentum then look for the selling to possibly extend into the next main bottom at $44.46 over the near-term.

The market is in no position to change the main trend top up, but due to the prolonged move down in terms of price and time, it seems the only chart pattern that could trigger a near-term short-covering rally would be a closing price reversal bottom.

Based on this week’s price action, the direction of the August WTI futures contract next week is likely to be determined by trader reaction to the short-term Fibonacci level at $52.77.

A sustained move under $52.77 will indicate the presence of sellers. This could lead to a retest of the minor bottom at $50.79. Look for a potential acceleration to the downside if this level fails. The next major target is the $44.46 bottom from the week-ending December 28, 2018.

A sustained move over $52.77 will signal the presence of buyers. If this move generates enough upside momentum then look for a possible test of the short-term 50% level at $55.34. This is a potential trigger point for an acceleration to the upside with the next target the main 50% level at $59.66.

Previous PostUS economy: the Fed tries to predict politicsNext Post“The US Is On Course To Test Just How Much It Can Borrow”