TAN: Crash In Fossil Fuel Prices To Cause Another Solar Bear Market (NYSEARCA:TAN) 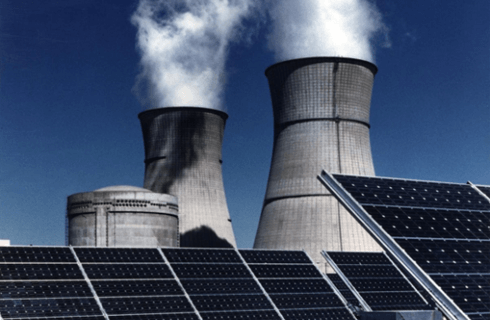 Decades from now, I hope that solar power and other renewables are the dominant sources of energy. This is a hope that many have as it will be the only way to maintain our standard of living and environment in the face of declining non-renewable natural resources. It is this hope that has fueled an era of environmentally-oriented investors who aim to use their capital to usher in that age.

However, the laws of economics still apply. In a free market, solar manufacturing companies must compete with fossil fuels which are extremely cheap today. Both crude oil and natural gas are at 1990s’ prices, so cost savings from solar is extremely low. While it is certainly altruistic to invest in solar, that does not mean solar is a good investment.

In fact, there is actually a relatively strong correlation between Google Trends search volume for “Solar Panels” and U.S energy prices (i.e. Energy CPI). See below: 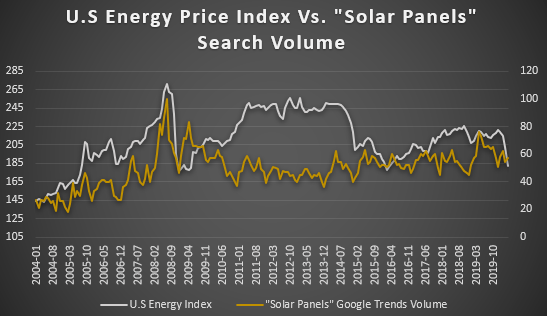 Obviously, the correlation is imperfect but we can see a general relationship between the two. Most notably in the major spikes. When energy prices were skyrocketing during the 2000s, interest in solar panels rose with it. In 2008, crude oil made its long-term peak as did most fossil fuels. Since then, energy prices have been generally stagnant and have recently fallen into considerable decline.

As in 2008, I believe the decline in energy prices and people’s/companies’ financial wherewithal will bring solar sales lower. During the last recession, this led to a disastrous 90%+ sell-off of the Solar ETF (TAN). I doubt losses will be so great today, but looking at valuations, a 50%+ decline is certainly feasible.

TAN invests in U.S and overseas companies that are in the solar energy industry. This includes solar technology companies which make up about half of the fund, solar utility companies, and manufacturers. Companies in TAN range from $7B like Enphase Energy (ENPH) to many small-cap solar producers overseas.

The fund only holds 23 companies so it is relatively easy to analyze. It has a moderate expense ratio of 71 bps and pays a small dividend yield of 29 bps. TAN also has a weighted average “P/E” ratio of 26X which is high, though its forward “P/E” is much lower at 14X. This means that analysts currently have very high growth expectations for the companies. Given low energy prices today as well as COVID-19, I have doubts this growth will occur.

Valuations range significantly across the companies with some being richly valued and others appearing deeply undervalued. As you can see below, the top three companies in the fund Enphase, SolarEdge (SEDG), and First Solar (FSLR) have extremely different valuations:

The general pattern is the more technologically-oriented the company, the higher is its valuation. Enphase and SolarEdge are certainly in this category. On the other hand, manufacturers like First Solar and Canadian Solar (CSIQ) have very low valuations (CSIQ’s forward “P/E” is only 7.8X). Still, the decline in energy prices and COVID-19 supply chain issues is likely to hit manufacturers the hardest.

Financial health also varies significantly from company to company. Some are over-levered and/or have insufficient cash reserves, others have great financial health. This is shown below in the Altman Z-Score of TAN’s U.S-listed (including ADRs) manufacturing and technology companies:

In general, figures below 2 indicate poor financial health and those below 1 indicate high bankruptcy risk. This score is based on a variety of measures including working capital, leverage, and retained earnings. Once again, the disparity is tied to manufacturing dependence. The high valuation tech-driven companies have low leverage and strong cash. The manufacturers like Canadian Solar, SunPower (SPWR), and China’s Daqo (DQ) have extremely poor financial health.

Additionally, residential solar providers that perform installation and lending/leasing contracts to customers have poor health. This includes Sunrun (RUN) and Vivint (VSLR). As you can see below, both of these companies have become extreme cash burners with rising leverage over the past two years:

Both will also likely take a significant COVID-19 sales hit that will be extended due to poor energy price economics and a possible decline in consumer credit. Quite frankly, I believe these two companies are likely the best overall short opportunities within the ETF. They will struggle with sales, supply chain, poor cash flow, high leverage, and high stock valuations. Otherwise known as a “perfect storm.”

The common thread between these diverse set of companies is that they will all be negatively impacted by COVID-19 and low energy prices. Most will see a significant decline in revenue this quarter as sales and installations decline (both residential and commercial). I expect a recovery to take years since electricity prices are expected to continue to crash this year due to extremely low coal, natural gas, and petroleum prices.

This is a time when people and companies are looking to save money which is no longer possible by switching to solar. There is also the coming decline of the federal solar tax credit which will be phased out by 2021.

I agree that in the long run, solar companies will rise. However, the current economic environment does not favor an increase in solar use. Most solar companies are priced too high given these poor prospects. Over the coming months, I believe TAN is headed lower likely by 50% or more which would give its holdings a more reasonable TTM “P/E” valuation of 13X. However, those interested in making a short trade are likely better off with VSLR or RUN since they appear to be at the greatest risk.

My fellow contributor BOOX research and I run the Core-Satellite Dossier here on Seeking Alpha. The marketplace service provides an array of in-depth portfolios designed using the academically-backed Core-Satellite approach. This involves creating a base long-term portfolio (the core) and generating alpha using unique well-researched tactical trades (the satellite).

Disclosure: I/we have no positions in any stocks mentioned, but may initiate a short position in VSLR,RUN over the next 72 hours. I wrote this article myself, and it expresses my own opinions. I am not receiving compensation for it (other than from Seeking Alpha). I have no business relationship with any company whose stock is mentioned in this article.