The restaurants as a group have been absolutely fascinating since the pandemic struck earlier this year. Obviously, there were winners and losers from the pandemic as dining rooms were shut (and remain as such in some cases), and convenience became the name of the game. Some chains have thrived under these conditions, while others that rely upon the in-person dining experience have struggled in a lot of cases.

High-end restaurant chain Ruth’s Chris (RUTH) saw its shares completely decimated earlier this year as the combination of high-end dining and reliance upon dining rooms being open wasn’t exactly attractive during the sharpest economic contraction in the history of the US, and a pandemic. However, since that time, the stock has rocketed higher and continues to make its run back to pre-COVID highs. 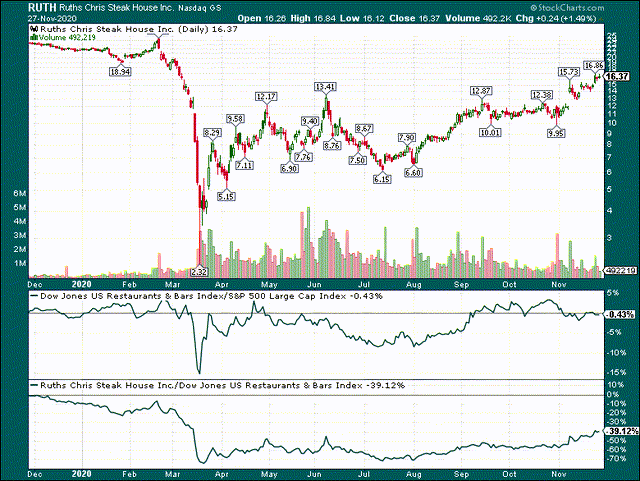 Taking a look at relative strength, we can see that the restaurants as a group have performed more or less in line with the S&P 500 in the past year. Ruth’s Chris, on the other hand, has vastly underperformed its peer group in that time frame, ceding 39% to its peer group. However, since July, Ruth’s Chris has gained about 30% against is peer group, rallying from $6 to $16 in that span. Does that mean the outperformance will continue? In this case, I’m too cautious to make that call; permit me to explain.

Growth will take some time to return

Ruth’s Chris was on a nice growth path before the pandemic hit. The company had posted years of consecutive, strong revenue growth performances, as you can see below.

The problem is that Ruth’s Chris is essentially completely reliant upon the dine-in experience given that a dinner that costs $100+ per person isn’t generally something you’d get delivered, or carry away. Ruth’s Chris says in its mission statement it wants to provide the best guest experience, which is something you cannot do with the dining room closed.

Thus, it makes sense revenue would plummet this year, so I won’t necessarily spend any time there. What I’m interested in is the rebound, and as we can see above and below, expectations for 2021 are very high in my view, which may make it difficult for Ruth’s Chris to live up to them.

Revenue is expected to rebound from $286 million this year to $374 million next year, a gain of ~30%. While it makes logical sense that the company should see a return in revenue, given the uncertainty around a vaccine being approved, consumers’ willingness to take it, logistical issues around distribution, etc., I have a hard time believing a chain like Ruth’s Chris will simply pick back up and return to growth. If dining rooms are only allowed to operate at half capacity (as an example), or aren’t allowed to open at all, Ruth’s Chris is in a lot of trouble in terms of revenue growth, because it doesn’t have the digital channels, convenience, or value proposition of the winners in the restaurant group.

However, analysts currently expect a rebound in comparable sales of 51% for next year, following the 37% decline forecast for this year. If these numbers prove true, Ruth’s Chris’ indexed comparable sales for 2021 would be ~94% of 2019 levels, so a complete rebound in comparable sales isn’t quite expected for next year. However, given the circumstances, I’m not sure 94% of normalized levels is reasonable to expect for a chain that operates firmly in the old style of dining where convenience, value, and social distancing don’t matter.

That’s not the only problem I see, however; margins have been declining for years and the current expectation for next year is only about half of a normalized year for Ruth’s Chris.

I’m using earnings before taxes as my preferred measure for margins, although several versions of operating margins are available. EBT was over 12% of revenue a few years ago, but came in at just 11% last year. This year, all bets are off and EBT is expected to be -6.5%, but next year, even with an enormous rebound in revenue, it is only expected to be 6.5% of revenue.

While I don’t doubt margins will rebound higher next year, if we assume Ruth’s Chris can hit 6.5%, it has a very long way to go to reach normalized levels. That’s important because it cannot return to former levels of earnings without margin reflation, and given the issues I’ve described here, I hesitate to say margin reflation is a given. In fact, I think Ruth’s Chris will struggle to rebuild revenue to the point where margin reflation is even a possibility, let alone an eventuality.

The stock is pricing in too much

Given all of this, it appears to me that investors have become a bit too excited about the stock, and that it is pricing in too much of a recovery with uncertainty swirling around the company’s business model.

Shares trade today at 28 times next year’s earnings, and while I fully expect the company to rebound from 2020, paying 28 times earnings for a restaurant chain that relies upon people packing its dining rooms seems unfathomable to me. I think it will be years before Ruth’s Chris gets back to prior earnings levels, which was $1.43 for 2019. Shares trade for 11.4 times 2019 earnings, so it isn’t like it is particularly cheap on historical earnings either. So, even if you’re uber-bullish and think the company will rebound to $1.40 in EPS fairly quickly (I’m a long way from making this leap), the stock is probably very close to fully valued already.

READ ALSO  Are Your Netflix Binges Killing The Planet?

In other words, if you want to own a restaurant stock, I think you can do so much better than chasing Ruth’s Chris higher. With the very business model it employed before the pandemic under assault, betting on normalized earnings is a fool’s errand in my view, and the stock should be sold.