Taiwan Semiconductor Manufacturing Company Could Still Be Heading For A Correction (NYSE:TSM)

The latest quarterly report from Taiwan Semiconductor Manufacturing Company or TSMC (TSM) easily beat guidance. But despite upbeat earnings, there’s some uncertainty clouding the outlook ahead. Specifically, the issue of inventory, a topic that was repeatedly raised during the earnings call. A potential inventory overhang may be looming on the horizon for TSMC, something that will be covered next.

Q3 revenue was NTD356B or about $12.1B using the prevailing exchange rate, an increase of 29.2% YoY in US$ terms and 21.6% in NTD. Net income was NTD137B or $4.7B. Gross margin rose to 53.4% thanks to a higher utilization rate. Other companies have also reported very high utilization rates, a sign that business is tight for foundries.

Q4 guidance calls for revenue of $12.4-12.7B, an increase of 20.8% YoY at the midpoint. All numbers that support the bull case for TSMC as some had argued for heading into 2020 in a previous article. Note that forex affected the quarterly numbers because the U.S. dollar fell against the NTD, something that is forecast to continue in Q4.

Overall, 2020 is shaping up to be a great year for TSMC with one quarter to go. TSMC expects to end the year with growth of about 30%, outperforming the 20% growth rate for foundries as a whole and much better than the mid-single digits for the semiconductor market excluding memory. Based on this, one could argue that TSMC has not much to be concerned about.

But while TSMC is doing very well at the moment, growth is nevertheless slowing down as shown below. Q1 grew by 45.2% YoY, but Q4 growth is expected to fall to less than half that amount based on guidance. In addition, there is reason to believe that the strong growth for foundry services in recent quarters is not reflective of end-user demand, which in turn could result in an inventory overhang for TSMC.

Why questions are being raised regarding inventory

Issues relating to inventories and the possible ramifications for TSMC have been raised before. For instance, a previous article goes into deeper detail as to why TSMC is likely to decelerate as inventory building is slowing down, possibly to be followed by destocking or an inventory correction.

The hypothesis as to why TSMC could be heading for an inventory correction basically rests on the premise that shipments of semiconductors have been running way ahead of where they should be based on end-user demand. No where can this be more clearly seen than in China. China’s imports of semiconductor chips have increased by 23% YoY in the first nine months of 2020 as shown below. A total of $252.2B has been spent YTD with $37.1B coming in the month of September, a new all-time record.

To understand why these numbers stand out, it is necessary to put them in proper perspective. China’s double-digit increase in imports comes against a backdrop of worsening economic conditions, both inside and outside of China. Consumer demand tends to drop along with a poor economy and with it demand for semiconductors. Most companies tend to be cautious under these conditions and will think twice about spending unless absolutely necessary. Greatly increasing imports of things for which there is not any obvious demand is inconsistent with this.

Unless of course there is another driver that compels companies to import chips as quickly as they can. A number of explanations have been offered. For instance, some are crediting the fast pace of imports to supply chain concerns relating to COVID-19. Others see increased demand for semiconductors due to “work from home” or “stay at home.” The global roll-out of 5G is considered another catalyst.

However, a closer look at trade statistics shows that COVID-19 is unlikely to be the primary catalyst in China. China’s imports began spiking back in 2017 as shown in the table below. Imports stayed more or less flat in the years heading into 2016, but then increased by more than 37% from 2016 to 2018. Note that China’s imports of chips increased in 2019 in terms of quantities, but fell in terms of value due to lower semiconductor prices.

The spike coincides with the run-up to the trade war between the U.S. and China, which suggests that the true driver of China’s buying spree is trade-related. It may or may not be a coincidence, but what is certain is that there was no COVID-19 or 5G roll-out back then. COVID-19 may have aggravated the effect, but it was already in existence prior to that.

As China has stepped up imports, so too has worldwide semiconductor revenue. The table below shows that in the two years prior to the outbreak of the trade war in 2018, the market increased by over 38% from $339B to $469B. In the previous six years, revenue increased by just 14% from $298B in 2010 to $339B in 2016. The last four years in the semiconductor market have been unusual, to say the least.

TSMC believes it can overcome an inventory correction

The issue of inventories seems to be on the mind of quite a few people because the topic came up repeatedly during the earnings call. TSMC acknowledges inventories are above seasonal levels, but it also believes that inventories will continue to stay above where they’ve been historically.

READ ALSO  The plants costing UK homeowners over £10,000 to remove

TSMC believes that even if there is an inventory correction, the impact will be blunted by the recent trend of doing more things online and the impact that could have on semiconductor demand. From the Q3 earnings call:

“Okay, let me share with you again our view on inventory. In fact, we don’t worry too much about it because of the — as I said now, because of the pandemic, the digital transformation has been accelerated and that creates a lot of new demand, let me say that now. Looks like, take for example, now work from home, so now everybody buy a PC, every kid’s had to buy a PC. And then let’s look at again on 5G smartphones’ benefit, their advantage of bandwidth and the speed and low latency, everything. And people are going to need it in this digital transformation. And so even right now is that we expect the inventory is higher than historical high level, but the demand will pick up and in next year or the 2022, we are confident that demand will pick up. So that minimize or mitigate the impact of the inventory correction”

A transcript of the Q3 2020 earnings call can be found here.

Nevertheless, TSMC leaves open the possibility that the outstanding results from recent quarters could come to an end.

Quarterly earnings have been boosted by gross margins that are above the roughly 50% where TSMC believes they should be in the long run. But if China were to reduce semiconductor imports for whatever reason, utilization rates will drop. Lower utilization means lower gross margins, less profitability and less growth, if any. 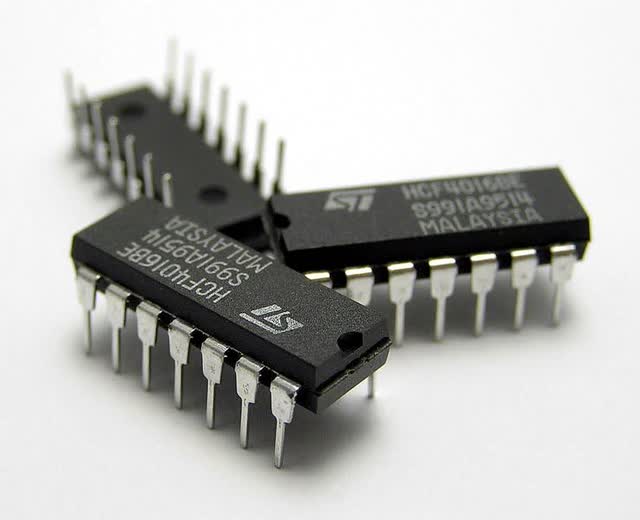 TSMC is currently doing great. The latest quarterly earnings show once again double-digit growth for both the top line and the bottom line. TSMC seems to be the beneficiary of strong demand for semiconductors and foundries by extension. However, growth looks to be slowing down as 2020 comes to an end. Moreover, there is reason to believe that real demand for semiconductors is much lower than one would assume based on the double-digit increase in revenue and EPS at TSMC.

Historical trade data suggest that the four years since 2016 have been unusual for the semiconductor market. One could argue the numbers out of China look unsustainable. The trajectory of Chinese imports suggests that the increase in imports is not driven by real demand, but by worries that Chinese companies could get cut off from the semiconductors they need because of U.S. sanctions. The result has been inventory building, which has boosted growth at TSMC.

China’s huge buying spree of chips may be great for a company like TSMC, but the question is how long this can last. If Chinese companies stop importing because they no longer can or they no longer want to, buying patterns could revert back to resembling the ones up to 2016. A semiconductor market that was not only much smaller, but also grew much slower. Both would be bad for TSMC.

The response from TSMC is that inventories will remain elevated for the time being. But a number of companies like Huawei are no longer able to add to inventories the way they could prior to September. These companies have no other choice than to begin the process of destocking. This could last a long time since Chinese companies could be sitting on huge inventories if trade statistics are any indication. The more inventories there are, the longer an inventory correction can last.

TSMC also points out that the COVID-19 pandemic has led to changes in society like “work from home,” which could mitigate to some extent the impact of an inventory correction. On the other hand, there are large numbers of employees in the restaurant, hospitality and other industries for whom working remotely is not a possibility.

If people need to work from home or stay at home because there’s a pandemic, then it’s also likely there will be people in financial distress because of this same pandemic. People falling in the second group are unlikely to keep spending the way they used to, which could negate the boost in semiconductor demand from the first group. Frankly, the second group is more likely to outnumber the first group. None of which bodes well for semiconductor demand. It’s hard to see how a poor economy in most of the world will not affect consumer demand and semiconductors, especially if China is no longer masking real demand with inventory building.

I am bullish on TSMC since the company looks to be fine in the long run. Having said that, the fact that China seems to be propping up demand at TSMC is a concern. If or when China stops, TSMC could see its growth fall off a cliff with China no longer increasing imports at a 23% clip. Already, companies like Huawei can no longer buy what they used to from TSMC. For them, using inventories accumulated in prior years is the way to go. Odds are TSMC will have to put up with an inventory overhang in 2021, if only to make up for the excesses in the years prior.

Previous PostRussian Destroyers Are Escorting Iranian Tankers In Mediterranean Amid US-UK ThreatsNext PostA patchwork of red, yellow and green – A second wave of covid-19 sends much of Europe back into lockdown | Europe