Anyone who even might have a treatment, let alone a cure, for coronavirus (or COVID-19) is of great interest right now. Therefore, so is Synairgen (OTC:SYGGF). The company has a treatment for the lung problems the virus can cause just going into Phase II clinical trial. It is also fully funded through this period, covering its burn rate with already received cash.

Yes, obviously, trials are risky, but this may well be worth a little bit of your speculative money as a position.

So, we should – no, must – approach any such company with a certain amount of trepidation.

So, someone who has something that looks reasonable is going to gain attention, as has happened already to Synairgen.

That presence of the pandemic makes things rather easier. There are going to be no bureaucratic or paperwork delays here. Anything that works is going to be shuffled through the approvals system just as fast as forms can be typed and printed. It’s equally obvious that anything that does work is going to be bought. Finally here, given the pandemic, a milder eye is likely to be cast upon side-effects.

These are all good things for a small company trying to get a foothold. There’s not going to be a large marketing bill, for example. Assuming, of course, it works.

There have been many false starts with varied forms of interferon – it’s been hailed as the cure-all more than once before now. It’s also true that no one particularly controls, or can control, the item itself.

However, Synairgen has created a form of interferon that can be inhaled into the lungs – where, it is said, it can protect against the infections that COVID-19 makes the patient fall prey to.

Note that the drug was originally developed against the infections which lungs are prey to from other causes too. The current virus just gives a kick-start to the possible use.

The company has had a bad time of it, this is true. It was down 95% from its launch price as research continued, and not all that much seemed to come out of it. There’s also been an overhang of stock given that one of the Woodford funds had a holding which then got caught up in the liquidation of that fund. 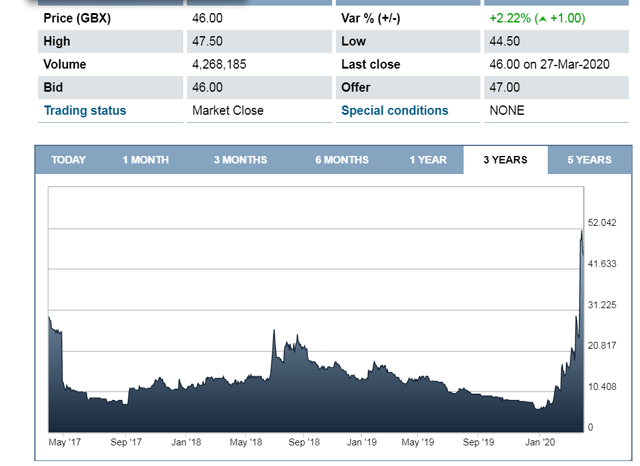 As we can see, there’s been a considerable rally just recently as the virus concentrated people’s minds on the potential value of the drug. If – very much if – it passes trials.

If this was how the company looked today, then it wouldn’t be interesting: 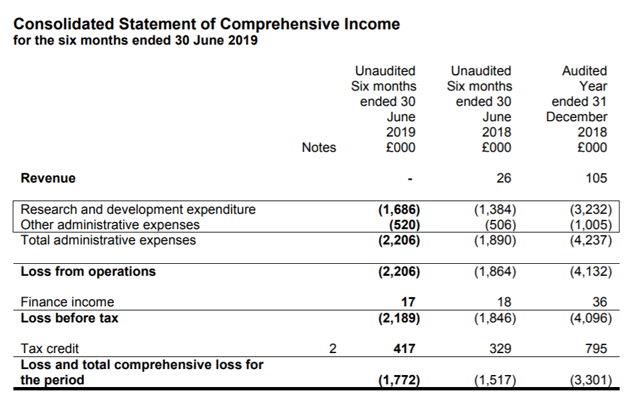 There’s nothing wrong there – the company’s burn rate is reasonable, it’s not ballooning, but obviously it’s going to need a capital raise sometime soon. And people, in this market, trying to get a capital raise away? They’d better have a really good story, and even then it would be tough.

Except, the company has done that capital raise since then:

Southampton, UK – 26 March 2020: Synairgen plc (AIM: SNG), the respiratory drug discovery and development company, is pleased to announce that further to the announcement made on 25 March 2020, (the “Launch Announcement”) the Bookbuild has now been successfully concluded with a heavily oversubscribed fundraising of a total of 40,000,000 new Ordinary Shares to be issued at a price of 35 pence per New Ordinary Share, (the “Issue Price”) raising gross proceeds for the Company of £14.0 million.

We’ve that burn rate well-covered then. But, of course, we want to know whether the company has actually got anything or not.

Synairgen’s drug preparation was really to see whether interferon beta would be helpful for people with COPD who then got ‘flu or other such lung/chest infections.

As we can imagine, this is all very interesting when we’ve another lung infection around. So, Phase II trials are starting:

COVID-19 Clinical Trial Synairgen’s Phase II trial in COVID-19 patients (SG016) will be a double-blind, placebo-controlled trial. Initially, the pilot phase of the study will involve 100 COVID-19 patients, will take place across a number of NHS trusts and has been adopted by the NIHR Respiratory Translational Research Collaboration which is comprised of leading centres in respiratory medicine in the UK whose internationally recognised experts are working together to accelerate development and discovery for COVID-19. A successful outcome from the pilot phase will inform onwards progression of SNG001 in COVID19 patients.

Yes, of course, it’s early days. But then, there’s that point that there’s not exactly a shortage of trial patients at present. Nor is there going to be any lack of interest in cooperating with the trial. Finally, any drug or treatment that is beneficial is going to be fast-tracked at this present time. Sure, there are formal processes, but we can also count on people reading and signing off on documents as they receive them and so on.

The In The City column in the Sunday Times is one of the very few useful share-tipping columns in the UK press these days. They say:

The run gave Synairgen the confidence last week to announce a £14m share placing, which brought in new investors including Polar Capital, while hedge fund Lansdowne increased its holding.

Directors also bought shares, which were issued at 35p each – a 32% discount to the closing price on the day before the placing was announced. The new money will provide enough cash to complete the trial and start manufacturing the drug, should it be approved.

For patients with pre-existing health conditions such as asthma, who are more at risk of complications from Covid-19, Synairgen could be on to a key treatment. Clinical trials are notoriously high-risk, but existing data shows its drug is well tolerated. Synairgen should have a part to play in the fightback against the pandemic. Buy.

Of course, we’ve this problem that no one at all currently knows whether the drug is going to work like people think it might. We face uncertainty here, not just risk.

And yet, we have a drug that is at least good enough to trial on humans. For the disease du jour, meaning that if it is effective at all, it will have near no problems with licencing and won’t have to spend much on marketing. The company is also though that process of testing.

It’s highly likely that the company will also benefit from streamlined approval – assuming any of that effectiveness.

So, yes, it’s a high risk that the clinical effectiveness exists at all. But all of the other usual problems have been swept away.

The downside here is that it’s a bust in that it doesn’t treat the infection. The upside is that it might – and also that near all of the other barriers to completion have been swept away. The company is financed, and the regulatory apparatus is primed to be helpful to it.

This is obviously significantly speculative, and none of us can possibly know how it’s going to perform in those trials. Yet, given all of the other issues, it’s worth a speculative punt. A small amount from the tail end of the portfolio, certainly nothing more than a percent or so of total holdings.

I concur with the Sunday Times – Synairgen stock is a Buy in modest quantities given the risks.